There’s a new mural in downtown Benton. Okay, it actually isn’t new. Some around these parts have seen it before, but not for a long time. It has been covered in mauve stucco for possibly decades – some local historians may be able to hazard a guess at the length of time. I said the mural isn’t new, but it’s new to some residents. 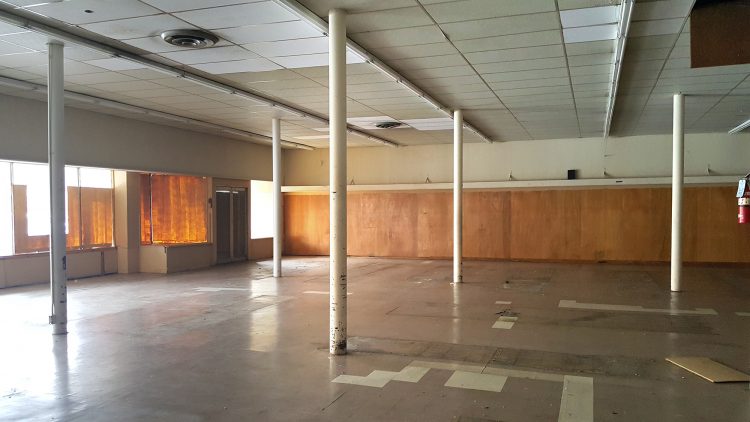 In March 2016, the inside of the “Dollar General building” is dark, dusty and plain. Photo by Shelli Poole.

The building hadn’t seen any type of business for quite a few seasons. The northwest corner of N. Market Street and West South Street in downtown Benton sat completely empty inside for about five years, except for dust and a few other obsolete remnants of the past. 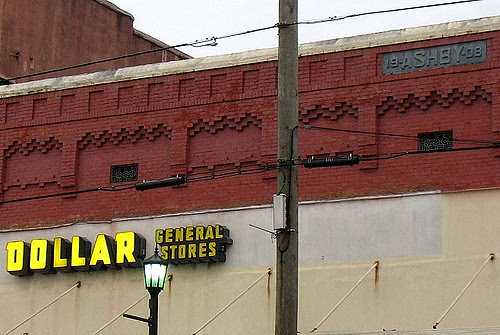 This photo of the building from 2015 bears the name “Ashby” in the provenance, and includes the date “1908.” -Photo by Shelli Poole

Prior to its vacant condition, it was a Dollar General store location. Before that for some time, including the 1940s, it was a Sterling, a five and dime type of store.

The property originally housed a doctor’s office. There’s an imprint of one doctor’s family name “Ashby” and “1908” at the top of the brick, facing Market Street. Dr. Ashby’s medical examining rooms are still upstairs. 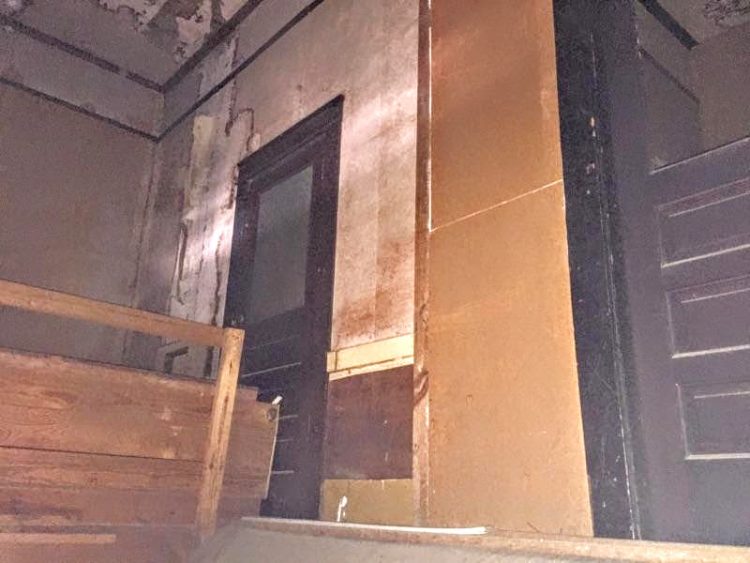 Dr. Ashby’s medical examining rooms are still located on the south side (South Street side) of the building, on the 2nd floor. Picture taken in March 2016 by Shelli Poole after Dollar General pulled out of downtown.

On Main Street, on the other side of downtown, was the location of a small but growing church – a branch of City Church, called Salt County. Pastor Josh Robertson has striven to integrate in the community and serve in different ways. Josh joined forces along the way with the Downtown Benton Partnership, a group of business owners, and eventually became President of the group. In the process, Robertson and the members of the church set their sights on that vacant storefront on Market Street.

They ended up leasing the space, but it would be months before they could move in, with quite a bit of renovations to be done. Finally, on August 11th, the doors were opened for the first group of people to enter for a meeting. The church to host a meeting of the Partnership. The inside of the building was transformed with clean floors and crisp walls, but there has been a revelation on the outside that has neighbors talking even more. 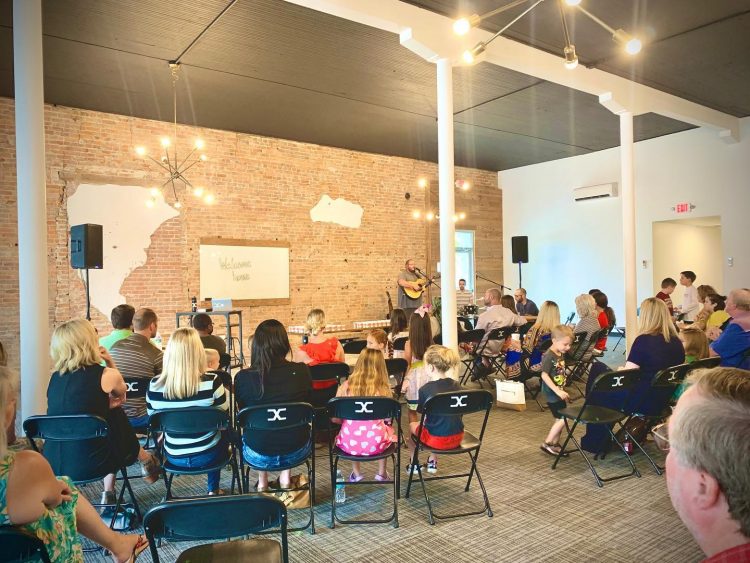 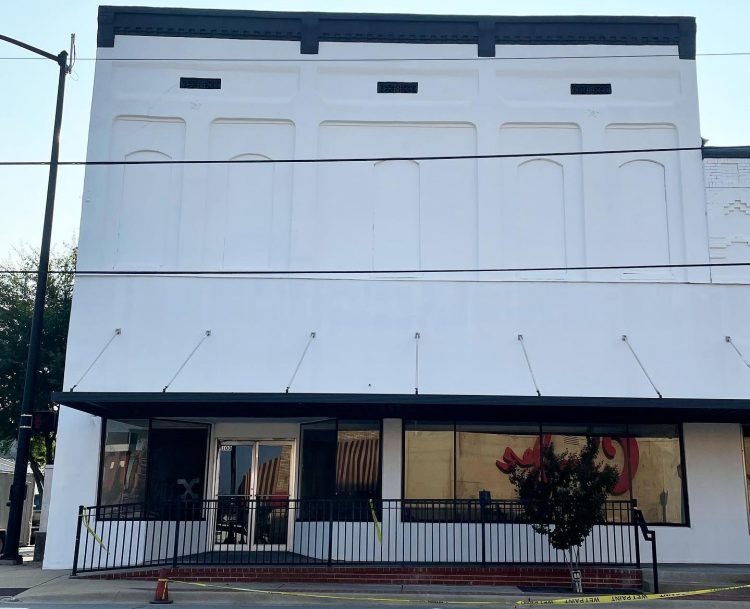 The front view of the building (facing Market Street) got a fresh update with white paint and black accents. Window seating in the church lends to convenient viewing of goings-on and passers-by on Market Street.

Kevin Malone is the owner of Paradise Pets, a few storefronts up Market Street from this new church location. He knew about a mural under the stucco outside that building and has a framed photo in his office (snapshot below) of the way it used to be. Well, some of it is pictured… But Malone knew that there was a giant sign painted with the Sterling name, along with a Dr. Pepper logo and the clock from the historical advertising campaign. 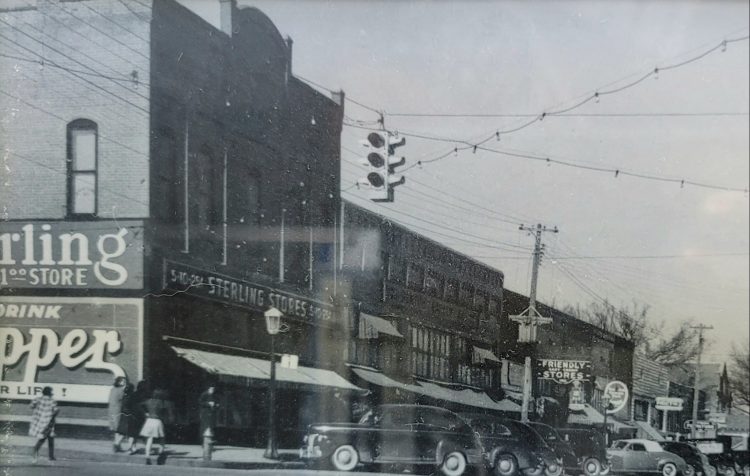 Sterling 5¢ to $1.00 Store. This photo is courtesy of Paradise Pets, 116 N. Market Street located at the round sign to the right in the above photo.

For around a week, a worker employed by the building owner, the Ferguson family, chipped away slowly at the stucco, attempting to reveal as much of the mural as possible without compromising the integrity of the structure. The product is below in a video and photos. 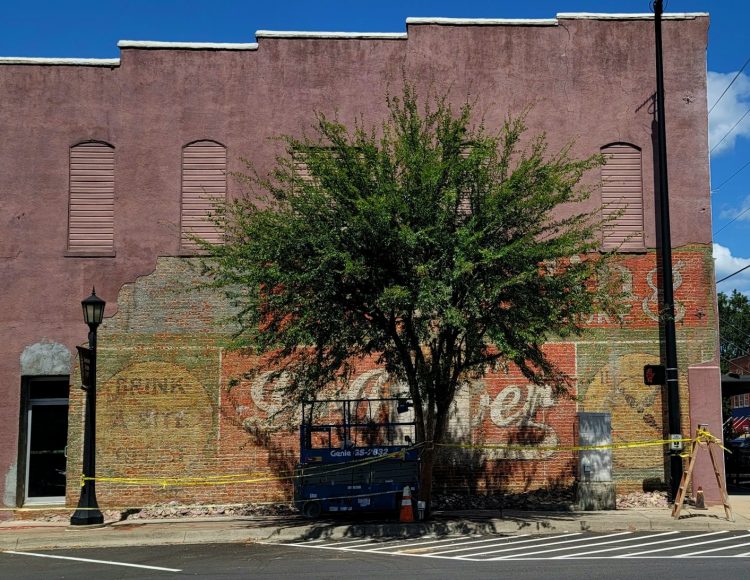 The wall facing south (facing South Street) has been taped off for work to proceed on removing the stucco covering. To the left of the tree, the Dr. Pepper section says “Drink a bite to eat,” a slogan associated with the recommended snack times displayed on the clock at right – 10 a.m., 2 p.m. and 4 p.m. This is an iconic advertising campaign by Dr. Pepper, suggesting that one should drink a Dr. Pepper at least 3 times per day. 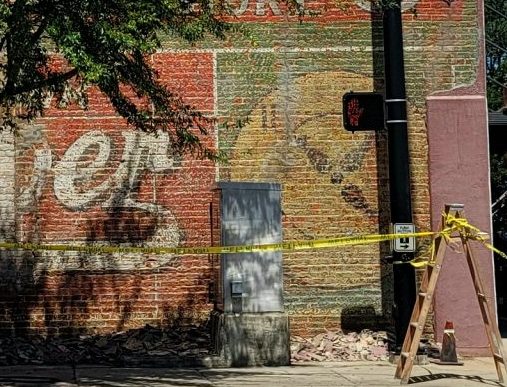 The persuasive words, “Drink a bite to eat.”

Local residents, delighted to see the mural resurface again, wondered if it would stay, or if it would be covered again. Robertson from the church said the plan is to find a way to cover the mural with a clear protectant and keep it visible. It’s difficult to see the portion of the mural behind the tree, but there is a section missing. The “epp” in Dr. Pepper was painted over a window.

This writer is currently unsure of the order of the events, but it seems the window might have been original to the wall on South Street, then boarded and painted over, but perhaps the covering didn’t survive during a later revamp, and therefore, no “epp.” At the time of publication, there was not a definite plan to recreate the “epp.”

There’s an “epp” missing in this Dr. Pepper. Photo by Shelli Poole.