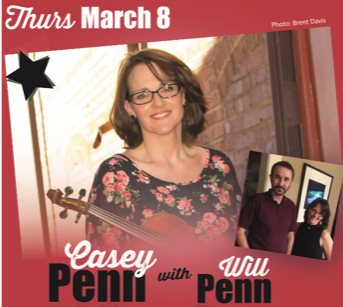 Come to Benton for a night of live music on Thursday, March 8th at 7pm. Casey Penn will sing and play the guitar and fiddle, and Will Penn will accompany with his upright bass. This event will take place at Ovation Music Academy on 406 W South Street. For more info, call 870-405-6856.

“When I am listening to Casey Penn sing, I find myself in a blanket of goose bumps. Her voice goes right to my soul.” – Dana Landers, Singer/Songwriter

An awarded writer and singer-songwriter based in Central Arkansas, Casey Penn is becoming known throughout Arkansas and Tennessee for pure vocals, heartfelt songs, and rich fiddle. She feels a kinship with music of many genres and works to spread her own style, her own voice, as best she can while writing songs that others can relate to. She says, “I want to sing honest songs, and I hope that my delivery is personal in a way that rewards listeners for spending their precious time with me.”

With co-writer Rodger King, Penn won an Arkansas-wide songwriting competition hosted by Infrared Studios. Winnings resulted in the 2016 LP, KINGPENN, which featured original songs by both artists. In a review by nationally published Bluegrass Unlimited, Bill Conger writes of the album, “One of the greatest joys in reviewing CDs is the discovery of new music, especially the quality of Rodger King and Casey Penn. Penn’s cut-to-the-soul vocals are featured in several of the songs … My favorite song is the opening cut, ‘Oceans (I Have Cried),’ which won an honorable mention in the 2016 Hazel Dickens Bluegrass Songwriting Competition.”

Penn performs regularly with family and friends and with area artists Buddy Case, Rodger King and others. On March 8, 2018, at Ovation Music Academy, she will be joined by her husband – and skilled upright bass player – William Penn. The couple will present an eclectic helping of worthy songs, original and otherwise.