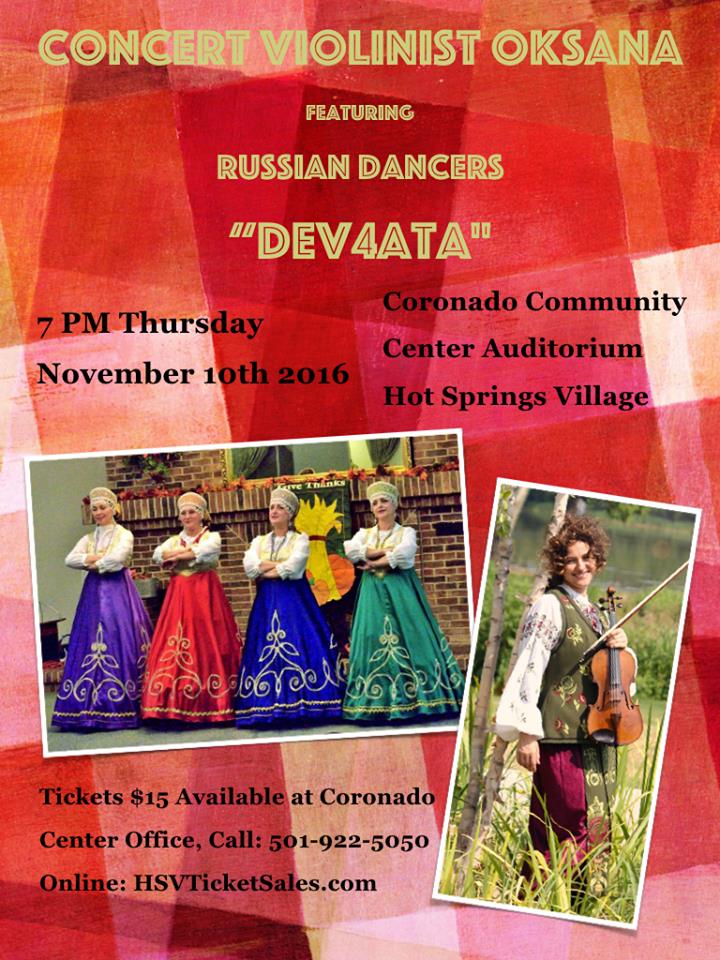 Concert Violinist Oksana, will give a concert at Coronado Community Center Auditorium in Hot Springs Village for the first time featuring Larisa Denman on the piano and Russian dancers, “Dev4ata” (Devchata) on November 10th at 7pm.

Come to enjoy our unique performance of traditional Russian dances and beautiful music. Concert Violinist Oksana has had many performances throughout Europe and the United States, playing everything from classical to jazz to folk music. Currently Oksana plays in two symphony orchestras, including the Texarkana and Ft. Smith symphonies, as well as run her own music lesson studio in Benton, AR.

We are excited to present to you the unique performance of music, dance, and culture of the Russian traditions. Russian dance group, “Dev4ata” who have resided in Pine Bluff and Hot Springs for many years, share Russian traditions in the United States by creating their own costumes, choreographing dances, and sharing the rich culture of the Russian people. The group formed when four beautiful ladies from different Russian towns met in Pine Bluff. Yelena House and Svetlana Clemmons are twins who both hold a profession in Geology met Larisa Kachowski, who works as a doctor, and later on, Olga Calvert, a philologist, moved to Pine Bluff and formed a Russian collective. They regularly get together to sew costumes and create their own dances.

The virtuoso pianist and composer, Larisa Denman, has had many performances in Europe. She met Oksana in St. Petersburg, Russia, 20 years ago, and ever since then they have played as a duo, creating music that will touch your heart.