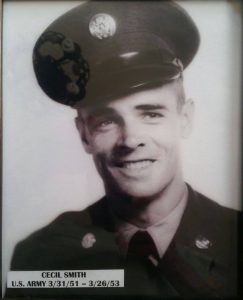 Cecil served in the U. S. Army during the Korean War and retired from Alcoa as a pipe fitter. He was a member of Crossroads Missionary Baptist Church.

Funeral services will be 11:00 a.m. Saturday, August 27 at Crossroads Missionary Baptist Church with burial at Fairplay Cemetery. Bro. Larry Campbell will be officiating.