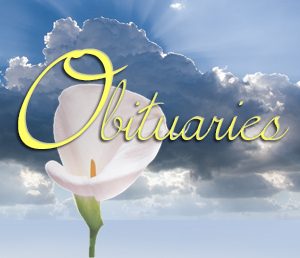 LINDA WIGHT, age 71, of Mabelvale, died on August 10. She was born in Washington, DC, on March 15, 1948, to the late James Henry Wight, Jr. and Helen Lanham Wight. Linda is survived by her loving husband, Gabriel Coll; and brothers, James (Rene) Wight, Matthew (Belinda) Wight and Thomas (Karen) Wight. She retired from the Little Rock School District. A memorial service will be held at River of Life Assembly of God Church, 9800 Nash Lane, Mabelvale, on Thursday, August 15, at 2PM, Online guest book at www.ashbyfuneralhome.com

LILLIE MARIE TANNER, 93, of Traskwood, Arkansas passed away peacefully in her home Wednesday. She was preceded in death by her husband, Olin Tanner and son, James “Ronnie” Tanner. She is survived by her daughter Patsy Shuffield, grandchildren Steven and Brian Shuffield, Lesha and Ronnie Tanner, 8 great grandchildren, and 10 great-great grandchildren. Services will be held at Glen Rose Missionary Baptist Church. Visitation will begin at 12pm. The ceremony will be at 1pm, followed by the burial at FairPlay Cemetery. www.ashbyfuneralhome.com

MARY ELNORA WYLIE, 93, of Alexander, went to her Heavenly Home on August, 17, 2019. She was born on December 15, 1925. She was preceded in death by her husband, William Franklin Wylie, of 39 years, her sisters Ruby Jewel Lancaster and Hazel Burruss, her brother, James Crawford Burruss, a great-grandchild Bryce Alan Manees and a great-great grandchild, Aaliyah Ka’lynn Murray, She leaves behind her children, Cheryl Lynn Walker(David) of Boyd, TX, William Roy Wylie(Debbie) of Alexander, AR, Carroll Faye Adams(Bill) of Yuma, AZ, James Franklin Wylie(Sandy) of Alexander, AR and Janice Gayle Connor(Joe) of Dry Prong, LA, 11 grandchildren, 22 great-grandchildren and 6 great-great children. She loved all of grand-pets. She also left behind many nephews, nieces and a host of friends, Visitation will be 9:00 to 10:00 a.m. Monday, August 19 at Ashby Funeral Home with funeral services beginning at 10:00 a.m. Bro. Sid Sample and Bro. John Venable will be officiating.  Burial to follow at Pleasant Hill Cemetery.

TERESA DAVIS BRACCIODIETA was born in New York, NY on 11/ 30/1947 and passed away on  08/ 14,/2019 in Hot Springs Village, AR. She is preceded in death by her parents, Ellen and Edward Davis. Teresa is survived by her husband, Robert Bracciodieta, daughter, Ellen Gregory, son-in-law, Brent Gregory, grandson, Jacob Gregory, brother, Edward Davis, and sister-in-law, Patsy Davis. Service time and date will be announced at a later date. CedarVale Funeral Home of the Hot Springs Village.

HORACE RODNEY CHRISTIAN, Jr  55, of Bryant, Arkansas passed away August 12, 2019. He was born June 19, 1964 in Forrest City, Arkansas to the late Horace Rodney, Sr. and Allie (Kelsoe) Shepherd. Rodney loved being outside spending time on his boat, participating in water sports, and camping. He was a “man of leisure.” Preceding Rodney in death are his parents; and brothers: Jimbo Christian, Barry Partain, and Ronnie Partain; and sister, Dorothy Gustavis. He leaves behind to cherish his memory his loving wife of thirty-five years, Nancy Christian of Bryant, Arkansas; son, David Lee Christian and wife Jennifer of Bryant, Arkansas; four brothers: Delane Partain and wife Anne of Bryant, Arkansas, Andy Partain and wife Debbie of Oklahoma, Larry Taylor of Palestine, Arkansas, and Kelly Taylor and wife Nancy of Wynne, Arkansas; sister, Jane Madden of Forrest City, Arkansas; and many family members and friends who love him and will miss him always. Reception visitation will be held from 10:00-11:00 AM, Saturday, August 17 at Smith-Benton Funeral Home, 322 N. Market Street, Benton, Arkansas. Memorial service to follow at 11:00 AM. Services entrusted to Smith-Benton Funeral Home. Online guestbook:www.SmithFamilyCares.com

PERCY LEE WEST, 84, of Benton, departed this life and entered into eternity on August 13, 2019. He was born on April 15, 1935, in Seminole, Oklahoma, to the late Paris and Rebbecca (Haney) West. On July 3, 1954, Percy married Jimmy Jo (Overbey) West, and together they raised their four children in Seminole before moving to Benton, Arkansas, in the early 1970s. Percy was a man of resolute faith with unwavering love for and devotion to his family. We remember him as a strong, kind husband, father, and grandfather, with a quick smile and a guitar close by. We remember how much he liked to watch John Wayne movies and the Dallas Cowboys football, how he told stories of his life in Oklahoma and on the road as an insurance salesman, and how he used his musical talent as a guitarist in the church band. We remember his delight for gathering around the table with his family for holidays and special occasions. His big smiles and bear hugs reminded all of us how much he loved us. Most importantly, we remember his steadfast assurance in his salvation through Christ, which gives us hope that we will be reunited with him in Heaven someday. Percy’s love for God and family inspires us to make time for the people in our lives who matter most so that our lives will be as his: Full of memories that bind us together, make us stronger, and give us a legacy to celebrate.  Percy leaves behind to cherish his memory his loving wife of 65 years, Jimmy Jo West of Benton, Arkansas; his children Delana Whitfield and husband Rudy of Glen Rose, Arkansas, Sheila Young and husband Rick of Benton, Arkansas, Ricky West and wife Robin of Benton, Arkansas, and Belinda Canady and husband Joe of Benton Arkansas; nine grandchildren: Shawna Anderson, Ashleigh Rosinbaum and husband Jeff, Whitney King and husband Brett, Tara Young, Chris Canady and wife Courtny, Meghan Whitfield and husband Anthony O’Brien, Bryson West and wife Julia, Casey Canady and wife Tara, and Ryan Young and wife Chelsea; eight great-grandchildren; brother, Charles West and wife Dorthea of Oklahoma City, Oklahoma; sister, Bessie Taylor of Midland, Texas; and many family members and friends.  Preceding Percy in death are his parents, six brothers, and three sisters.  Reception visitation will be held from 1 – 2pm on Friday, August 16, at Smith-Benton Funeral Home, 322 N. Market Street, Benton, Arkansas. Funeral service, officiated by Sharon McCormack, following at 2pm. Burial will follow at Smith-Rosemont Cemetery with Chris Canady, Bryson West, Casey Canady, Joe Canady, Ryan Young, and Jeff Rosinbaum assisting as pallbearers.  Services entrusted to Smith-Benton Funeral Home. Guestbook: www.SmithFamilyCares.com

CHRISTINE GASTON was born on February 9, 1933 and passed away on Monday, August 5, 2019  Christine was a resident of Jessieville, Arkansas at the time of passing  Visitation will be held 12:00 p.m-1:00 pm, Thursday at Caruth-Village Funeral Home Chapel with service beginning at 1:00 p.m. Burial to follow at Shiloh Cemetery in Jessieville, AR.

AUDREY CHASTAIN, 91, of Bryant, passed away August 14, 2019 with her family by her side. Born in Point, Texas to James Franklin and Marena Prince Fenter, she was a member of Geyer Springs First Baptist Church. She worked in retail for many years and also at her church’s daycare center.  She is survived by her children, Jerry Travis (Deloris) of Loganville, Georgia, Nancy Gail Medlin (Norris) of Bryant, Tammy Sue Magby (Terry) of Benton and Terry Leon Chastain (Julie) of North Little Rock; her twin brother, Aubrey Leon Fenter; fifteen grandchildren, twenty great-grandchildren and a host of other family and friends.  She was preceded in death by her parents, her husband, John Travis (Buster) Chastain, twin sons, three sisters and four brothers.  Services will be held on Saturday, August 17 at 12:00 noon, preceded by visitation beginning at 11:00 a.m  at Geyer Springs First Baptist Church, officiated by Max Pyron. Burial will follow at 3:30 p.m. at Pinecrest Memorial Park in Alexander. Memorials may be made to Geyer Springs First Baptist Building Fund, 12400 I-30, Little Rock, AR 72210 or to Arkansas Hospice, 14 Parkstone Circle, North Little Rock, AR 72116.  Arrangements by Little Rock Funeral Home, 8801 Knoedl Ct  (501)224-2200. Mrs. Chastain’s online guestbook may be signed at www.littlerockfuneralhome.com

KELLY RENEE DIXON, 40, of Benton, went to her Heavenly Home on August 8th, 2019  Born on September 3rd, 1978 in Little Rock, Arkansas, Kelly was known for her energetic, “firecracker” spirit, contagious laugh, and gorgeous red hair  She had a warm personality that could make anyone smile and loved to talk to her family and friends for hours. Even though she may have complained about it a bit, she really enjoyed hosting large family gatherings and was the first in the kitchen to help cook meals for everyone. Having all of her loved ones close was so important to her. Kelly will always be the light of her family’s life and will be remembered for the wonderful and loving mother, daughter, sister, aunt and friend she is  Kelly is survived by her husband: Aaron; her two children: Mark and Kyla; her parents: Mark and Barbara Rice; her brothers: Michael Rice and Andy Emerson; her sister: Amber McAdoo and a large extended family who will all miss her dearly  Pallbearers are Christopher Rice, Chancy McAdoo, Danny Dixon, Jaymie Dixon, Jared Dixon and Joseph Dixon.