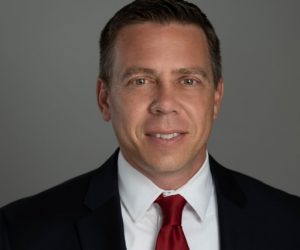 Currently, Newton presides over misdemeanor criminal offenses, traffic violations, and ordinance citations for the City of Benton, the City of Alexander, and all unincorporated areas of Saline County; conducts bond hearings for individuals arrested for felony offenses in Saline County; and determines whether probable cause exists for the issuance of seach and arrest warrants.

Newton has also served as a Special Justice on the Arkansas Supreme Court.

Additionally, Newton served a total of four years as a Judicial Law Clerk for two federal Judges:  Hon. Lavenski Smith, Chief Judge of the U.S. Court of Appeals, Eighth Circuit; and the Hon. Margaret Mahoney, U.S. Bankruptcy Judge. As Newton explained, a Judicial Law Clerk is an attorney position on a Judge’s staff that works directly for the Judge providing research, analysis, and counsel to the Judge in making legal determinations on issues before the Court.

“I was fortunate to learn first-hand from two highly-respected judges. The experience provided considerable legal knowledge, but more importantly, it trained me to truly view cases from a neutral judicial standpoint, rather than from the often-biased view of an attorney seeking a particular outcome. Those judges also showed me how to run an honorable, efficient courtroom, where everyone was treated with dignity and respect. I strive to run my courtroom in the same manner.” Newton said.

The son of a fireman and a public school teacher, Newton cited the values instilled in him from a young age as influential to his campaign. “I was blessed with parents that taught us the importance of faith, hard work, and the value of public service.” Newton said. “This is essentially what my campaign is about.”

Newton and his wife Shannon Samples Newton, President of the Arkansas Trucking Association, are longtime residents of Saline County, and their children, Nash and Nyla, attend Bryant Public Schools. “We love this community,” Newton added. “My wife grew up in Benton; her family roots are deep here. Her parents live here, and their parents all lived here, making our children, at least, fourth generation Saline County residents. Its just a wonderful place to live, and I would be honored to serve as Circuit Judge for this great county.”

The Third Division Circuit Judge position Newton is running for is currently held by the Honorable Grisham Phillips, who will be retiring at the end of his current term, leaving his seat on the bench up for election on March 3, 2020.

See other Candidates and Election Info at www.mysaline.com/elections-2020/