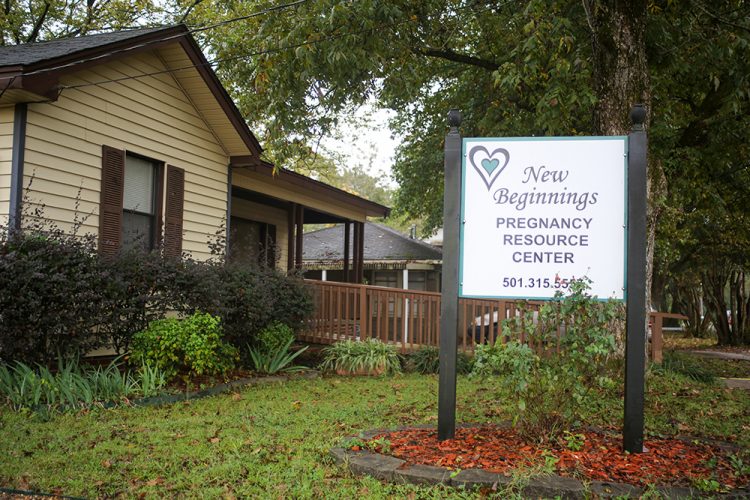 New Beginnings Pregnancy Center in Benton, Arkansas, was established in 2003 as a nonprofit ministry to pregnant teens. Over the years, it has grown to include a resource center and pregnancy test center, serving women of any age who are in need of the ministry’s resources. (WMU photo by Pam Henderson)

BENTON, Ark.—New Beginnings Pregnancy Center in Benton, Arkansas, has had a few new beginnings of its own over the past several years. Originally established in 2003 as a nonprofit ministry to pregnant teens, it has grown to serve women of any age who can benefit from the ministry’s resources.

In recent years, New Beginnings has expanded to include ultrasound exams and pregnancy testing in addition to offering material resources such as diapers, wipes, baby formula and gently used clothes for babies up to 24 months old. The center also provides confidential counseling, mentoring, parenting classes and Bible studies. 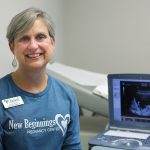 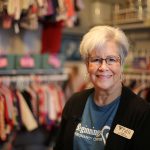 Snowden, whose professional background includes 30 years as a speech pathologist in public schools, coordinates the ministry’s resource center in a small, renovated house located on a side street behind the offices of Central Baptist Association. Executive Director Janet Dixon, a nurse with training in OB ultrasounds, supervises the pregnancy test center housed in a dedicated wing of the associational office.

“In the Central Arkansas area, there is a lot of poverty,” Snowden explained. “We do have a certain young woman who tends to come into our center needing help. Typically, they have not had a good experience in their own family.

“Most of these young women do not have much financial support,” she added. “Some are employed, some are not, but those who are employed typically are those who make minimum wage so there’s just not a lot of extra money to go around.”

Noting that “we believe that whoever comes to our door, God brought them here for a reason,” Snowden said, “Many times they have had no experience of knowing who Jesus is so we get the privilege of telling them about Jesus. That is our honor and our joy to be able to do.”

Woman’s Missionary Union groups, including Women on Mission at nearby First Baptist Church of Benton, partner with the ministry by donating diapers, wipes and other needed items. A couple of area quilt guilds and volunteers at a senior citizens center craft homemade quilts and afghans for the pregnancy center to distribute. Rose Donoher (left) is among volunteers who lead an eight-week Bible study for expectant mothers at New Beginnings Pregnancy Center in Benton, Arkansas. Each client who attends the Bible study sessions receives a diaper bag and a variety of care items to fill it for their new baby. (WMU photo by Pam Henderson)

Motivated to “make much of Jesus”

As she works with volunteers and offers encouragement to the women who turn to New Beginnings for help, “my motivation is to make much of Jesus,” Snowden shared. “I want these young women to know His love.”

Affirming that Christ “captured my heart” at age 19, Snowden reflected, “Over the course of my lifetime, He has just drawn me so close to Him.” Longing for New Beginnings’ clients to experience that same spiritual relationship, she said, “I want them to know exactly who He is and the dimensions of His love, which are higher than the heavens.”

Diana Lewis, a longtime member of Central Association’s Missions Development Council, recounted God’s clear leadership in founding the ministry and expanding in 2015 to include the test center and ultrasound.

Recalling that there were “three really big things that we had to accomplish in order to be able to do the medical part,” she said the must-have list included a facility, a medical director and an ultrasound machine. In short order, the association offered part of its facility to house the test center and Lewis discovered that her new medical doctor had previous experience as a pregnancy center medical director. He readily agreed to serve in that role for New Beginnings.

The final hurdle was acquiring a $26,000 ultrasound machine. A local organization offered to contribute half the money if New Beginnings could raise the other half. Lewis, a retired North American missionary and avid quilter, organized a silent auction and quilt auction.

“The next day after that, our director came to my house and we counted the money,” Lewis said. “And we had almost to the dollar exactly what we needed for our half of the ultrasound machine. To me, it’s a miraculous story of how God laid this on our director’s heart and then we all caught the vision for it – and then just boom, boom, boom, God laid before us the things that we needed most to be able to make it happen.” 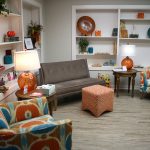 New Beginnings, which expanded in 2015 to include a pregnancy test center and ultrasound exams, is housed in the facilities of Central Baptist Association. The test center, which includes a comfortable, inviting waiting room, provides expectant mothers with free, confidential pregnancy testing and counseling. (WMU photo by Pam Henderson) Janet Dixon, executive director of New Beginnings, and other staff members are trained and qualified to provide limited ultrasound exams for clients. As expectant parents and family members view the ultrasound, Dixon said, “The tears come when they get to see that heartbeat. That is always amazing to them. It just speaks to God’s creation.” (WMU photo by Pam Henderson) 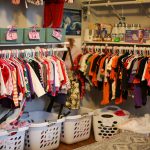 New Beginnings’ Blessings Store offers diapers, formula, gently used baby clothes and other resources for clients’ newborn babies and children up to age 2. Clients can earn Baby Bucks to spend at the store by attending parenting classes and other activities at the pregnancy resource center. (WMU photo by Pam Henderson)

Dixon, who often provides pregnancy counseling for clients, views her role as executive director as an opportunity to offer both practical and spiritual aid for women and their families.

“As we help them in motherhood, we’re pointing them to Christ,” Dixon said. She added that resources from ultrasounds to diapers are “filling a need for them that day, just like we would give a cold drink of water to someone.”

Noting that they often come alongside clients who are “abortion vulnerable” or “abortion-minded,” Dixon said, “Some of the times they are shocked about being pregnant and they then need to work through their attitudes about their pregnancy and what their plans are.”

Those moments, she added, “are our opportunities to talk to them about fetal development and about what the Bible has to say about babies and about their value” as well as God’s view that each one of them are “valuable women.”

Emphasizing that “we are speaking the truth in love,” Dixon said, “We are not manipulating. We do not tell them what we think they should do.

“We are very truth-based,” she reiterated. “We tell them facts about fetal development, things that I would tell them if I was in a clinic that’s not faith-based. As a nurse practitioner, that’s important to me.

“I see it as empowering them to make a good decision for their baby and for themselves,” Dixon shared. “Whatever they do, we want them to feel loved.” 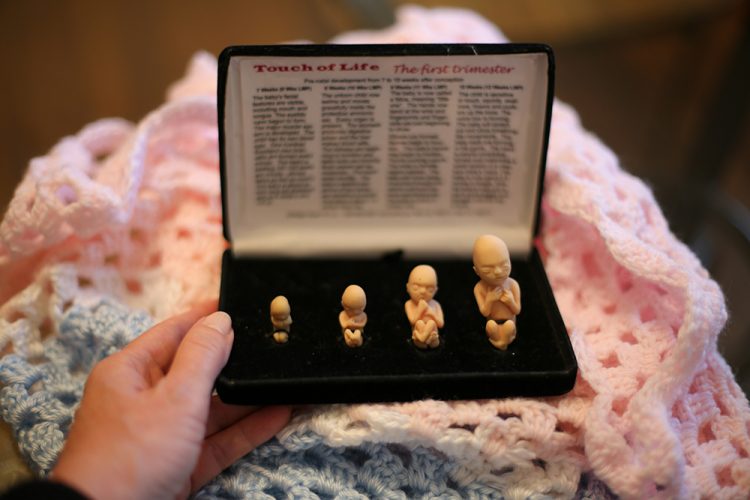 Providing pregnancy testing, parenting classes, Bible studies and other resources, New Beginnings Pregnancy Center Executive Director Janet Dixon said the ministry also offers opportunities to talk to expectant parents “about fetal development and about what the Bible has to say about babies and about their value.” (WMU photo by Pam Henderson)

That unconditional love and acceptance is expressed through such creative programs as a diaper bag ministry where clients can select items – including the cherished, one-of-a-kind quilts and afghans – to fill a diaper bag after attending Bible study classes each week. They also can earn Baby Bucks by attending parenting classes and other activities, redeeming the coupons for diapers, formula and baby clothes.

“No real money exchanges hands but they have an accountability and a responsibility on their part,” Snowden pointed out. “It is a great incentive to them. Plus, for us, we get to know them and they get to know us and we build a relationship with these young women.”

As New Beginnings Pregnancy Center helps women and families navigate their own new beginnings in life, Snowden concluded, “We are in hopes that what we do here will help change the trajectory of their lives – that they will see that they have a purpose and a destiny and every plan that God has for them is a good plan.”

To learn more about ministry opportunities through New Beginnings Pregnancy Center, visit www.nbpregnancy.com or contact Janet Dixon at [email protected]. To support the vision and mission of Women’s Missionary Union (WMU), give to the Vision Fund at www.wmufoundation.com/vision.