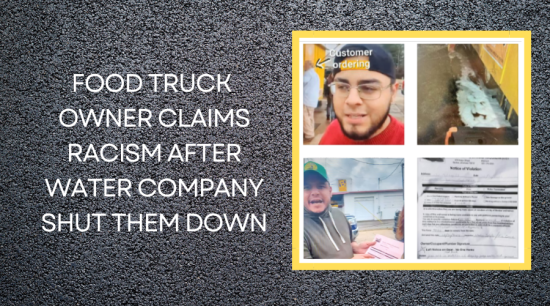 A food truck operating in the city limits of Benton, Arkansas said they were racially profiled after someone from the utility company shut them down. There is a lot to this story. I have attempted to gather all the info so you can decide. Let’s start with what the food truck is saying:

You may have already heard about the incident where Mawmaw’s House, a food truck, also known as Casa de la Abuelita, clashed with a representative from Benton Utilities (BU). BU is the provider of electricity, water and wastewater within the city limits of Benton. Most people became aware of the issue when one of the owners of the food truck began streaming live video on their business page (see below). The videos were shared over and over throughout the next few days.

The first video begins at 2:12 p.m. Friday, December 30, 2022, with Erick Sekely (in red), the chef at Mawmaw’s, which was operating at 1130 Military Road. He began streaming live after a representative of BU came to the site of the food truck to serve a citation.

While the citation was for illegally dumping gray water, those with the food truck say they never did that. Gray water is water that is used and may have soap, dirt, food and grease in it. The following is a policy from the Arkansas Department of Health that food trucks are given when they set up for business. 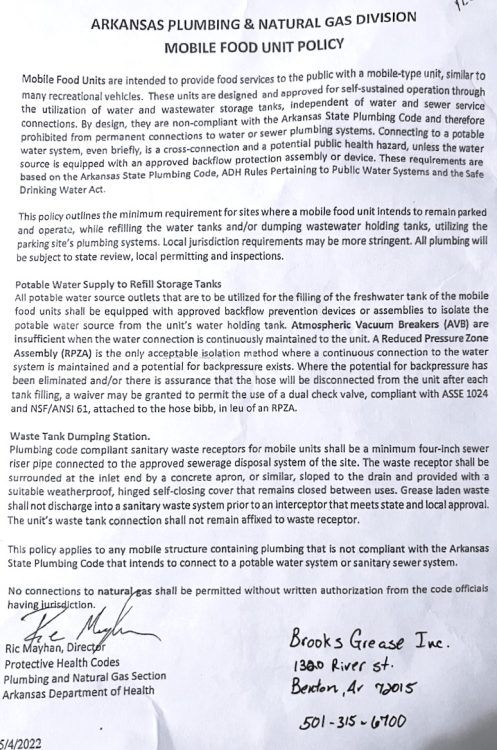 Sekely stated in his video that an employee was cleaning the parking lot with a hose and the BUs representative cited them for dumping gray water. However, a Benton citizen posted the following photos in the comments of Sekely’s video:

Geovanny (Geo) and Neena Villagran are the owners of the food truck. They showed in the video their license to do business in the City of Benton is current until December 31, 2023. They also showed the citation by Benton Utilities that said they have 48 hours to comply.

Shortly after Sekely’s video, Mr. Villagran posted a live video (see below), beginning at 3:14 p.m. on December 30, 2022, to continue coverage of the situation that day. At this point, the situation had escalated and Mr. Villagran said the reason was racism. He made it clear that he was claiming just one employee who was giving them a hard time apparently due to racial profiling. 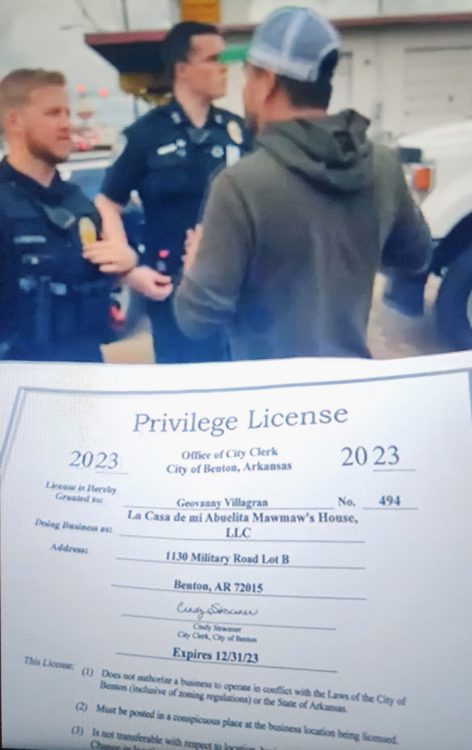 Chef Sekely shows the business license from the City of Benton is current. 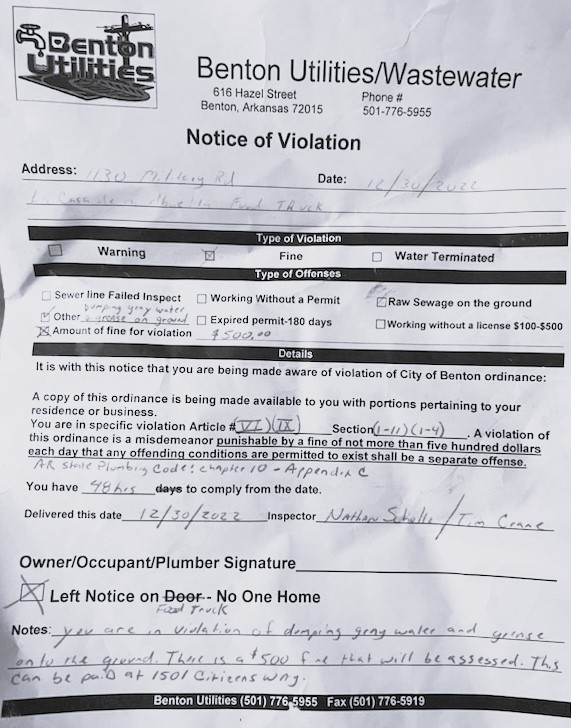 The above Notice of Violation was given to Mawmaw’s by Benton Utilities. It reads, “You are in violation of dumping gray water and grease onto the ground. There is a $500 fine that will be assessed. This can be paid at 1501 Citizens Way.” It’s showing the notice is on December 30, 2022, and they have 48 hours to comply. It’s showing it was issued by BU employees Nathan Schultz and Tim Crane.

The food truck is saying that they have paid rent for the space and paid a deposit to turn on utilities, but that the representative from Benton Utilities came and took out their meter so they couldn’t use the power.

This food truck is well liked. Customers continued to come order food even as the representative from Benton Utilities, along with two officers from the Benton Police Department (called to the scene by the food truck) attempted to resolve the issue. You can see in the screenshot below that a customer is ordering while all this is going on. Their following is part of the reason their story went viral. Another customer, known as DrGonzo online, posted his own video (below). He saw the food truck’s live video and rushed to the scene to give his support, make a video, and… also to order some food.

Because Benton Utilities was getting questions from people about it, they issued a statement telling their side of the story. You can read that full statement on their Facebook page and we have it showing below: 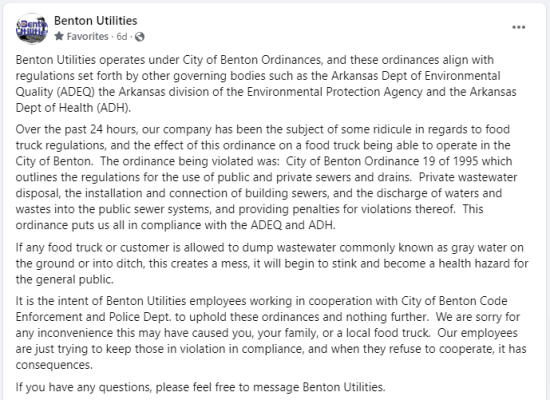 Over the past 24 hours, our company has been the subject of some ridicule in regards to food truck regulations, and the effect of this ordinance on a food truck being able to operate in the City of Benton. The ordinance being violated was: City of Benton Ordinance 19 of 1995 which outlines the regulations for the use of public and private sewers and drains. Private wastewater disposal, the installation and connection of building sewers, and the discharge of waters and wastes into the public sewer systems, and providing penalties for violations thereof. This ordinance puts us all in compliance with the ADEQ and ADH.

If any food truck or customer is allowed to dump wastewater commonly known as gray water on the ground or into ditch, this creates a mess, it will begin to stink and become a health hazard for the general public.

It is the intent of Benton Utilities employees working in cooperation with City of Benton Code Enforcement and Police Dept. to uphold these ordinances and nothing further. We are sorry for any inconvenience this may have caused you, your family, or a local food truck. Our employees are just trying to keep those in violation in compliance, and when they refuse to cooperate, it has consequences.

If you have any questions, please feel free to message Benton Utilities.

We know that the Notice of Violation gave them 48 hours to comply, but at some point while BU representatives were on the scene on Friday, December 30th, the situation escalated. Nathan Schultz of BU then issued a 2nd Notice of Violation, this time shutting down the business immediately. This notice below reads, “Notice to close business for violation of dumping on the ground in the city of Benton. Have been warned over 4 times and illegally dumped at two different places in the City of Benton.” And it’s issued by just Nathan Schultz this time. 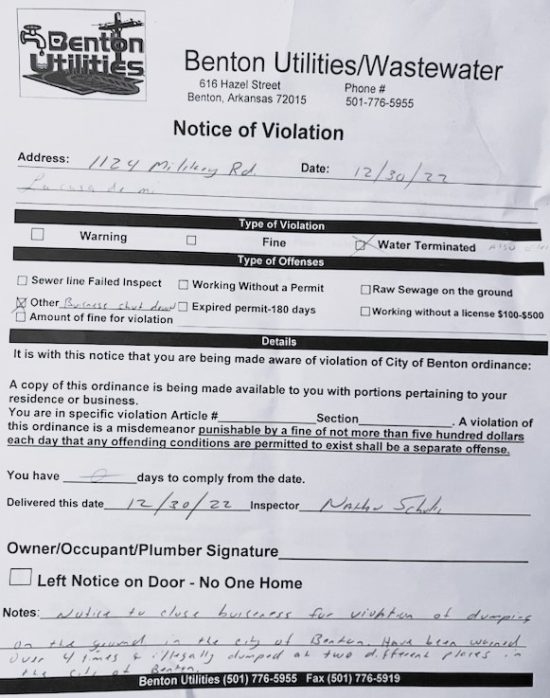 Up until now, this article has focused on their location on the day of this altercation. But this 2nd notice says they were previously at another location and have been warned by BU 2 other times (total of 4) prior to December 30th. We spoke to the owners at their previous location at The Main Street Station at 303 N Main St in Downtown Benton and here’s what they had to say.

“Adding Mexican cuisine to the food truck court has been a long-term goal and The Station has been honored to host chef, Geovanny Villagran of Mawmaw’s House. Unfortunately, despite multiple requests to dispose of gray water off-site to remain in compliance with state laws, they were unable to effectively address the issue and were asked to leave. We had hoped to find another solution, but have not been able to do so at this time. Currently, we are working with the city to find the best solution for this type of situation moving forward.” – The Main Street Station

The above statement, along with BU’s notice would seem to say the food truck was dumping their gray water illegally. The pictures of water on the ground (above) may or may not be gray water. BU says it is. Mawmaw’s says the soapy water in the picture is from an employee cleaning the parking lot.

I didn’t know what to think at this point, so I called the owners of the food truck. I originally reached out to them in the comments of their video (below), but their reply didn’t address my question about specific detail on what was racist. It also didn’t answer whether they did or didn’t dump their gray water illegally. 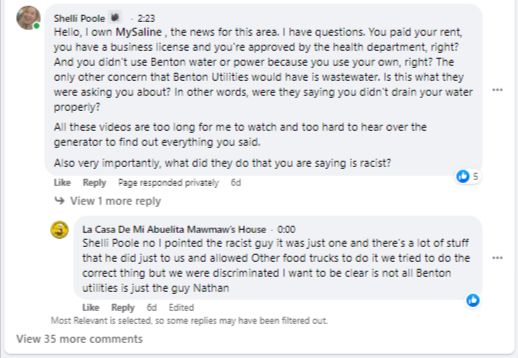 So now, the last piece of this puzzle is an interview with Mrs. Villagran. She contacted me to set the record straight. I got her permission to record the call. We went back and forth through text and voicemail before she returned my call, so it’s not a formal interview. Just a casual conversation. (And you’ll hear my slow, awful southern accent.)

There are relevant visuals on the video while we talked. She addressed every question and we talked for quite a while until I felt she had answered everything that she was going to answer. I could have edited this video down a lot shorter, but I wanted there to be no doubt what she had to say and what my questions were. Here is the raw video of our conversation so you can watch it and decide for yourself:

Here are the Winter Weather Closings for THU FEB 2ND