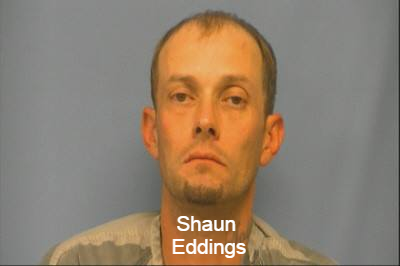 Saline County Sheriff’s Office Deputies responded to a call on Salem Road, Friday, October 26th, for a report of a male that was breaking into cars parked at residences. When they arrived in the area, they located the suspect, Shaun Eddings, age 39, in a stolen pickup truck behind one of the residences.

When confronted, Eddings ran on foot into a nearby wooded area, but was quickly caught and arrested. Criminal Investigation Division detectives responded to the scene and discovered that the pickup truck Eddings had been driving was stolen just previously from a Lake Norrell area resident.

Eddings was booked into the Saline County Jail on charges of Breaking or Entering, Theft of Property, Theft by Receiving, Residential Burglary and Fleeing.

According to SCSO’s social media, Saline County Sheriff Rodney Wright reminds residents to ensure that their vehicles are locked and to remove all valuables, including ignition keys, before leaving vehicles unattended.