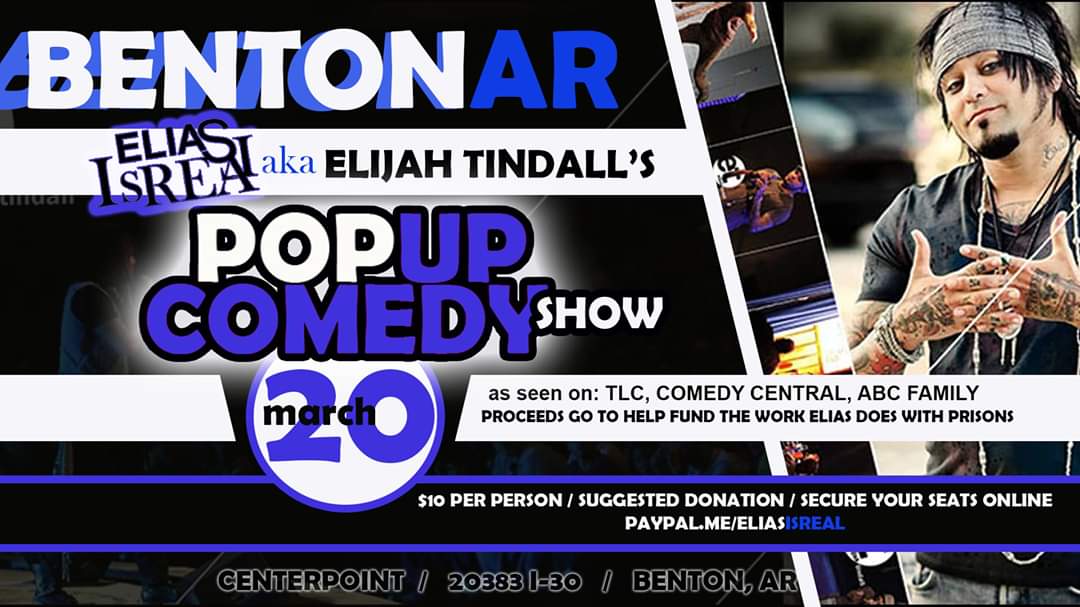 Elias Israel – better known to Saline County as Elijah Tindall – is bringing his standup comedy to Benton. It’s a homecoming for him, since he grew up in the area. This is a family friendly, all-ages show at Centerpoint Church.

The show is Friday, March 20th at 7 p.m. Admission is a suggested donation of $10 and you can send money for that via https://paypal.me/eliasisreal. The church is located at 20383 I-30, off exit 121, it’s the driveway right before Riggs Outdoor. This show benefits his work with inmates and prisons across the nation.

Elias is an International Comedic Speaker, Best Selling Author and describes himself as an all around happy guy. He was formerly a radio DJ in Little Rock but was also in ministry roles for 14 years before going into comedy.

“Nothing like working with restless 14-year-olds for 15 years to prepare you for drunk hecklers in the clubs,” said Elias.

His high energy, family friendly approach to comedy has been a vital tool in gathering a fan base of multiple age groups and cultures. You may have seen him on TLC, TBN, ABC Family, Comedy Central’s Rock Retro Weekend or a number of other media outlets. From Clubs to Churches to Prisons and everywhere in-between, Elijah’s goal is to spread hope, love, laughter and healing to all he encounters.

According to Elias’ social media, no one will be turned away over inability to pay so if you want to give extra, you can help to sponsor others.