The Benton Police Department became the first law enforcement agency in the U.S. to receive training from safeTALK. BNPD officers, staff, and dispatchers with the Communications Department, received the training to best recognize individuals who maybe suicidal and how to best react.

“This training helps us build bridges with people in need,” Chief Kirk Lane said. “In 2016, the BNPD responded to approximately 150 calls involving a suicidal person. Having these tools and understanding of how they can help identify and de-escalate situations to save lives is invaluable.”

The training was presented at the Benton Municipal Complex by Tyler West with the American Foundation for Suicide Prevention and Co-trainer and mental health professional Amy Muse. 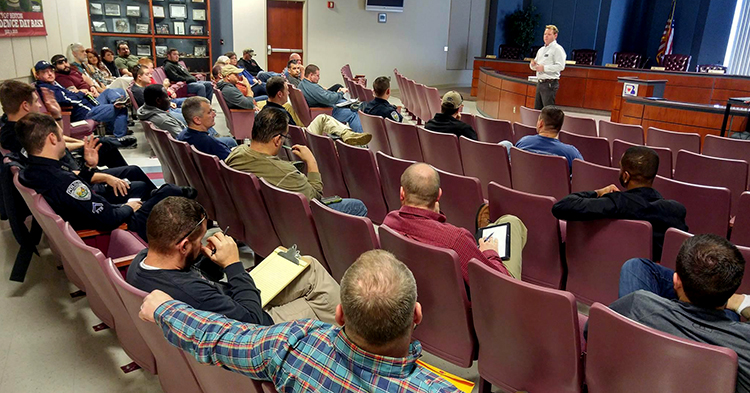 The training was presented at the Benton Municipal Complex by Tyler West with the American Foundation for Suicide Prevention and Co-trainer and mental health professional Amy Muse.

“Today we  realize that suicide is a public health crisis, and first responders get calls about this problem on almost a daily basis,” West said. “The Benton Police Department is fortunate to have great leadership that are forward thinking and looking to be proactive, in not just suicide prevention and mental health, but in all areas of finding ways to better serve your community.”

“Some people, when they are actively suicidal, are very vocal about it, but the vast majority of people are not. We are working with law enforcement officials to help first responders recognize those individuals who don’t say they are thinking about taking their own life, but you can see those subtle hints. We want them to know how to ask the right questions to get them to open up more, and then how to de-escalate that situation, and remind them that there are reasons to live.”

West said the safeTALK training the officers, staff and dispatchers received was not only about how to recognize and respond to a suicidal person. He said they are given information about “Keepsafe connections” which is an individual or organization with resources and extensive training in the subject of suicide and/or mental health.

“We want them to know how to ask an individual if they are suicidal, then how to de-escalate that situation and then how to pass them off to a keepsafe connection,” West said.

Muse, a mental health professional with Resilience Counseling in Little Rock, said education is the key not only for first responders, but also for professionals in her own field.

“I’ve been focusing on suicide prevention and educating the community, as well as my field, because that is something that is lacking in even the mental health training,” she said. “So we are trying to change things, trying to educate, because we’ve seen a lot of positive changes that can happen when people are informed about the information. Education helps to better equip everyone, and if we can equip more people in this society then we are going to reduce suicide.”

Muse said dispatchers are essential to the safeTALK training, because often they are “the first call.”

“Dispatchers talk to a wide variety of people who have a wide variety of problems, and a lot of those problems could lead to suicide,” she said. “If they can identify that right off the bat, then they can really help these people, to connect them with the right people and right resources, so their problems can best be addressed and change their behaviors and their futures.”

Since its development in 2006, safeTALK has been used in over 20 countries around the world, and more than 200 selectable video vignettes have been produced to tailor the program’s audio-visual component for diverse audiences. For more information, visit: www.livingworks.net or call Tyler West at Arkansas Suicide Prevention Council at 1-800-380-6992 or email [email protected].

If you or someone you know is at risk for suicide, please call the National Suicide Prevention Lifeline at 1-800-273-TALK (8255) or contact the Crisis Text Line by texting HELLO to 741-741. To contact the Benton Police Department, call 501-778-1171 or 501-315-TIPS or via the official Benton Police Department app found on iTunes and Google Play. Individuals also may send anonymous texts to CRIMES (274637) with the keyword BNPD in the body of the text.