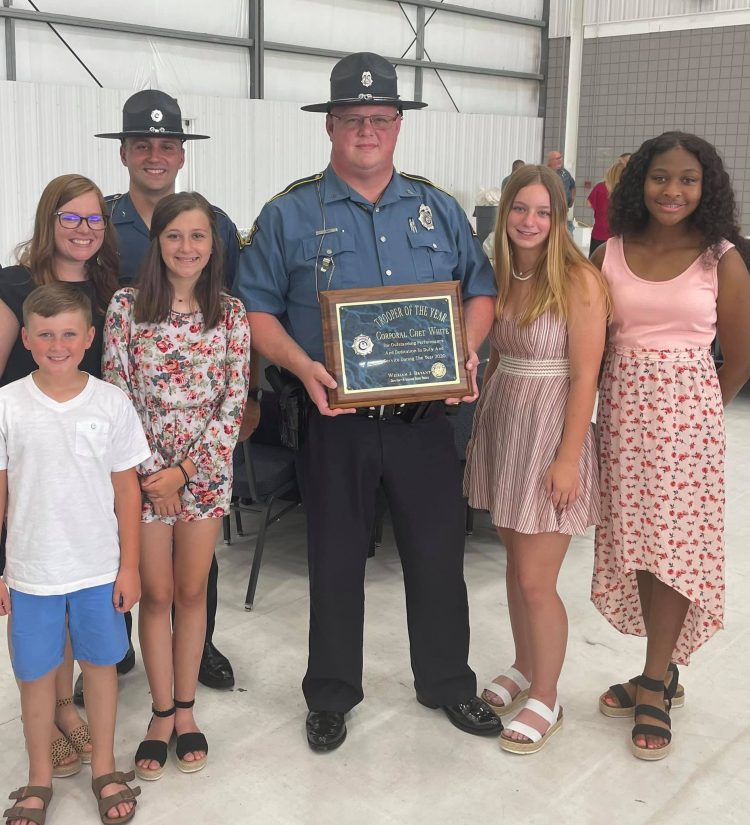 Corporal Chet White, 44, of Saline County (pictured above), was presented the prestigious Arkansas State Trooper of the Year Award for 2020 Tuesday during the annual state police awards ceremony.

White is a 22-year veteran of the state police assigned to Highway Patrol Division, Troop A and was among 11 state troopers who received various awards today. Additionally, 27 other troopers and civilians were recognized for their service as recipients of Official Commendations. Each award was based on documented facts as prescribed by Arkansas State Police policy. The awards were presented based on acts of service during calendar year 2020 or as criminal investigations of incidents were formally closed. The awards were presented by Colonel Bill Bryant, Director of the Arkansas State Police and Leslie Rutledge, Arkansas Attorney General.

White was off duty on July 18, 2020, but responded to call for help with a utility vehicle accident in Saline County. At the scene of the accident he found an unconscious 12-year girl pinned beneath an overturned off-road utility vehicle. The victim was not breathing, leading White to lift the 1,800 pound vehicle enough that two children who had been with the victim were able to pull her from underneath the UTV.

The victim survived her injuries following 10 days of hospital treatment and care. The photo below is from July 31, 2020. 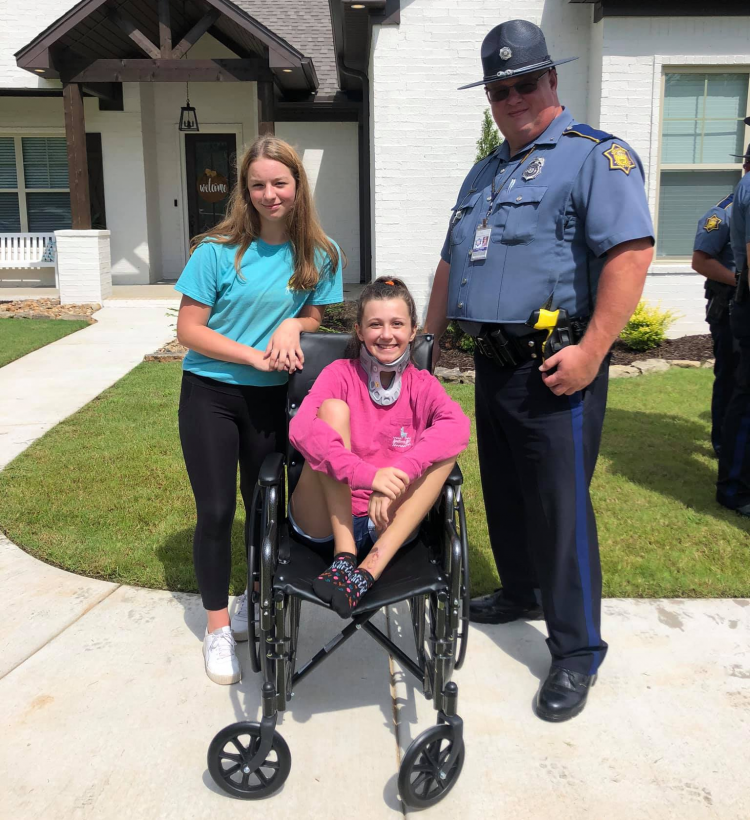 Other award recipients recognized today were:

Medal of Valor – Presented to a commissioned or civilian employee of the Arkansas State Police for extraordinary acts of valor and gallantry that clearly set the individual apart from other employees.

Trooper James Ray, 24, of Franklin County, a three-year veteran of the department, was awarded the Medal of Valor for his enforcement actions on December 4, 2020. He is assigned to the Highway Patrol Division, Troop H, headquartered at Fort Smith.

As Trooper Ray approached a vehicle parked alongside Interstate 40 near Ozark, the driver accelerated the vehicle onto the interstate and sped away.

With Trooper Ray in pursuit, the suspect refused to stop, fleeing at speeds often exceeding 100 miles per hour, moving onto the right shoulder of the highway passing other motorists and driving erratically.

As the opportunity approached to end the pursuit, Trooper Ray performed a Precision Immobilization Technique (PIT) on the fleeing suspect vehicle which was forced into a clockwise rotation into the westbound lanes. The suspect driver was able to regain control of his vehicle and began driving eastbound in the westbound lanes, posing an extreme danger to other motorists who were now meeting the fleeing suspect head-on.

The suspect traveled a short distance before he crossed the median and began traveling westbound in the eastbound lanes.

Trooper Ray, realizing he was running out of options to stop an extremely dangerous driver, then drove west in the westbound lanes attempting to get ahead of the fleeing driver.

The heroic actions by Trooper Ray while pursuing a fleeing driver prevented a catastrophic collision between the suspect and innocent motorists traveling along Interstate 40.

Corporal Steven Maness, 46, of Pope County and Trooper First Class Destin Linkous, 29, of Conway County, were awarded the Medal of Valor for their heroic actions on January 21, 2020.

The two troopers were the first law enforcement officers to encounter an armed suspect who had fled into a wooded area in Pope County near Atkins. The suspect had earlier directed gunfire at Atkins Police Chief Stephen Pack.

Both Corporal Maness and TFC Linkous were immediately the targets of gunfire from the suspect as they approached a shed where they initially believed the suspect might be hiding.

Despite often being at a tactical disadvantage because of their location in proximity to the suspect, Maness and Linkous, along with other law enforcement personnel endured nearly an hour-long running gun battle with the suspect, who had hidden himself in dense woods and underbrush.

At one point as the exchange in gunfire subsided, Corporal Maness established a dialogue with the suspect, hoping the gunman would surrender. Instead, the suspect used Corporal Maness’ voice to hone in on the trooper’s cover and moved to within 40 yards of Maness before other law enforcement officers distracted the suspect, leading him to move in another direction.

The suspect later died from injuries sustained in the gun battle.

Corporal Maness and TFC Linkous are credited with extraordinary bravery by placing themselves in harm’s way and preventing the suspect from gaining a path into a nearby residential neighborhood.

Lifesaving – Presented to a trooper or civilian employee who through direct personal intervention, sustains another person’s life.

Trooper Brady Nuckels, 25, of Van Buren County, was presented a lifesaving award for saving the life of a man who had overdosed by ingesting multiple Oxycontin tablets before entering a Bee Branch (Van Buren County) variety store.

On the afternoon of April 13, 2020, as Trooper Nuckels was preparing to end his duty shift, he monitored the local sheriff’s department dispatch a deputy to the store where the victim of the overdoes was laying on the parking lot.

Trooper Nuckels was considerably closer to the store than the deputy and began moving toward Bee Branch. Upon driving onto the parking lot, he located the victim, who was gasping and in obvious distress. After assessing the symptoms, Trooper Nuckels returned to his patrol car to obtained Narcan, a prescription medicine used for the treatment of opioid overdose.

Within seconds the victim began to regain consciousness and was transported by ambulance to receive medical treatment.

Trooper Nuckels’ readiness to respond to the call and his quick assessment of the symptoms exhibited by the victim have been credited with saving the victim’s life.

Trooper Donnie Cheers, 39, and Trooper Mason Marrone, 30, both of Crittenden County were presented lifesaving awards for saving the life of a truck driver involved in a motor vehicle crash along Interstate 55 on October 1, 2020, near West Memphis.

Upon their arrival at the crash scene the troopers found the driver trapped inside the cab of the truck which was burning and flames about to engulf entire cab.

West Memphis Fire Department personnel were able to extinguish the fire long enough to allow paramedics to enter the wreckage and extract the driver.

Paramedics who transported the injured driver to a Memphis hospital later said had it not been for the heroic fight the troopers demonstrated, the driver would have certainly perished inside the truck.

Trooper’s Cross – Presented to a trooper or civilian employee who demonstrates extraordinary courage.

Corporal Andrew Ault, 34, of Garland County and Corporal Eric Wold, 40, of Sebastian County were awarded the Trooper’s Cross for their roles in a 12 hour long stand-off at a St. Francis County residence where an armed man wanted on a felony charge of terroristic threatening had vowed to kill anyone who attempted to arrest him.

On May 18, 2020, the St. Francis County Sheriff’s Department relinquished command in the stand-off to the Arkansas State Police SWAT team. Team members took-up positions and within 90 minutes fired on by the wanted suspect.

As the SWAT team began preparing to deploy a chemical irritant into the house, the suspect was repeatedly asked to exit the residence through the garage, unarmed, and with his hands raised above his head.

The suspect moved to the rear of the residence and exited through a back door and still believe to be armed. As the suspect began to make a move as to raise a gun he was shot by Corporal Ault.

Sergeant Marcus Daniels, 39, of Pulaski County, was awarded the Trooper’s Cross for his actions on June 27, 2020 as he attempted to apprehend a man who had stabbed an Arkansas Highway Police Officer. The incident occurred in Little Rock at the intersection of Interstate 30 and Roosevelt Road.

As Sergeant Daniels moved toward the armed suspect, he fired his less than lethal TASER which had no effect on the suspect, who then began to advance on Sergeant Daniels who then transitioned and prepared to use deadly force with his handgun.

Sergeant Daniels then began to render aid to the wounded highway police officer.

Both wounded men were transported from the scene by ambulance. The highway police officer was later released from the hospital. The armed suspect was pronounced dead at the hospital.

It was later determined that the suspect had earlier committed an armed carjacking of a taxi driver and was also a suspect in a homicide that occurred the day before.

Trooper James O. Ray, 24, of Franklin County, was recognized as National Trooper of the Year for his selfless act of bravery that saved the lives of motorists traveling through western Arkansas along Interstate 40 last year. (See Medal of Valor narrative above)

The elder Dukes died December 28, 1954 from injuries sustained when he was struck by a vehicle while directing traffic and assisting a state trooper investigating an earlier vehicle crash in Newport near the intersection of U.S. Highway 67 and Arkansas Highway 18.

Charles Allison Dukes was a 12-year veteran of the Arkansas State Police, employed as a telecommunications operator, assigned to the Highway Patrol Division, Troop B. His son, Charles Ed, had never been told the circumstances of his father’s death until recently.

The facts involving the death were discovered during a research project undertaken by Jason Tubbs, the current chief telecommunications operator at Newport, Troop B.

Official Commendations – Presented for acts of exemplary service and awarded during meetings of the Arkansas State Police Commission prior to today’s awards program.

Distinguished Service Award – Presented to local citizens at large or law enforcement officers of another agency who have rendered aid to Arkansas State Troopers.

Joseph C. Davenport, Arkansas State Park Ranger, of Roland, Charles Madden, of Roland, Jacob Burgess, of Little Rock and James Holmquist, of Roland were awarded the department’s Distinguished Service Award for their March 17, 2020 service while attempting to save the life of a motor vehicle crash victim.

The victim of the crash had lost control of her vehicle along Arkansas Highway 300 and went off the roadway into the Maumelle River. All four men entered the near freezing temperature water to rescue the driver.

As state troopers arrived on the scene the four had recovered the unconscious woman and had begun cardiopulmonary resuscitation attempting to revive the driver and continued the procedure until an ambulance arrived.

The victim died later at a Little Rock hospital.

According to state troopers, the four men braved the freezing conditions and swift moving water, placing themselves in grave danger attempting to save another person’s life.

Harry Rhoades, of Bluffton (Yell County) and Noel Vincent, of Parks (Scott County), were awarded the department’s Distinguished Service Award for their heroic efforts on July 31, 2020 when they discovered a single vehicle motor vehicle crash along Arkansas Highway 28 south of Waldron.

Upon the arrival of a state trooper at the crash scene, the driver of the vehicle involved in the crash was laying in the roadway.

The trooper soon learned the two men had stopped when they saw fire about to engulf the wrecked truck and its driver trapped inside.

In a statement to the investigating trooper, he stated, “…the fire was creeping into the cab and I could feel the heat from the fire… the gentlemen came to my rescue and pulled me from the burning wreck.”

Both Rhoades and Vincent have been credited with saving the victim’s life.