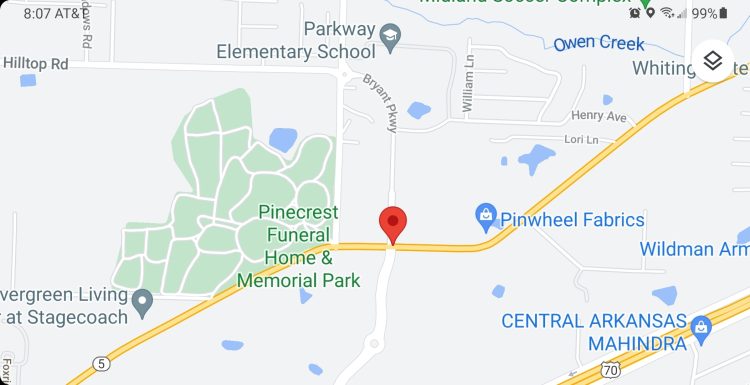 Scroll down to read articles related to this project, dating back to 2017.

City of Bryant officials have known for years that the intersection at Bryant Parkway and Arkansas Highway 5 North needs more to protect drivers turning onto or crossing the highway there. But the City’s hands were tied because it is a state highway. The problem only got worse, with more traffic when the new Parkway Elementary School opened in 2018 just north of the intersection.

The Arkansas Department of Transportation (ARDOT) is the authority for any decisions on changes to state highways.  They weren’t intentionally being uncooperative, but they also aren’t finished working on a major widening project for Hwy 5. It isn’t in their plan to place a permanent traffic signal there until the widening job is finished.

Mayor Allen Scott and City staff kept working with ARDOT and finally came up with the solution for the City to foot the bill to install a temporary traffic signal at the intersection.

“Currently, Highway 5 is being re-designed, and plans are in place to expand the state highway from Benton to the Pulaski County Line,” Mayor Scott said in a statement. “Preliminary designs show that this intersection is scheduled to receive a traffic light. However, it will be several years before the design and construction will begin. Approving the temporary light will give a solution much sooner to the traffic safety concerns at this intersection, while allowing the engineering and design work to be completed on the expansion project itself, adhering to ARDOT’s timeline.”

According to the statement,  the Bryant City Council will vote to approve the $90,000.00 needed for the city to install the traffic signal during their meeting Tuesday, October 26th. There are eight councilpersons, so five yes votes are needed for it to pass.

If the vote is successful, the City will engage a contractor and get the project going. Watch for an update on project progress and expected timelines.

Bryant to Hear Public Opinion May 22 on Hilltop/Parkway Intersection MAY 20, 2019

City of Bryant to open roundabout by elementary school on Friday AUG 10, 2021