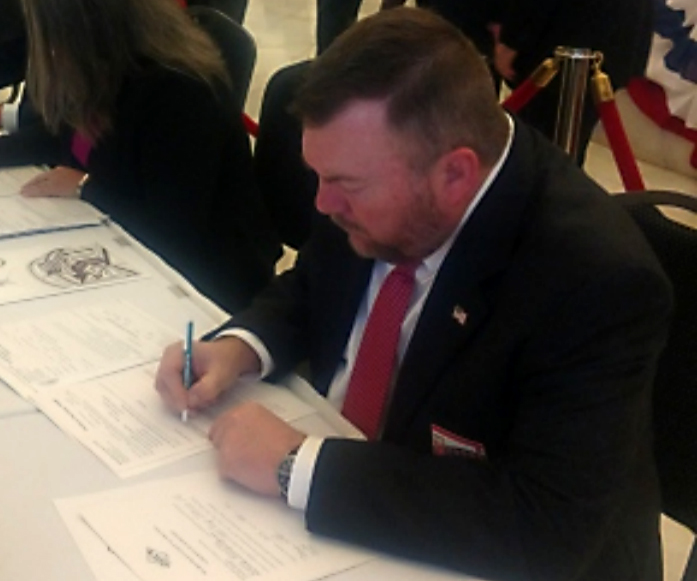 “It is with a humble heart and a commitment to serving Saline County that I officially announce my candidacy for State Representative of District 28 in the Arkansas House. Service is an important part of my life – from having the honor of serving our country in the United States Marine Corps, to serving my community as a Councilman for 8 years, and to organizing the Saline County Gun and Knife Show.

“I will fight to lower our taxes to be competitive with surrounding states to attract new jobs. Job growth for District 28 is a top priority of mine, from helping local companies to bringing in new ones. I know together we can make our District and state even better.

“For example: Arkansas has 119 state government employees per 10K citizens, while Tennessee and Texas only have 65 per 10K citizens. I will work relentlessly to reduce government waste and improve efficiency. It has been a privilege to help keep Benton moving forward and I am ready to work hard for you to make District 28 and Saline County an even better place to live. I am a conservative Republican who will always stand for the national anthem and salute the US flag, while also protecting our Second Amendment rights. My door will always be open to listen to your ideas and concerns, and I can be reached at (501)-580-3737. I am humbly asking for your vote in the May 22nd Republican Primary.”

Kerry Murphy, a US Marine Corps Sgt. combat veteran and small business owner who organizes the Saline County Gun and Knife Show, is running as a Republican candidate for Arkansas State Representative of District 28. He is currently serving his 8th year on the Benton City Council. He has served on multiple committees and the A P Commission. Murphy was named 2017 Entrepreneur of the Year by the Saline Courier, as 1st Vice Chair of the Saline County Republican Party and serves on the Heritage Farm POA Board. Murphy is a member of the VFW, American Legion, and the Benton Chamber of Commerce. He has worked on the campaigns of Lt. Gov. Tim Griffin and other strong conservative leaders over the last 8 years. He grew up in Saline County with his sister, Carla McDorman, brother, Kerwin Murphy, and parents, Charles and Mary Murphy, who live in Bryant. He and his wife, Audra, have been married for 24 years and have one daughter, Madison, who attends Arkansas State University.