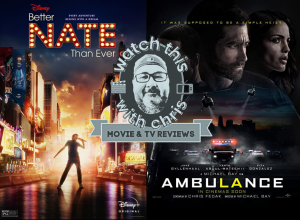 Here’s another one I’ve been waiting on for several months. I’ve been a Jake Gyllenhaal fan since “Donnie Darko,” and who doesn’t love a good Michael Bay action flick?! This one was supposed to be released back in February and I was ready to go, but then the studio delayed it til April.

So, “Ambulance” is a pretty simple storyline. Two robbers steal an ambulance after their bank heist goes very, very wrong. Jake Gyllenhaal (Donnie Darko, Brokeback Mountain) and Yahya Abdul-Mateen II (Aquaman, The Get Down) play brothers Danny and Will. Gyllenhaal’s character, Danny, is a career bank-bobber. Abdul Mateen’s character, Will, is a Marine who is just looking for a way to make some money to pay for his wife’s experimental surgery. He reluctantly agrees to do one job with his brother, and, as you can imagine, that one simple “in and out” job turns out to be not-so-simple.

This is a classic, really fun Michael Bay (The Rock, Transformers, Armageddon, Pain & Gain, Pearl Harbor, etc.) movie. The man knows how to do action, and how to do it well! It’s a pretty simple concept for an action movie, but the writers throw in a fair share of twists and turns. The action sequences are done really well. The chemistry between the cast is great. Lots of tension that just builds and builds and then builds some more.

Elsa Gonzalez Reyna (Baby Driver, Hobbs & Shaw) plays a heroic EMT who ends up along for the ride in the ambulance and she’s trying to save a life in the ambulance during a 60+ mile per hour police chase. This young actress & singer’s performance really stands out in this movie. I’d say she has a bright future ahead of her.

The movie is a little long for your run of the mill action movie coming in at just over two hours and fifteen minutes, but you will not get bored, and the time goes by pretty quick. This is a great, really fun return to form for Michael Bay and I highly recommend it to all my action movie buffs out there.

“Ambulance” is rated R for intense violence, bloody images, and language throughout. I’m giving this one a solid 4.7/5.

Better Nate Than Ever (streaming on Disney+)

This movie is a long-time coming. Now I absolutely love a good feel-good sports movie. They are some of my all-time favorites. Movies like “Remember the Titans,” “Rudy,” “Rocky,” “Hoosiers,” “Friday Night Lights,” “Field of Dreams,” “The Bad News Bears,” and the list goes on and on. We’re always rooting for the underdog. We love it when they beat the odds. Right?!

However, in the last couple years, I have gotten involved in some community theater here at Benton’s historic Royal Theater. This guy who always HATED musicals has now done two musicals in the last few years. That’s right! I was up on that stage singing and dancing…well, trying to dance. Yeah, it was bad. Anyway, I’ve gained this whole new love and respect for the world of theater. And I’ve made some incredible new friends as well. The kids at the Royal are really the ones who have touched my heart. Some of these kids also do sports, but some don’t. Some really didn’t think they “fit in” anywhere until they found theater. The theater is a place where you should be able to be exactly who you are. You can let your true self shine. And that’s what this movie is about.

13-year-old Nate Foster fantasizes about becoming a big Broadway staff. He and his best friend, Libby, mastermind a trip to NYC to audition for “Lilo and Stitch: The Musical,” and the shenanigans begin. These kids do an excellent job in this movie. Rueby Wood (Charlie and the Chocolate Factory- Broadway tour) stars as Nate. This kid is going to be a star! He can act. He can sing. He can dance. WoW! Aria Brooks (Black Widow, Harriet) stars as Nate’s best friend, Libby. She’s really good too.

Nate’s parents in the movie are played by Norbert Leo Butz and Michelle Federer, were both part of the original Broadway cast of Wicked, which is referenced several times throughout the movie. There’s also a BIG STAR in the movie that I had no idea was going to show up. I was super excited about this, and she was great as always. Should I tell you who it is or just let you be surprised like me? I’m leaning towards just letting you figure it out, but how do I know you won’t Google it. Dang you, Google! Wait. I didn’t mean that. I love Google. Okay I’ll tell you. It’s the great Lisa Kudrow (Friends, Romy & Michelle’s High School Reunion!) That’s right, friends. Phoebe Buffay is in this movie (but she’s obviously not Phoebe in this movie.) How cool would that be though. Hahaha

WoW. That got a little off-track, huh?! Anyway, this is a really great movie about following your dreams. Now, kids…should you disobey your parents and run off to NYC to audition for a Broadway show with your best friend when you’re just 13? Probably not! I’m waiting for the critics to start slamming Disney because this movie promotes rebellion. BTW- I just rolled my eyes so hard, they really did almost get stuck that way. Yikes! Maybe our parents weren’t lying to us about that.

Anyway, I highly recommend this movie. If you have a child coming up who’s trying to figure out where they fit in the world…pop some popcorn and kick back on the couch and watch this with them. Then take them to a show at your local community theater! They might just find that place where they belong. Or maybe you’re in your 40s like me and you just say, “What the heck” and stumble into the theater when your friend says, “Hey. You should do this show.” Yeah, that’s KINDA what happened to me with “Miracle on 34th Street: The Musical” a few years back. It’s a whole funny story.

“Better Nate Than Ever” is rated PG for thematic elements (whatever that means), a suggestive reference and mild language. Honestly though, I don’t remember any of that. I’m giving this one a solid 4.8/5. I loved this movie!!!!