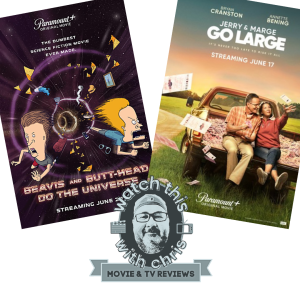 Chances are you haven’t heard of this one but go ahead and sign up for Paramount+! It’s a winner. The main reason this movie was on my radar is because I’m a BIG Rainn Wilson fan, and I follow him on social media. Who asked, “Who’s Rainn Wilson!” Seriously? Rainn Wilson (The Office, The Meg) is the one and only Dwight Schute from one of the greatest TV shows of all time- “The Office!”

Anyway, back to the movie. “Jerry and Marge Go Large” is the true story of Jerry and Mage Selbee, small town “regular folk” who win the lottery and use the money to revive their town. The role of Jerry is played by Bryan Cranston (Breaking Bad, The Upside). Jerry is a retired factory worker who just happens to also be a math whiz. He’s an “everyman” who is not real happy about retirement and lives a very regular, boring life without taking any chances. However, one day he discovers a flaw in a local lottery game and decides to take a risk. His wife, Marge, is played by the great Annette Bening (American Beauty, The Grifters). She’s a housewife who’s a little more willing to take a risk and is just craving some excitement in her life. Rainn Wilson plays a liquor store clerk who befriends the couple. You’ll also see the always funny, Michael McKean (Saturday Night Live, Best in Show).

I think the thing that’s so endearing about this show is that the characters are so relatable. They’re just real people. They live in a small-town. Their lives get a little “stale” or “stagnant” as they age. They go to work, come home, play cards with their friends, try to save what little money they make, and then they go back to work. Admittedly, I’m a big fan of Cranston, and Bening, of course, is a legend. This may be my favorite role of Bening’s though. With Cranston, I don’t even know how you pick a favorite role of his. Walter White has got to be up there at the top though! Right?

The tagline to this movie is “It’s never too late to risk it all.” Maybe some of us should live by that. We work and we save (well, I’m not very good at saving, but you know what I’m saying.) We work our whole lives and then what? We retire when we’re too old to really enjoy what we’ve worked our whole lives to amass. Irresponsible or not, I want to have some fun now. I want to travel now while I’m physically able. I want to go to concerts and to theme parks and on road trips while I have a good job that provides good benefits and REALLY good PTO accrual. I can promise you I’ll not be the guy that builds up so much PTO that I can’t accrue anymore. If I have it, I’m using it!

Now I don’t really play the lottery, but maybe I should. Maybe I should spend $20 every week on the Powerball. The odds of winning are astronomical, but someone has to win eventually. Right? Why not me?!

Anyway, this one is a winner in my opinion. It’s not a big money blockbuster, but it’s a really good, feel-good movie. It’s funny and it’s heart-warming. “Jerry and Marge Go Large” is rated PG-13 for some language and suggestive references. I’m giving this one a solid 4.4/5.

Beavis and Butthead Do the Universe (streaming on Paramount+)

(in the voice of Butthead) This is the greatest thing I have ever seen.

I’m definitely showing my true level of maturity here. I have been waiting for this movie since “Beavis and Butthead Do America” debuted in 1996. For that movie, we lined up to get the first tickets to the first showing on the first day. Shout out to my old HSU crew- Andy Goodson, Jason Davis, Steve Eckman, Brody Gills, and, I think, Kendal Harkey. My apologies if I left out anyone.

Anyway, after a “creative” judge sentences the boys to Space Camp for 8 weeks, an accidental mishap with a black hole sends Beavis and Butthead 24 years into the modern future where they misuse ipones, embark on the obvious quest to score, and become targets of the Deep State. Beavis and Butthead learn about White Privilege. They learn about love. They time-travel. They go to college, and then jail. And no Beavis and Butthead experience would be complete without a visit from The Great Cornholio! It’s quite the journey for our heroes.

Now you know the plot. The next question that you’re dying to ask is, “Did you like it, Chris?” The answer is a resounding YES! Was it as iconic as the first movie? Absolutely not! Was it a funny and irreverent next chapter for our favorite misfits? Yes, it is! If you’re like me and you grew up watching Beavis and Butthead, you need to watch it. If you’re younger than me, but you love irreverent and somewhat inappropriate humor, you need to watch it.

“Beavis and Butthead Do the Universe” is rated TV-14 for suggestive dialogue, adult language, and some violence. It’s the dumbest science fiction movie ever made…and I mean that in a good way! I’ll give this one a 4.0/5.