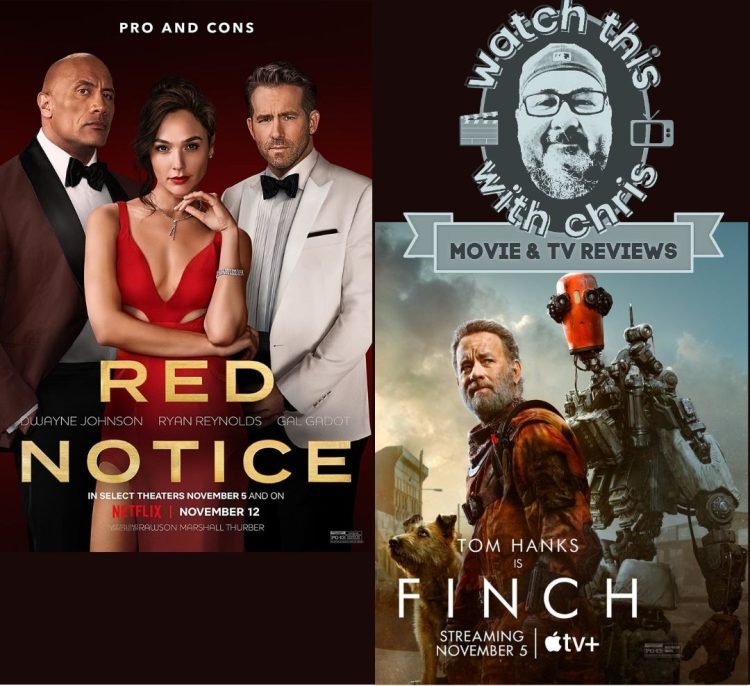 Friends, “Finch” is what a movie should be. Take a moment and think about how many times the great Tom Hanks has really disappointed you? Personally, I can’t think of very many. I wasn’t a big fan of “Cloud Atlas,” but I don’t typically care for sci-fi. Interestingly enough, Hanks ranks that one as one of his 5 favorite movies that he’s ever made. I can really only think of two movies of his that I would really consider to be “disappointments” though. The first would be 1990’s “The Bonfire of the Vanities” and the second is another one from that same year- “Joe Versus the Volcano.” Since then, it’s been a steady stream of really great films like “Forrest Gump,” “Philadelphia,” “A League of Their Own,” “That Thing You Do,” “Apollo 13,” “Saving Private Ryan,” “Catch Me If You Can,” and my personal favorite- 2004’s “The Terminal.”

In “Finch,” Hanks stars as the title character on a post-apocalyptic earth where a robot, that he built to protect the life of his beloved dog once he’s gone, learns about life, love, friendship and what it means to be “human.” It’s been quite some time since I’ve seen a movie with this much heart.

Something interesting about this movie is that it pretty much stars Tom Hanks, and only Tom Hanks. There are a couple of voice actors and, I believe, 3 actors who star in brief flashback scenes. Other than that, it’s Finch, his dog, and a couple of robots. What’s not to love? We all love Tom Hanks. We all love dogs. And we all love loveable robots. The robot, Jeff, reminds me quite a bit of Johnny Five (Short Circuit). This movie also brings back memories of one of Hanks’ earlier blockbusters, “Castaway” as well as the Will Smith classic, “I Am Legend.”

Honestly, I’m not real sure what else to say about this movie. If you don’t already subscribe to Apple TV, this is a great reason to sign up! You should absolutely watch this movie, and I can almost guarantee it will be one of your new favorites. Have a few tissues on-hand though. I’m just saying.

I don’t typically include links to trailers in my reviews, but this one is worth it. “Finch” is rated PG-14 for brief violent images. This one gets one of the highest ratings I’ve given a movie or show thus far- 4.8/5. It’s just almost perfect in my opinion.

I’m the first to admit to being a big fan of Dwayne “The Rock” Johnson! I have loved his movies going all the way back to “The Rundown.” And then there was his take on “Walking Tall”- loved it! “Gridiron Gang”- loved it! “Tooth Fairy”- loved it! “Faster”- loved it! “Central Intelligence”- loved it! “Moana”- loved it! Both “Jumanji” movies- loved them! “Rampage”- loved it! “Skyscraper”- loved it! “Jungle Cruise”- REALLY loved it! Now I can’t wait for “Black Adam” and his take on “Big Trouble in Little China.” He’s such a fun action star, but he’s also really funny. I love him and Kevin Hart together, and now he and Ryan Reynolds are just as funny.

In “Red Notice,” Johnson starts as John Hartley, an Interpol agent who is tracking the world’s most wanted art thief. His global pursuit finds him in the midst of a daring heist where he’s forced to partner with the world’s greatest art thief, Nolan Booth, played by Ryan Reynolds (Deadpool, Free Guy) to catch The Bishop, played by Gal Gadot (Wonder Woman, Justice League.)

This one is getting mixed reviews, but I love it! There’s a lot of action; ridiculous, over-the-top action…which is my favorite kind! There’s also heart, and there are a LOT of laughs. Ryan Reynolds’ usual comic timing is spot on here. In my opinion, this one has enough star power and it’s fun enough, I was surprised it was a Netflix original. I initially thought it was a theater release that was also streaming online.

It would have been easy, as great as Gadot is, for her to have gotten lost in the mix between Johnson and Reynolds. Now the movie certainly centers around their characters, but Gadot absolutely holds her own. Every time she comes onscreen, you’re glad she’s there. Now I’m not saying “you’re glad she’s there” just because she’s a…handsome gal (see what I did there?). I mean…she IS a handsome gal (I did it again), but what I mean is that she holds her own acting-wise. I know what you’re thinking. You’re thinking, “I bet he also tries to convince people he goes to Hooters because the wings are good.” But they are. Right?

Okay never mind. We’re getting off track here. You should DEFINITELY watch “Red Notice.” It’s rated PG-13 for violence and action, some sexual references, and adult language. Too much language for small children, but I’d let me 13-year-old boy watch it. He’d enjoy it I think (and not because of the handsome GAL.)