I saw a recipe video on Tik Tok and it looked really dang easy. I had all the ingredients in my refrigerator and the toaster too, of course. I am also not one to turn down a kweeza-deela.

You know what – side note: I know that “quesadilla” is pronounced kāsəˈdēyə, but that doesn’t erase the memory of that one time…

[flashback harp-strumming sound]
…that I went through a Tex-Mex drive through restaurant and I got the giggles while ordering a “fuh-jeeta kweeza-deela and a choco taco.” The lady in the window got tired of me giggling really fast and refused to serve me. She just stopped talking to me. I even drove around to the window and there was no one to be seen.

I was so tired and hungry, but the fact they thought I was too weird to serve… only made me laugh more. I was still laughing and in tears and about to pee myself, but I wasn’t going inside the restaurant and have them call the police – because I can only assume you’re criminally stupid and definitely not just road weary if you pronounce the food wrong on purpose. My then-husband wasn’t too sure about me at that point either, but he at least thought it was funny.

Now about this TikTok video recipe…

You just get a tortilla and throw some cheese in it, close it like a bathrobe and then fold it up the other direction. If that doesn’t make sense, well then that’s why I have pictures, of course.
Here we go:

Of course I have to add a disclaimer up front for the general populace, since there is a certain amount of danger associated with this recipe. I’m not saying don’t try this at home, but I am saying try it at your own risk. And I am saying keep a good eye on your toaster while you are using it for this purpose because some toasters are going to do it just right and others have the propensity for pyrotechnics. (That means they might catch on fire and explode.) Having said that, here’s all the stuff! Cheddar, mozzarella, I added smoked turkey, and definitely a big ol’ tortilla. (Hey if your aunt was a tortoise, would you call her Tor Tia?)

I threw some cheese on the tortilla. it’s all the same color in the pic but zoom in or something, I don’t know.

I threw some turkey on it.

I threw some different cheese on it.

Time to close the bathrobe.

And fold her up.

Cram that naughty girl in the toaster.

That last part sounded violent or creepy or something so gently press the toaster button until it clicks. Why am I telling you how to work a toaster? If you don’t know that by now, I probably can’t help you with much else. 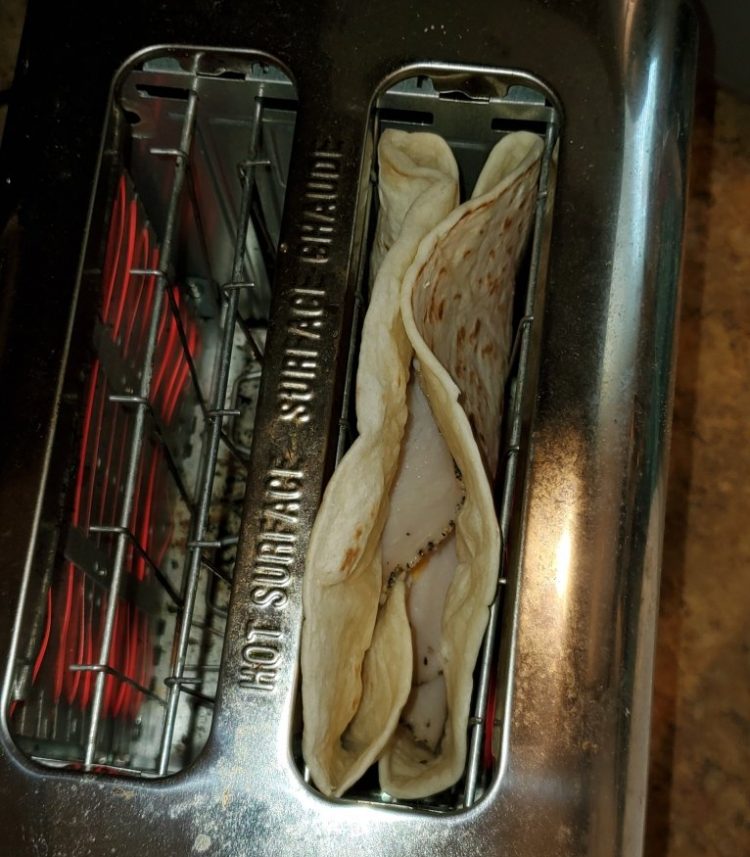 I set the 🤎brownness dial🤎 to “medium” because I was afraid of burning my tortoise aunt.

This second picture of the thing in the toaster is because one ride did not make a quesadilla. It made a warmish wrap.

Stepping off of the second ride through yonder toaster, I got some nice grill marks and gooey cheese. This right here is a quesadilla, friends. I even felt it was worthy of sharing with my homies in the group chat.

This last picture looks like something out of a medical journal, but I needed to show you that melty melty cheese.