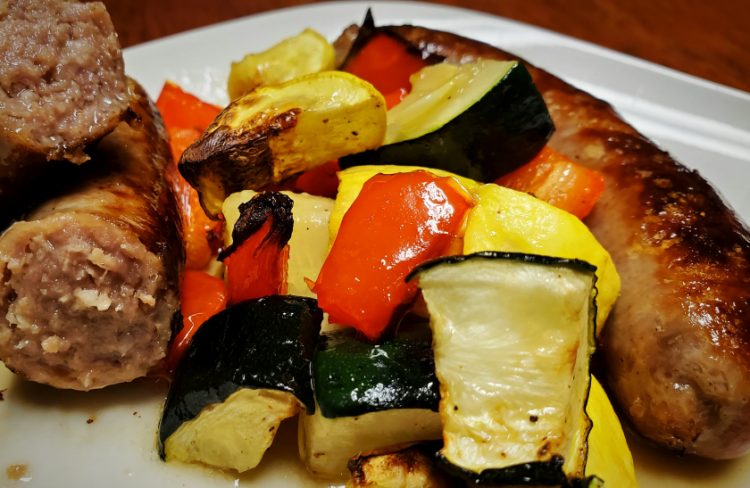 One of my favorite meals is brats with yellow squash, zucchini, red bell pepper and sometimes rice. I know you’re thinking I’m about to tell you some long story regaling a rustic, romantic dreamscape whereupon my husband forgoes his football game in his starry-eyed devotion to my womanly qualities due to this intoxicating recipe, but no. I am divorced and my children are grown so I whipped up this tasty bidness to eat all by myself. And for the first time, I cooked only some of it in the skillet as usual, and the rest relaxed in the culinary desert that is the air fryer.

I already told you all the ingredients in the first sentence, except that I did put a sploot of olive oil in the skillet and some chicken seasoning on the veggies.

🎵 a sploot in the skillet and a silver spoon, little boy blue and the Man in the Moon… 🎵

With the gas stove on high, I put all five brats in the skillet to sear them. This was about a minute each side. Then I turned the fire down to medium-low. (Why does the word “medium” go first in both the phrases “medium-low” and “medium-high?”)

I had preheated the air fryer to 360 degrees Fahrenheit and I took two of the seared brats from the skillet and put them in the air fryer. I left the three other brats cooking in the pan but I waited on veggies before closing the air fryer to begin cooking the brats.

I quickly chopped up the vegetables like a dang boss (because who else is going to be the boss – I already told you I’m the only one here), sprinkled some seasoning on them, and split them between the skillet and the air fryer. It was almost *sneezoning* because I did have to achoo but that went in the other direction.

The air fryer whooped the booties of those brats and veggies in 10 minutes flat. Meanwhile the skillet needed closer to 18 minutes to do its duty.

The difference between the two end results on the plate is going to depend on your taste preference. The air fryer was quicker and gave the veggies a smoky taste but they were also a little drier than I would have liked. While eating, I ended up dabbing them in the brat juice to compensate. Hmm… Dabbing in the brat juice – there’s a joke in there somewhere about the temperament of elementary school kids.

You will remember that I put a sploot of olive oil in the pan. Maybe next time I put veggies in the air fryer, I will der spritzen beforehand. I learned all my Swedish from a Muppet chef – don’t act like you need a translator!

In the end, I made a happy plate, eating all the food from the air fryer, and I will surely eat the rest of it from the skillet tomorrow.