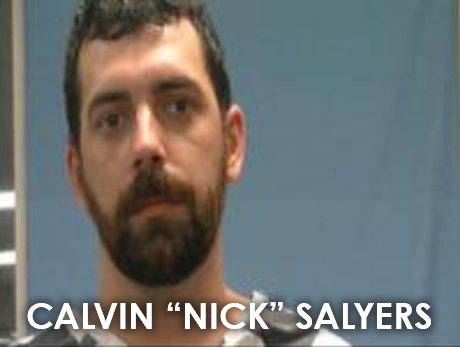 Calvin Nicholas “Nick” Salyers, 33, of Alexander, an officer of the Alexander Police Department, surrendered to Special Agents of the Arkansas State Police Criminal Investigation Division on Wednesday, July 8, 2020, and was formally served with an arrest warrant for Manslaughter (Class C felony).

Salyers was charged in connection with the June 3rd shooting death of Scott Hutton, also an Alexander police officer.  The incident occurred at 15400 block of Evergreen in Alexander. (Click to see previous article.)

According to an investigative report by Arkansas State Police, Hutton knocked on the front door of Salyers’ home and was shot through the door. Salyers initially stated on a call with 911 dispatch that the shooting was an accident. According to court documents, an investigation by State Police concluded that the weapon was pressed against the door near the peephole when it was discharged.

The report says that “the bullet traveled through the door, struck Officer Hutton in the upper right chest, traveled across his body, entered and exited the heart, then wedged under the skin on his left side.”

The report states that a Training Sergeant at the Alexander Police Department was interviewed and said that when the riots in Minneapolis began, Salyers told him if any protestors came to his residence, he would “shoot through the door.”

The report concluded that the evidence indicated that Salyers acted recklessly, which resulted in a firearm being discharged, causing Hutton’s death. Upon completion of the investigation, the case file was submitted to the prosecuting attorney who made the decision to criminally charge Salyers.

Salyers has been with the Alexander Police Department since 2017.