UPDATE:  So You Want a Bowling Alley Again? Let’s Make This Happen.

There’s a rumor going around (and this is how trouble starts) that indicates the building formerly housing Enterprise Lanes bowling alley – in Benton Square Shopping Center in the 1500 block of Military Road – will soon house a Planet Fitness. Listen to me. This is unconfirmed information. UPDATE: Rumor confirmed: https://www.mysaline.com/big-economic-news-on-several-fronts-in-the-city-of-benton

However, I have some clues:

A source has told me that the owner of the old bowling alley property has a letter of intent from a fitness company. I called 10 Fitness and the Assistant Manager there said has no current plans to move to or expand to Benton.

I asked a spokesperson at the Planet Fitness location in Little Rock whether there would be a Benton location opening. The spokesperson said that they were expanding with 13 new locations over the next 3 years and Benton was “probably” one of those places.When pressed for confirmation on that specific location, the spokesperson said “I can’t say yet, but that’s probably it.”

Currently, there are two other tenants in this property. John’s Gym, who would be an obvious competitor of a fitness business, is located at the east end of the building. Young’s Jewelers is on the west end, near the street.

I talked to John Holland, the owner of John’s Gym. He said he received a notice to vacate and so his operations will be moving out of their next-door location in short. According to Holland, John’s Gym will be open for business next week in a former location of Dollar General at 714 Edison Avenue.

Ryan Young at Young’s Jewelers said that they have plans to stay put. They are aware of some kind of renovations going on next door, but not what exactly.

I’ll update this story as I get more information.

Benton Bowling Alley Sold, Open Another Week & Here’s What Else I Know 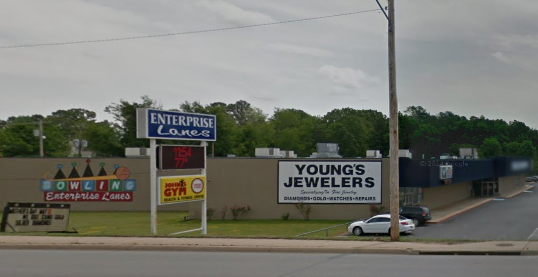 I’m a terrible bowler, so I’ve not been on point with news about Enterprise Lanes, Saline County’s only bowling alley for miles and miles. I think our next closest one is in Maumelle. You’ve probably heard by now that the owner of Enterprise has sold the building and it won’t be a bowling alley anymore.

Here’s what I do know:

It’s been sold to a company called Firethorn Holdings, LLC for $1.3 million. The County Assessor’s office lists that company’s address on Chenal Parkway. If you Google the address, it shows Chenal Storage Center (storage units) located there. If you Google “Firethorn Holdings, LLC,” you’ll get a lot of things, including a company in Georgia that does… I can’t pin that down exactly either.

I also have heard – and it’s unconfirmed – that the Enterprise Lanes will only be in operation for another week. So get at it while you can.

I’ve added copies of documents below, so you can peruse for yourself records that are available to the public. Tell me what you think. (PDFs)

Got any info I didn’t cover here? Feel free to comment!

Sad. You know the Harvest Foods store looks like it would make a great bowling alley. I wouldn’t think that Benton needs another storage facility. While I’m at it Benton could use a new movie theater in addition to other recreational facilities for us residents. Teenagers need places to go and have things to do. Come on City Council, time to step up to the plate.

I believe last Sunday’s Courier had an article that said the last day of bowling would be the 28th, which would be tomorrow.  Very sad about this.

Hate to see it closed for the town’s sake.  I have never been there so I guess a few more of us haven’t been there either.