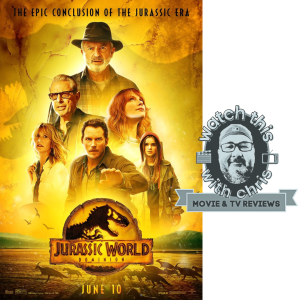 Like “Top Gun: Maverick,” this is another big blockbuster that we’ve all been waiting for. Obviously, we haven’t been waiting for this sequel since 1986, but you get what I’m saying.

After surviving the destruction of Isla Nublar (Jurassic World) and then dealing with the conspiracy at the Lockwood Estate (Jurassic World: Fallen Kingdom), Owen Grady and Claire Deering took Lockwood’s granddaughter, Maisie, with them to raise after learning she’s actually the clone of Lockwood’s daughter.

You still with me? Okay. Good.

Since then, they’ve been living off the grid, and under the radar, so as to protect Maisie. However, their “protecting” Maisie makes her feel like a prisoner, and she is unhappy. Not only is she unhappy, but she’s also an unhappy teenager. YIKES! Not only do Owen and Claire have Maisie, but they also have Blue, the Raptor that Owen trained at Jurassic World, and Blue has impossibly born an offspring. Of course, bad guys are watching, and they take Blue’s baby and Maisie. Now the hunt is on!

Chris Pratt (The Terminal List, Guardians of the Galaxy) is back as Owen, and the gorgeous Bryce Dallas Howard (Jurassic World, The Help) is back as Claire. Fun fact that I somehow didn’t know until this very minute- Bryce Dallas Howard is the daughter of the legendary Ron Howard! I’m a fan of both of these actors, but what really excited me about this movie was the return of the main stars from the original “Jurassic Park” trilogy! Laura Dern (Jurassic Park, Blue Velvet), Sam Neill (Jurassic Park, Hunt for the Wilderpeople), and the always great Jeff Goldblum (Independence Day, The Fly) return for more dino action. You’ll also see BD Wong (Jurassic Park, Mulan) back in this newest Jurassic adventure. Relative newcomer, Isabella Sermon, is back as Maisie Lockwood, and she does a fantastic job. My favorite character from this movie may be DeWanda Wise (The Harder They Fall, Fatherhood) playing pilot, Kayla Watts.

So, now you know kind of what it’s about and you know who’s in it. What you really are here for though is to know what I thought about the movie. Right? Of course, I’m right. I liked it…a lot. I will say there were a couple times during the movie when I thought, “I thought there’d be more dinosaur action.” However, not long after I’d have that thought, here they came. There was a LOT of “story” to digest in this movie, but you want that. Right? You want a good story and a good plot. I think you get that here. Sometimes though, you just want more action. I think that was me here. I could’ve stood maybe 10% more dinosaurs. Sometimes the story gets a little muddled. Sometimes the “tight spots) the characters find themselves in are a little too formulaic. I’m not going to give a spoiler, but the “promise” was annoying to me. Now we’re talking about dinosaurs living in the modern world, so we’re not fully looking for realistic, but the “promise” was ridiculous.

One reviewer wrote, “The screenwriters were so preoccupied with whether they could, they didn’t stop to think if they should.” It’s a good point. All in all though, it’s a fun movie. It’s fun to see the old characters interacting with the new generation of Jurassic stars. It’s a pretty nice way to wrap up the franchise. There are definitely things they could have done differently/better, but I’m not a screenwriter or a film maker.

“Jurassic World: Dominion” is rated PG-13 for intense sequences of action, some violence and language. I’m giving this one a 3.7/5. Go check it out for yourselves.