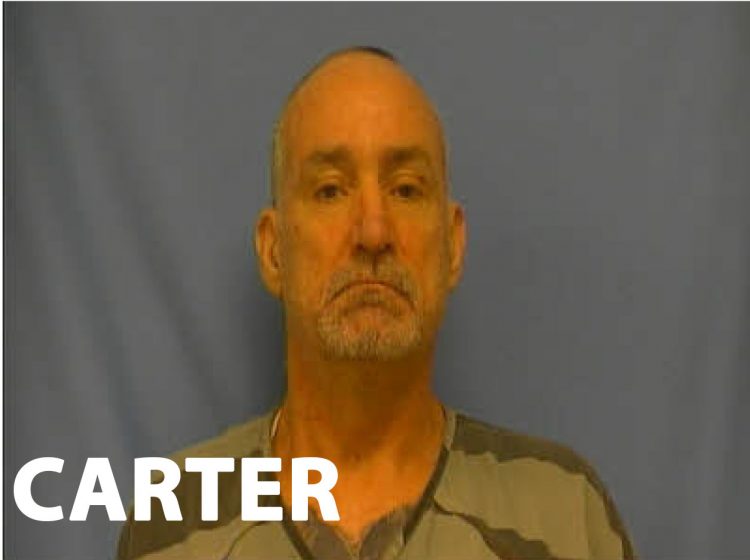 A Saline County jury found Toby Carter, age 54, of Hot Springs guilty of felon in possession of a firearm, fleeing, and possession of methamphetamine on July 8, 2021. Judge Ken Casady followed the jury’s recommendation and sentenced Carter to 70 years in the Department of Correction.

On December 7, 2020, Bryant police officer Derek Jester spotted Carter, driving a truck without a license plate light. After running the license plate, Jester discovered that the registered owner, Christina Floyd, also of Hot Springs, had no insurance and warrants for her arrest. Jester activated his emergency lights and followed Carter on Interstate 30. Carter pulled to the side of the interstate. A passenger exited the truck and Carter took off in great haste.

Carter eventually lost control of his truck and crashed into a tree on County Line Rd. After removing Carter from the truck, Jester searched the truck and debris and found a gun, methamphetamine, and drug paraphernalia.

At trial, Prosecuting Attorney Chris Walton argued that Carter’s flight from the police represented a substantial risk of injury or death to other motorists on the road. The jury viewed video that showed Carter disregarding stop signs, travelling at high speeds, and passing other cars on the road. Walton also argued that Carter fled from the officers because he was a convicted felon and had a gun and drugs in the truck.

The jury heard testimony that Carter was a level 3 sex offender and that he had failed to report to Det. Brian Branstetter of the Hot Springs Police Department as required. In addition to his felony convictions, Carter has a number of misdemeanor convictions for theft, public intoxication, fleeing, and possession of drug paraphernalia. In arguing for the maximum sentence, Walton showed the jury that the only time Carter did not commit crimes was when he was in prison.

Following the trial, Prosecutor Walton stated, “Carter is the kind of person that needs to be locked up for good. The violence that he has wreaked literally from coast to coast over the last 35 years demonstrates that he is a clear danger to the community.” Walton went on to thank the work and the driving of the Bryant officers that caught Carter and took him off the streets.