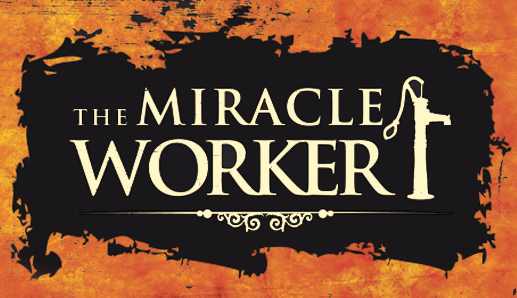 Few plays depict the courage and conviction of the human spirit as much as The Miracle Worker, based on the life of Helen Keller and her teacher, Anne Sullivan. The Royal Players will present this classic drama on Feb. 16-19 and Feb. 23-26 at The Royal Theatre at 111 S. Market St. in Benton.
Showtimes are 7 p.m. on Thursday, Fridays and Saturdays and 2 p.m. Sundays. Tickets cost $10 for adults, $8 for seniors 60 and older and military, and $5 for ages 3 years old to college student with school ID. Tickets can be reserved online at www.theroyalplayers.com. For phone reservations, call (501) 315-5483. Tickets  also can be purchased at the door on a first-come, first-served basis.
Kathy Bartholmey of North Little Rock directs the three-act play written by William Gibson and based on the Helen Keller autobiography The Story of My Life.
The play tells the story of young Helen – blind and deaf since infancy – who is tormented by rage and confusion until her parents hire Anne Sullivan, a gifted tutor who helps Helen communicate.
“The Miracle Worker is just as much about Anne Sullivan, who refuses to give up on Helen,” said director Kathy Bartholmey. “It is a moving story of how Anne’s gift for teaching and her grit and perseverance lead to that break-through moment that forever changes a young girl’s life.”
April Bartholmey of North Little Rock plays Anne Sullivan, and the role of Helen Keller will be played by Berkeley Courtney-Moore of Little Rock and Hannah Dickinson of Maumelle. The Keller family is portrayed by Ersella Hughes of Hot Springs (Kate Keller), Joshua Grandon of Benton (Mr. Keller), and Johnny Jackson of Bryant (James).
The cast also includes Jordan Sanchez of Bryant (Doctor); Melody Small of Little Rock (Martha); Debbie Wright of Maumelle (Aunt Ev); Robert Ballew (Anagnos); of Benton; and Jaketa McClure (Viney) and James Smith  (Percy), both of Benton.
Rounding out the cast of Blind Girls and ensemble members are Kate Benham,  Julianne Flora, and Katie McCallister, all of Benton; Amber Thompson of Bryant;
Madison Courage Fleck of North Little Rock; and Brooklyn Courtney-Moore, Isabelle Marchese and Makenzie Taylor, all of Little Rock.
Lisa Goodrich of Benton and Alyson Courtney of Little Rock are co-producing the show, and Destiny Marchese of Little Rock is the assistant director.  The show includes set design and construction by Carl McBride; costuming by Dee Burton and Erin Marchese, both of Little Rock, and Sharilyn McPherson McCallister of Benton; technical supervision by Timothy Huddleston of Bryant; props by Misty L. Failor Jezierski of Benton; dialect coaching by Sarah Clayton of Benton; and sound by Phoebe Earles of Benton.
There’s a special appearance by Stuart, a 13-year-old Nova Scotia duck tolling retriever, who is handled by Lori Buckner Martin of Little Rock. Stuart is a retired competitor in obedience and rally, and previously played the role of Sandy the Dog in the Royal’s production of Annie.
The Miracle Worker premiered on Broadway in 1959 and closed in 1961 after 719 performances. The 1962 film version starred Anne Bancroft as Anne Sullivan and Patty Duke as Helen Keller.