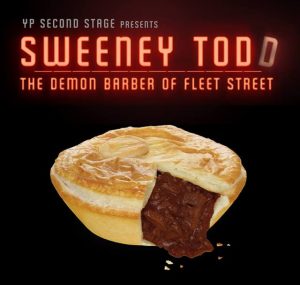 Show times are January 4th through 14th on Thursdays, Fridays and Saturdays at 7:00 p.m. and Sundays at 2:00 p.m.  Admission is $15 for adults, $12 for seniors (60+), college age with a valid student ID, and military, and $6 for students (ages 3 – high school). Tickets can be purchased online now at www.theroyalplayers.ticketleap.com. Tickets may also be purchased at the door on a first-come, first-served basis. You may also call 501-315-LIVE to make reservations by phone.

An infamous tale, Sweeney Todd, an unjustly exiled barber, returns to nineteenth century London, seeking vengeance against the lecherous judge who framed him and ravaged his young wife.  The road to revenge leads Todd to Mrs. Lovett, a resourceful proprietress of a failing pie shop, above which, he opens a new barber practice.  Mrs. Lovett’s luck sharply shifts when Todd’s thirst for blood inspires the integration of an ingredient into her meat pies that has the people of London lining up!