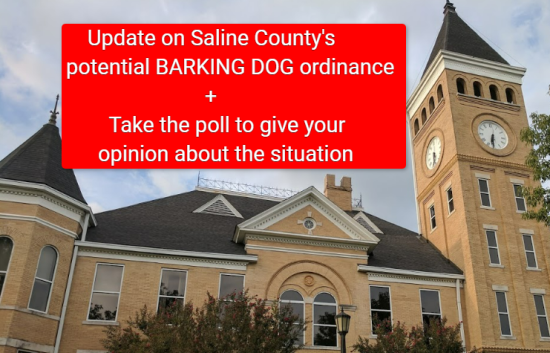 We had a lot of interest this week in a potential ordinance regarding barking dogs. It was discussed in a Saline County committee on Tuesday, December 6th, so we wanted to update you on what happened. And after that, you can take the anonymous poll about your opinion. Look for the orange words.

It was the Public Works and Safety Committee that discussed the matter. First, let’s look at the wording of the ordinance (in maroon) and then we’ll summarize it, talk about who brought it forward, who voted for and against it, and what happens next.

EXHIBIT “D” – ORDINANCE NO. ____-2022 – BE IT ENACTED BY THE QUORUM COURT OF SALINE COUNTY, STATE OF ARKANSAS, AN ORDINANCE TO BE ENTITLED:

“An ordinance prohibiting excessive, frequent, or habitual barking, howling, yelping, or other nuisance behavior related to canines kept within the unincorporated areas of saline, county, and levying a fine for any violations of such.”

NOW THEREFORE BE IT ORDAINED by the Quorum Court of Saline County, Arkansas that:

Article 1. The causing of any unreasonably loud and disturbing noises of such volume or duration as to be detrimental to the life or health of any individual, or to disturb the public peace and welfare is prohibited.

Article 2. It shall be unlawful for any persons, firm or corporation to allow excessive, frequent, or habitual barking, howling, yelping or other nuisance behavior. It shall be unlawful to keep on premises or allow to run at large any canine, which by loud and frequent barking, howling, yelping, or other nuisance behavior shall disturb the peace and quiet of a neighboring property owner or owners.

Article 4. Any violation of this Ordinance shall be punishable by a fine not to exceed the sum of five hundred dollars ($500.00) per violation. The Saline County Sheriff’s Office shall enforce this Ordinance.

Article 5. Before a citation is issued, the following three (3) provisions must be met:

(a) The neighboring property owner or owners must demonstrate, by affidavit or other evidence, that they have made at least two (2) attempts to resolve their complaints regarding excessive, frequent, or habitual barking, howling, yelping or other nuisance behavior with the canine’s owner or owners without success; and

(b) The complainant must have sufficient audio-visual evidence demonstrating to the Saline County Sheriff’s Office that there is cause to believe that the excessive, frequent, or habitual barking, howling, yelping or other nuisance behavior has occurred as set forth in Article 3; and,

(c) Lastly, the neighboring property owner must have a signed statement, which may be in an affidavit signed by the original complainant, from another individual, that is not a family member or resident of the same household, verifying the evidence, set forth Article 5(b), provided to the Saline County Sheriff’s Office.

Article 6. This Ordinance applies to only those areas of Saline County which are unincorporated.

Article 8. REPEALER: All laws and parts of laws in conflict with this ordinance are hereby repealed.

To summarize some of the main points of the proposed legislation, it would only cover the parts of the county that are outside the city limits (unincorporated). It would also only cover nuisance behavior, and the complainant would have to show proof of two attempts to resolve the problem, and have audio-visual evidence. Finally, the penalty is only described as monetary, and the fine would be up to $500 but not exceeding that amount.

After some discussion about how the Saline County Sheriff’s Office would enforce this, and whether some other legislation was already in place that would cover the issue, the committee members took a vote.

It’s important to note that county committees discuss and make recommendations to the Quorum Court, then an ordinance or resolution is passed if the Quorum Court votes yes. In this case, the proposed ordinance was still in the committee.

Justice of the Peace Pat Bisbee (Dist 1 – R), one of the Saline County Quorum Court members on this committee, brought it forward for discussion. JP Everett Hatcher (Dist. 2 – R) , made a motion to call for question (vote yay or nay). JP Mark Grimmett (Dist. 5 – R) seconded the motion. You can see the location of the districts on the Quorum Court map below. 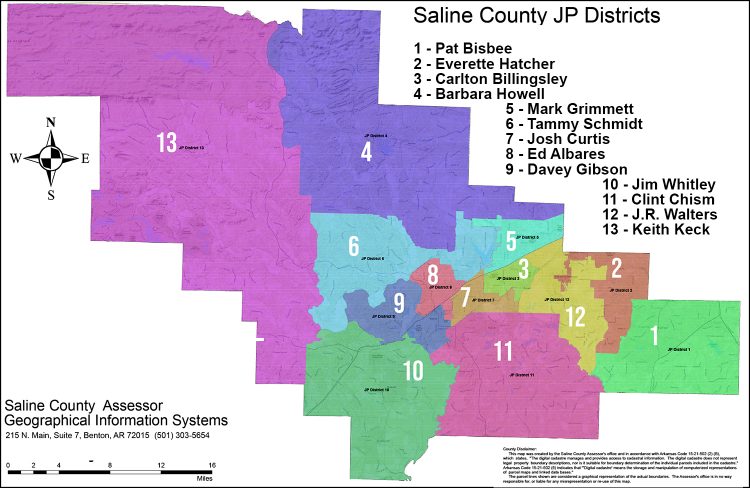 When the vote was taken, 11 voted NAY and 2 voted YAY. Those for it were Bisbee and Hatcher. Because the proposed legislation failed in committee, it will not move forward to the Quorum Court for discussion and vote. There is the option to bring forward a different version of it in the future, but as it stands, the ordinance is dead.

Let’s have some fun and take a poll ✔️to see what everyone thinks about this. The poll is below. Put in your answers, then scroll down👇🏼 to see the link that shows everyone else’s answers.

The Saline County Public Works and Safety Committee, as well as the Finance Committee, will meet Tuesday, December 6th. The public is invited to come to the meetings, to begin at 6:30 p.m. at the Saline County Courthouse, in Courtroom #3. The agendas follow:Public Works and Safety Committee– Appointment to Saline County Arkansas Waterworks & Sanitary Sewer Public Facilities Board (Woodland Hills) – Steve Dawson– Resolution Adopting Act 833 Funds Recommendation by the Intergovernmental Cooperation Council. Act 833 Funds to be distributed at the following percentages: 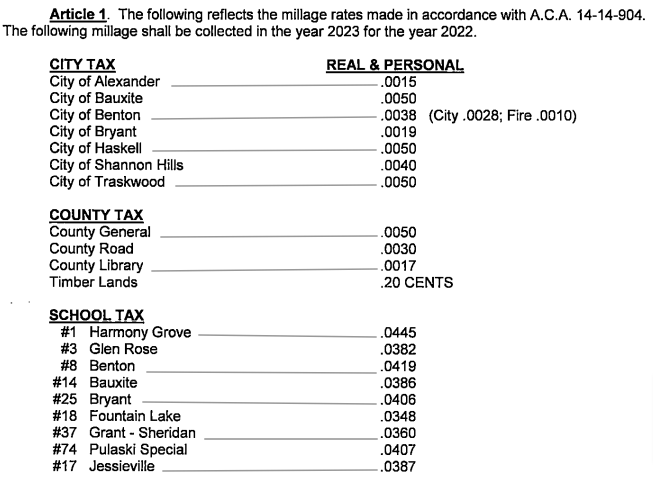