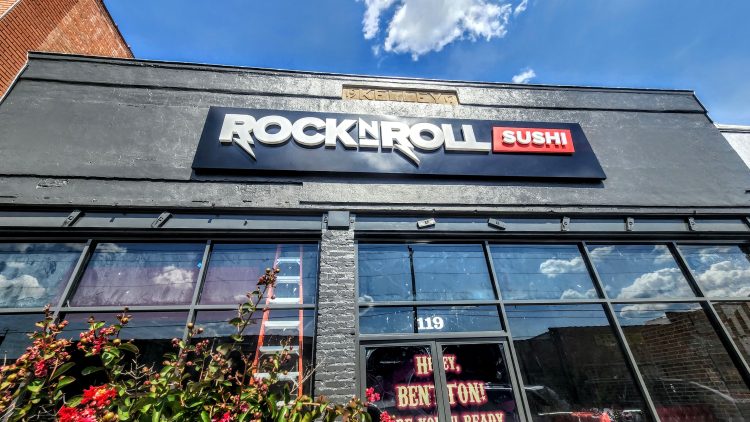 I don’t know if this will be the first time Downtown Benton has ever served sushi, but if not, it’s been a very long time. Jana Helton, the owner of this location of Rock N Roll Sushi, is excited to finally open the doors soon. Read through a tour of the restaurant first and I’ll give opening details below that.

They are nearing completion of the inside of the restaurant at 119 N. Market Street, but there are still a few things out of place, so instead of a wide shot, I offer a taste of the textures throughout. 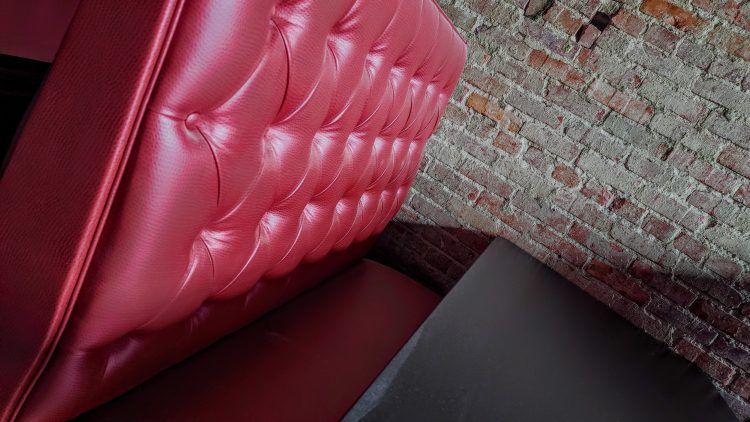 It’s a red and black palette, just like my Ramones t-shirt. And my AC/DC t-shirt. And The Killers and The Struts… The booths will seat six, next to an exposed original brick wall that was erected over 100 years ago. The tables and chairs are still in a jumble, and you can see a tease of bare concrete floor that will be polished and pretty for any clicking heels of rock n roll boots on a guest. The focal structure as you enter the restaurant, is this large drum-shaped cover the server window. When it’s finished out, it will look like a huge – you guessed it – drum. Shiny black subway tile and chrome diamond plate accents complement the structure. 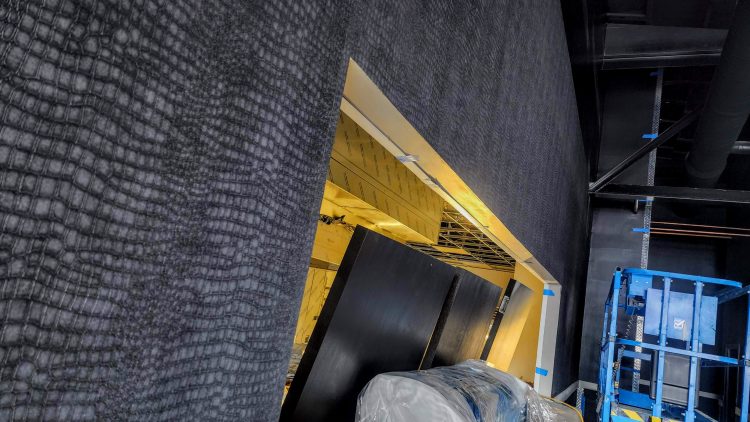 On the left side of the room, ebony snakeskin wallpaper opens to a window for viewing sushi preparations. It’s half the fun just to watch your meal being made. There are two back hallways – one with restrooms, and the one in this photo above leads to two doorways. One goes to an unfinished space that is possibly for lease… The other leads to a courtyard that will eventually have patio seating and the all-important wall, shielding customers from the afternoon sun in the west. I said I would tell you more about the opening date, and Helton laughs about the previous date she gave me of mid-July. That date has come and gone, obviously. She wanted the building to get all it’s little things fixed for a great customer experience, so the date was moved to September 6th.

Coincidentally, this is the same date the Saline County Fair begins this year, so that means the Fair Parade will be moving right past the doorstep on their opening day. That’s convenient. You might see some activity in the days leading up to the 6th. Staff will be in training for about two weeks to learn the Rock N Roll ways.

If you want to get an idea of the menu, visit the main website for Rock N Roll Sushi. Jana joked that they might have a special item with a local flair, “maybe we’ll have a Peeler Bend Roll.” My thoughts were – PBR? That’s not what that stands for, but I’d be willing to try it… 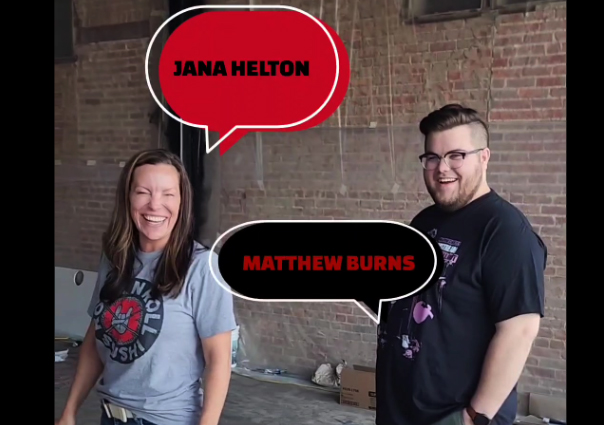 It’s getting closer. We first told you in November 2021 about a new restaurant coming to downtown Benton. Now we have more details, more video and a firmer opening date.

First off, meet owner Jana Helton in the video below 👇as she gives us a tour of the building at 119 N. Market Street. It’s currently under renovation, but you can see the progress and imagine the near future. You may also recognize Matthew Burns in the video, from productions at The Royal Theatre and as one of the servers for two years at Valhalla Restaurant. Matthew will be the manager at Rock N Roll Sushi in this piece of living history constructed in 1915.

The two walked us through the property, which will sparkle with rock-themed décor in addition to showcasing the historic nature of the architecture. A lot is still under wraps – literally – with paper covering a beautifully polished floor in contrast to plastic covering a (counts on fingers) 107-year-old brick wall. Several windows were originally cut into the high ceilings for ventilation and sunlight, during a time when the ice cream shop next door was just a parking lot for a car dealership. Back then, a car still resembled a buggy with no horse.

Jana pointed out that there will be a bar in the front, serving beer, wine and sake. Underneath the canopy of a giant replica of a drum, will be where servers collect meals to bring to patrons. Toward the middle is a long window where customers will be able to watch the sushi chef make all sorts of edible art. The restrooms are just beyond that, and then there’s a back hallway that might interest current or potential business owners, because it connects to 2000 square feet of space just waiting for a tenant.

Before I left, Jana stated that they want to open mid-July. I helped her and Matthew record a separate video saying they are now looking for staff. Enjoy the tour, and find out more about Rock N Roll Sushi at www.facebook.com/rnrsushibenton. Also see the previous article, video, and photos below. 👇 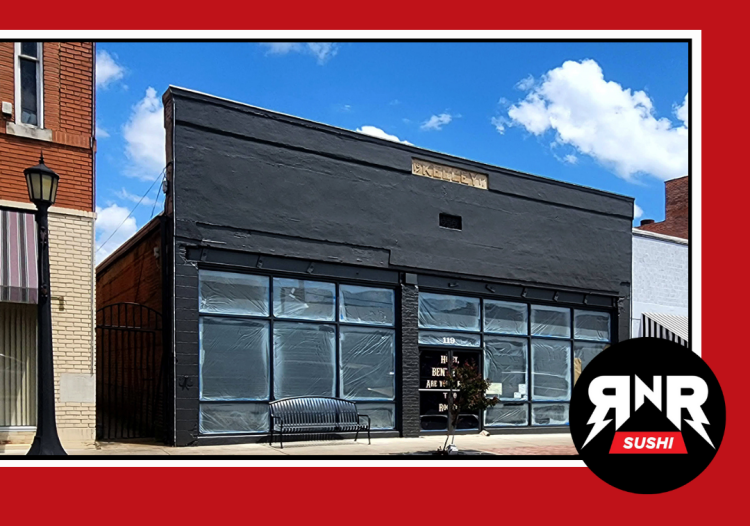 We’ve waited a bit to update you on Rock n Roll Sushi, considering there have been some obstacles to opening restaurants lately. Equipment delays, construction costs and more have held up progress. But if you have driven by in the last day or so, you’ll notice there are signs up in the front that say they are coming soon. How soon?

I spoke with the owner on Wednesday and they’re waiting on a liquor license and hoping to open the doors .

Meanwhile, see the new video below and read more about what’s to come… 👇

Read more below about this new restaurant. Are you ready to rock? And roll? And eat Sushi? Well downtown Benton apparently is.

A local franchisee is gearing up to open a location of Rock N Roll Sushi at 119 N Market Street, right next door to Just Ice Cream. The introduction of this restaurant in this area of town means that downtown will have around 8 great choices for places to eat. That’s come a long way from only having one – in a few short years and also through a pandemic. 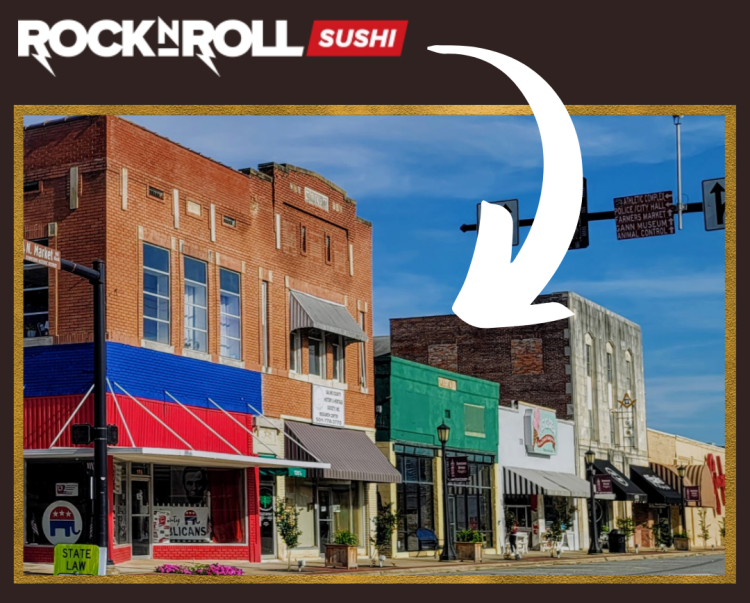 The first Rock N Roll Sushi opened in 2010 in Mobile, Alabama and quickly ramped up to over 50 restaurants in 8 states. The theme is very apparent. It’s about good food of course, but also you guessed it – rock n roll. 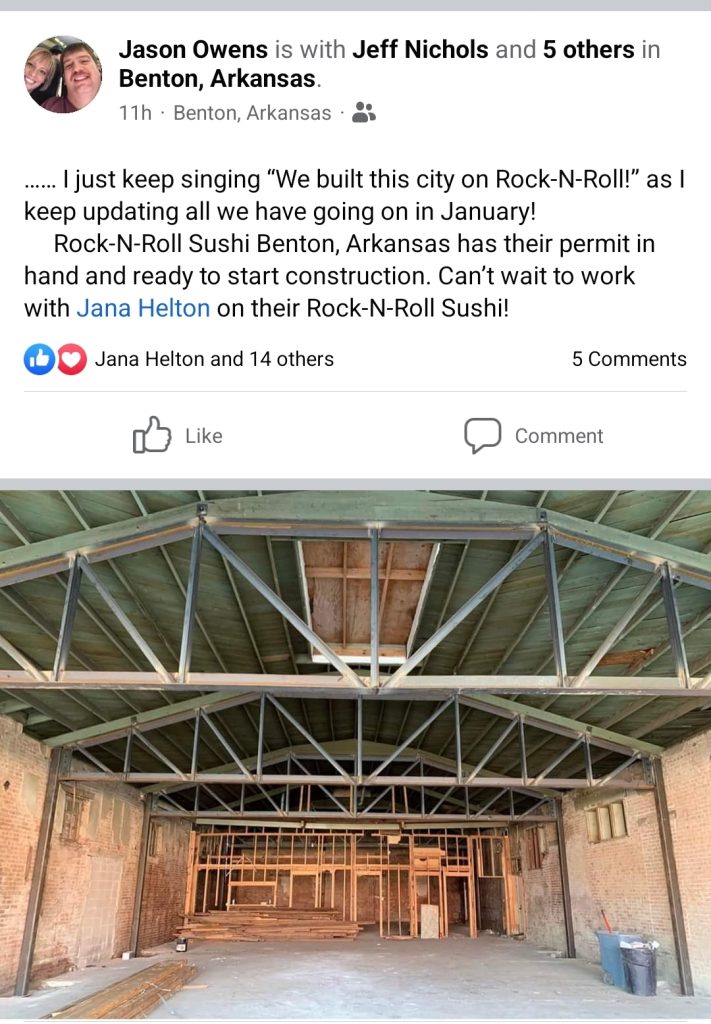 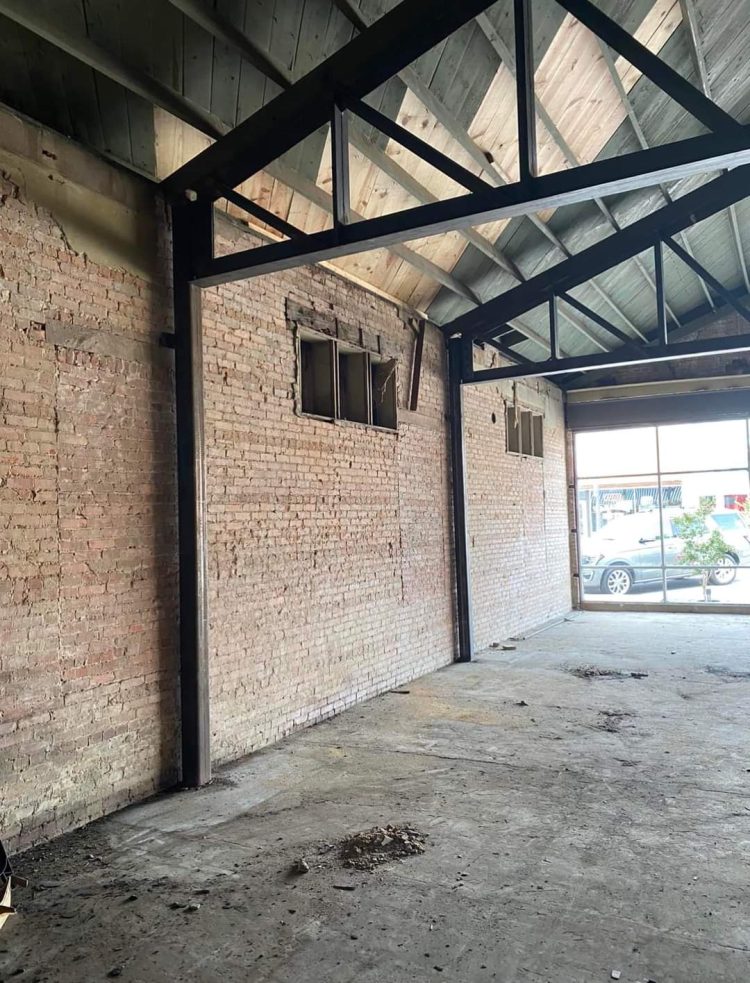 🤘 There are three other locations, one opening soon in Conway and two already open in Little Rock downtown and at Chenal.

A representative of the company said this location in downtown Benton plans to open in the first quarter of 2022. It will occupy the front half of the building at that address (above in the green building). The franchisee said there are plans for a second eatery in the rear of the property. As you walk by or drive by on Market Street, you no longer have to wonder what is going into that empty building.