Previously, MySaline explained that certain landowners near the Saline River sent a document to Saline County Judge Jeff Arey to ask that the County abandon maintenance of two roads – Tony Kelly Road and Mountain View Road (map below). The documents are called a “Petition to Vacate.” These roads dead-end across from each other, with the river crossing in between. Today, Judge Arey held a second public hearing to gather further information before making a decision of whether to approve or reject the landowners’ petition. In the end, he rejected the petition, meaning the road will stay open.

See the videos below (Parts 1 and 2) for the compelling, passionate, informative and at times entertaining statements made by interested parties on both sides. Letters of opinion have been filed with the Saline County Judge from the three appointed road viewers, as well as a State Representative and authorities at the Arkansas Game and Fish Commision. See their letters of opinion below.

Saline County Judge Jeff Arey has scheduled a second hearing in a matter concerning 1) property owners near the Saline River, 2) public roads, and 3) public users of that road to get to that river.

“There is no formal agenda set for the hearing but Judge Arey will allow the Petitioners to present evidence, testimony, etc. regarding the petition and allow those who oppose the petition to speak against it. He may limit the comments if everyone keeps saying the same things over and over. After hearing the testimony and comments, he will take a short recess to make his decision and then he will announce his decision.”

Letters of opinion were filed by three viewers that Judge Arey appointed: James Zahnd, Terry Benham, and R.J. Hawk. Their reports were due Friday May 17th and are seen below. Also included are letters from Lanny Fite, Arkansas State Representative for this district, and Pat Fitts, Director of the Arkansas Game and Fish Commission. Of the 5 letters, all of them recommend the County retain maintenance of the roads.

THE LETTERS OF OPINION: 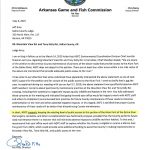 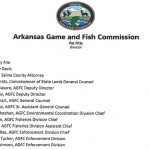 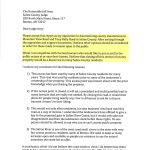 MySaline reported on April 3rd, 2019 that property owners near the river at portions of Mountain View Road on the north side and Tony Kelly Road on the south side submitted a Petition to Vacate to Judge Arey. The petition states that they want the County to abandon the road, so it would, in effect, revert to private. Their statement said they wished to do this because of undesirable activity in the area. It is their hope that if the road becomes private, the property owners can gate it and keep out those individuals who have been irresponsible with the property.

In the petition, property owners claim, “Criminal activities include, but are not limited to, drug use, public indecency, underage drinking, property damage, illegal dumping, pollution of waterways, trespass on private lands, poaching and shooting of guns on and toward private properties, breaking and entering, and theft from petitioners property.”

On the other side of the issue, there are also responsible individuals who use the roads as the only passage to a miles-long section of the river. They fish and canoe on this section of the Saline as well as keep it clean, and they want to keep access to it.

On April 18th, Judge Arey held the first hearing and many were present, but the judge didn’t take public statements that day. Instead, Arey appointed three people to be viewers of the road for a few weeks and report what they see.

See the previous article on this for more maps, and the petition presented to Judge Arey: https://www.mysaline.com/river-road-petition/