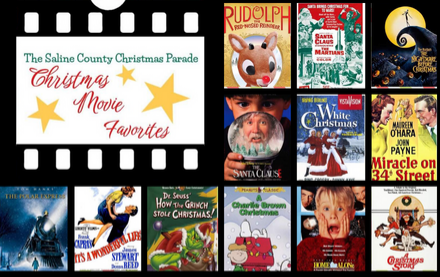 See the list of holiday events and submit your own, at www.mysaline.com/holiday-events

The Saline County Christmas Parade is coming up once again in Downtown Benton The Downtown Business Partnership revealed the theme for the 2022 parade is “Your Christmas Movie Favorites.” Let your imagination and creativity run wild! Your float can show a favorite scene or represent the movie as a whole. The judges will be on the lookout for the details that make yours special.

Come to downtown Benton on Monday, December 5th. Grab a spot early on the sidewalk to see he parade will begin at 6 p.m. Parade floats will be handing out candy and Santa will be there too. Stay after the parade to see Santa in the Saline County Courthouse gazebo on Main Street.

Register to have a float in the parade or just come watch. Watchers should park and walk to a spot on the side of Market Street, North Street or Main Street. Come early to get a good spot. The parade route is shown below. Click the image to enlarge it. 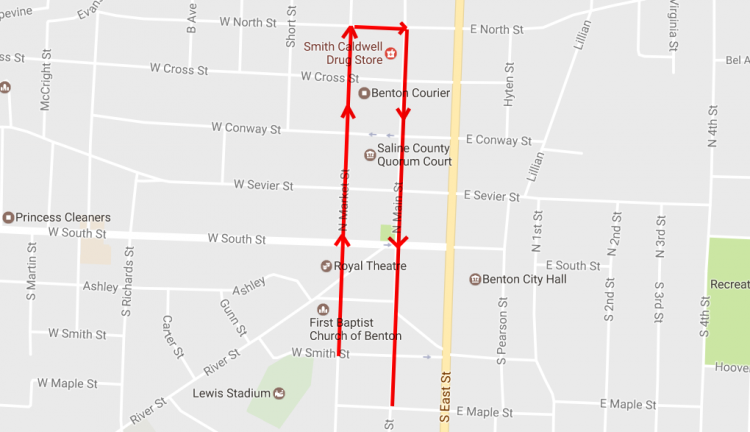 Want to be a float or other entry in the parade? Here’s how:

Register to participate in the Saline County Christmas Parade, using the form embedded below. Be sure to use the navigation arrows to see the rules on page 2, or scroll past the PDF to see the rules in text form.

Turn in the form

• All competing entries should decorate their floats in the them of their favorite Christmas movies. If possible, entries should incorporate lights. This makes for a brighter and more festive parade.

• 🚫🎅🤶No one is permitted to dress as Mr. & Mrs. Claus; other costumes are encouraged.

• Candy may be handed out, not thrown.

• Entries should boldly display the name of their organization on both the right and left side for judges and newspaper coverage.

• Each organization is responsible for the safety of children taking part in their entry. Make sure children have constant supervision. Do Not allow children to Hang off the sides of entries. Flashlights are encouraged.

• Parade entries do not line up in numerical order.

• Numbers are given only to those competing.

• Do not approach the line up by coming from Market St. This creates a traffic jam as entries attempt to turn around and line up. Please approach from the direction of the railroad tracks on one of the side roads. Most entries can line up on either side of Market St. Some large groups will wait on the side roads. As the parade begins, entries will alternate right and left sides as needed. Here’s a map for where to go: 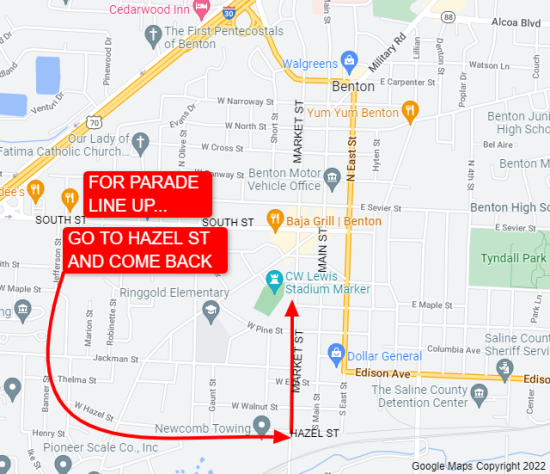 • If possible, come as a group; this minimizes confusion and lost children.

• Avoid large gaps of space between entries in the parade. One very slow entry can stop the parade. Go at a reasonable, safe speed for your entry. Do not build a float that has to go at a snail’s pace.

• Begins on Market St at CW Lewis Stadium parking lot. The Benton Jr. ROTC begins the procession. After Market St, the parade turns right on North and right on Main. Santa will get off at the Courthouse on Main to greet children. Entries should not stop and disband until they pass White’s Furniture on Ashley St.

The parade route is shown below. Click the image to enlarge it.

• If competing for “Best in Show,” please indicate that on your registration form. Only those that specify will be given a number by phone in advance. Display your number on both the right and left sides of your entry. Entries should boldly display the name of their organization on right and left side of float/vehicle for judging purposes

• All competing entries must be decorated as a Christmas movie. Judges will sit at the start of the parade. First place will receive $100 Second will receive $50 and third $25. Winners will be notified by phone. All floats are encouraged to use lights.

• Judges will select winners that best demonstrated the parade theme. Judges will base decisions on originality, boldness, creativity, and general enthusiasm for the theme.