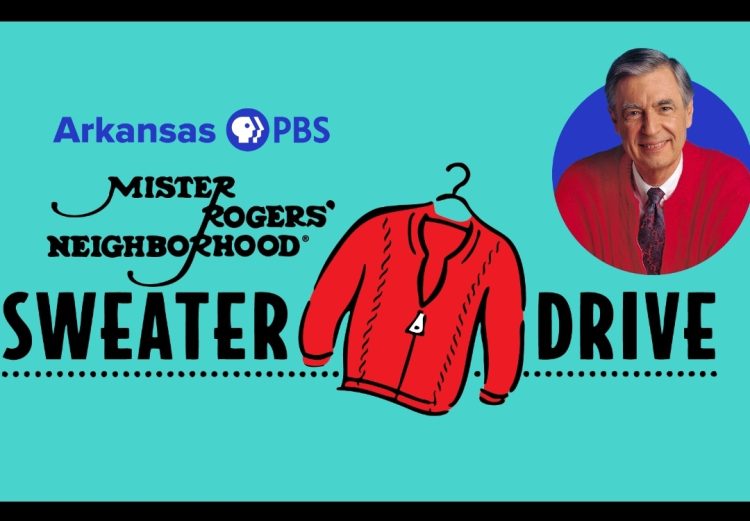 Donate a sweater in tribute to Mister Rogers this year.

Arkansas PBS and 44 libraries are partnering to sponsor the Mister Rogers’ Neighborhood Sweater Drive as a tribute to Fred Rogers and his example of being a caring neighbor. This drive will be held Nov. 5-30.

“Fred Rogers’ cardigan sweater has come to represent the gentle spirit, warmth and nurturing of the neighborhood. Arkansas PBS is proud to further his legacy by working with outstanding library and charity partners across the state through the Mister Rogers’ Neighborhood Sweater Drive,” Arkansas PBS CEO Courtney Pledger said.

Libraries are asking the community to donate new or gently worn sweaters, and other cold-weather clothing. You can bring your donation to the Bob Herzfeld Memorial Library at 1800 Smithers in Benton, or one of the other locations listed below. Sweaters collected in this drive will be distributed by various local charities.

Drop your donation at Arkansas PBS headquarters in Conway or one of these libraries:

“All of us, at some time or other, need help,” Fred Rogers said. “And, whether we’re giving or receiving a sweater, each one of us has something valuable to bring to this world.”

Additional information is available at myarpbs.org/sweaterdrive.

To help set the tone for a “comfortable” visit with his young viewers, Rogers put on a sweater and changed into sneakers to help children settle in for “Mister Rogers’ Neighborhood.” All of Rogers’ original sweaters were knitted by his mother, Nancy McFeely Rogers. Each year, she knitted a dozen sweaters and gave them to family and close friends at Christmas.

For more than 40 years, “Mister Rogers’ Neighborhood,” PBS’s longest-running children’s series, earned four Daytime Emmys. As a testament to his legacy, Rogers received a Lifetime Achievement Award in 1997 and was recognized in 2002 with a Presidential Medal of Freedom, the nation’s highest civilian honor, for his contributions to children’s development and education using broadcast television.

The Fred Rogers Company was founded by Rogers in 1971 as the nonprofit producer of “Mister Rogers’ Neighborhood” for PBS. In the years that followed, it not only created hundreds of episodes, but it also extended Rogers’ values and approach to other efforts in promoting children’s social, emotional and behavioral health and supporting parents, caregivers, teachers and other professionals in their work with children. The Fred Rogers Company continues to build on his legacy through a wide variety of media and by engaging new generations of children and families with his timeless wisdom. Additional information is available at FredRogers.org.