From a previous version of MySaline:
What’s the New Business Next to Captain D’s?
Posted by Lisa Graves on January 16, 2015 at 12:30pmSend
Does anyone know what’s going in next to Captain D’s? Please don’t say fried chicken or BBQ. 🙂 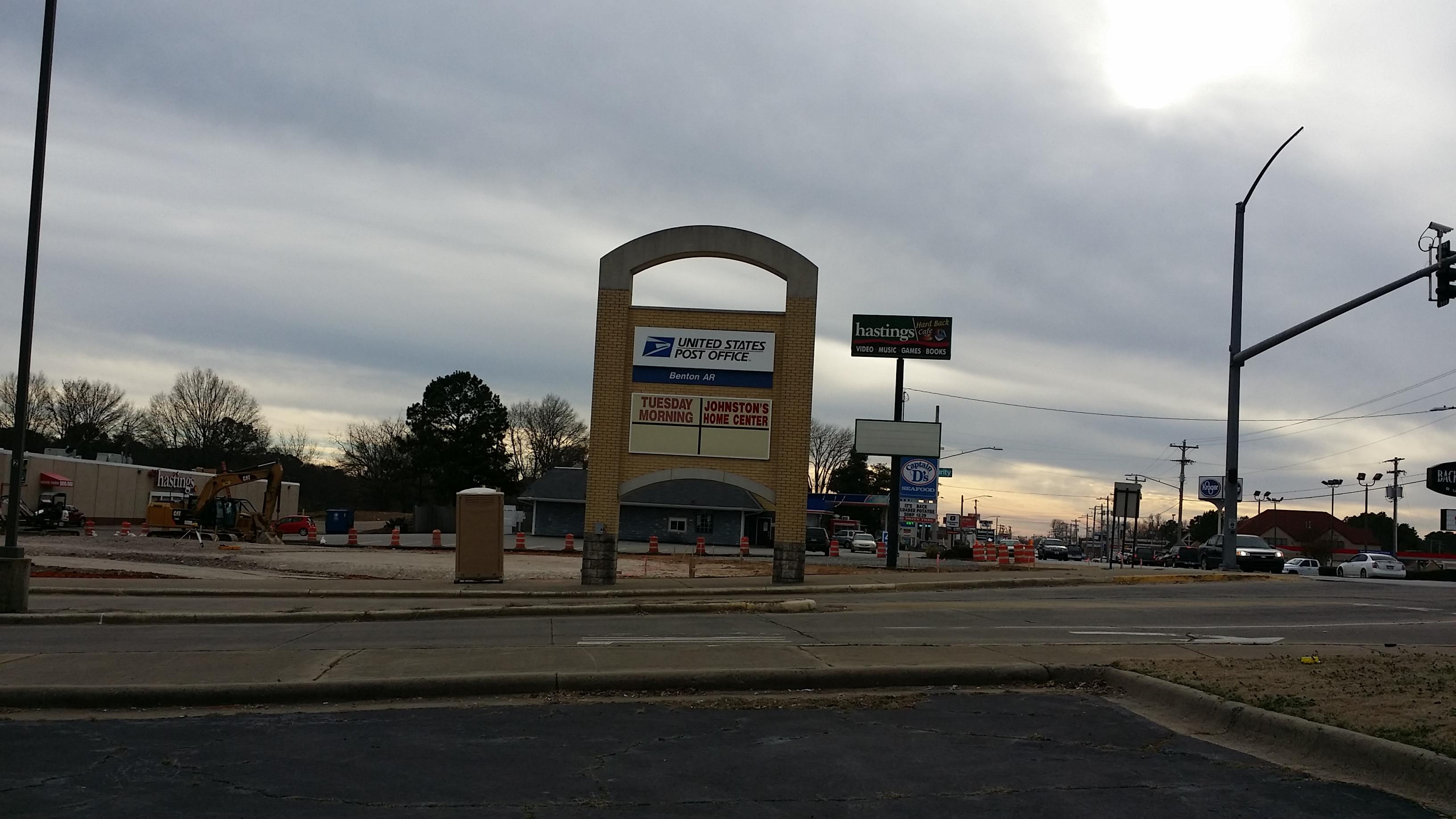 Photo by Shelli Poole
Comment by Renea Sturch Landreth on January 27, 2015 at 6:27pm
I don’t know why they wouldn’t use an existing empty storefront. But…we definitely need an urgent care clinic. I work in the ER on weekends, and we get tons of phone calls each and every weekend from people wanting to know where the closest one is so that they can avoid coming to the ER Especially when it’s for something simple like strep throat or a flu swab. One of the after hours clinics in Bryant isn’t open on the weekends, and I’ve been told by people calling that the others have very limited hours on weekends. So I hope this one is more flexible when they open.

Comment by Heather Newsam on January 22, 2015 at 12:53pm
Little Caesar’s made an old mechanic’s garage into a very stylish pizza joint. The urgent care clinic in Bryant is in the old Papa Murphy’s location. It can be done.

Comment by Jack Guenther on January 22, 2015 at 12:46pm
Many times it is as cheap or cheaper to build than to convert an existing building to your needs. As for existing store fronts, we need those for liquor stores next year.

Comment by Wendy Friend on January 22, 2015 at 11:26am
I agree with Heather, another medical clinic is the last thing we need especially with them building a NEW building. Plenty of others that could be used.

Comment by Heather Newsam on January 21, 2015 at 8:00pm
My fear is that the business will fold in a couple of years, if not sooner, and then we will have yet another empty storefront on one of our main streets. I’m just not sure there is enough of a need to support that sort of business long term. Our medical community does not seem to be hurting and we have at least three urgent care/after hours clinics just 5 minutes up the road. It simply does not warrant new construction. There’s that lovely little shopping center just across from Burger King that has room amongst others. They could have used it to draw traffic downtown too to the buildings that have been recently remodeled.

When John and Harriet Phillips divorced, it was basically the end of The Phillips Company, as Uncle Sam Walton sold off the franchise. Some of the larger stores (Geyer Springs — where I worked) stayed Food-4-Less, but Benton was converted to the Bud’s that is mentioned below and still run by Sam and family.

To the best of my memory, that is the way it all went down — I tried to filter out some of the “gossip” that was rampant in the company while it was all going down.

good point, Heather. Although, I don’t know if it’s always that easy. Perhaps they got a loan to build – or money from a parent company. Perhaps they don’t want to rent. Perhaps the other locations weren’t right for their business. perhaps it’s someone related to whoever owns this property. But I definitely see your point, given the number of empty storefronts!

Well that’s disappointing. Why do we need new construction for a medical clinic? They could move into any of the dozen or so empty store fronts in town. Follow the example of other local businesses and reuse what’s already there.

Good history! I love it.

I used to work there back in the day. It was Food 4 Less back in the early 90’s (I started there in 1993) and then when that closed down it was taken over or bought out by Wal-mart and they opened a discount store called Bud’s and then when that went out of business they moved all of us employees to the new Wal-Mart on I-30 and the building remained vacant until Hastings went in there.

Comment by Jeffery Thomas on January 20, 2015 at 10:39am
Where Hastings is at was A Buds store and before that it was a food 4 less grocery store warehouse type.

The business by Captain D’s is going to be a medical office. We’ve heard LOTS of rumors about the bowling alley but nothing concrete yet.

Comment by Shelli Poole on January 19, 2015 at 4:37pm
Ok, I finally drove by there after the parade today to see what you were talking about. I didn’t realize it’s new construction. I bet Hastings is not going to be happy about something blocking the view of their store. While we’re on the subject, someone asked what store was in the Hasting’s building before Hasting’s was. Remember, Hasting’s moved from up the street by Sutherland’s. Anyone got a tip?