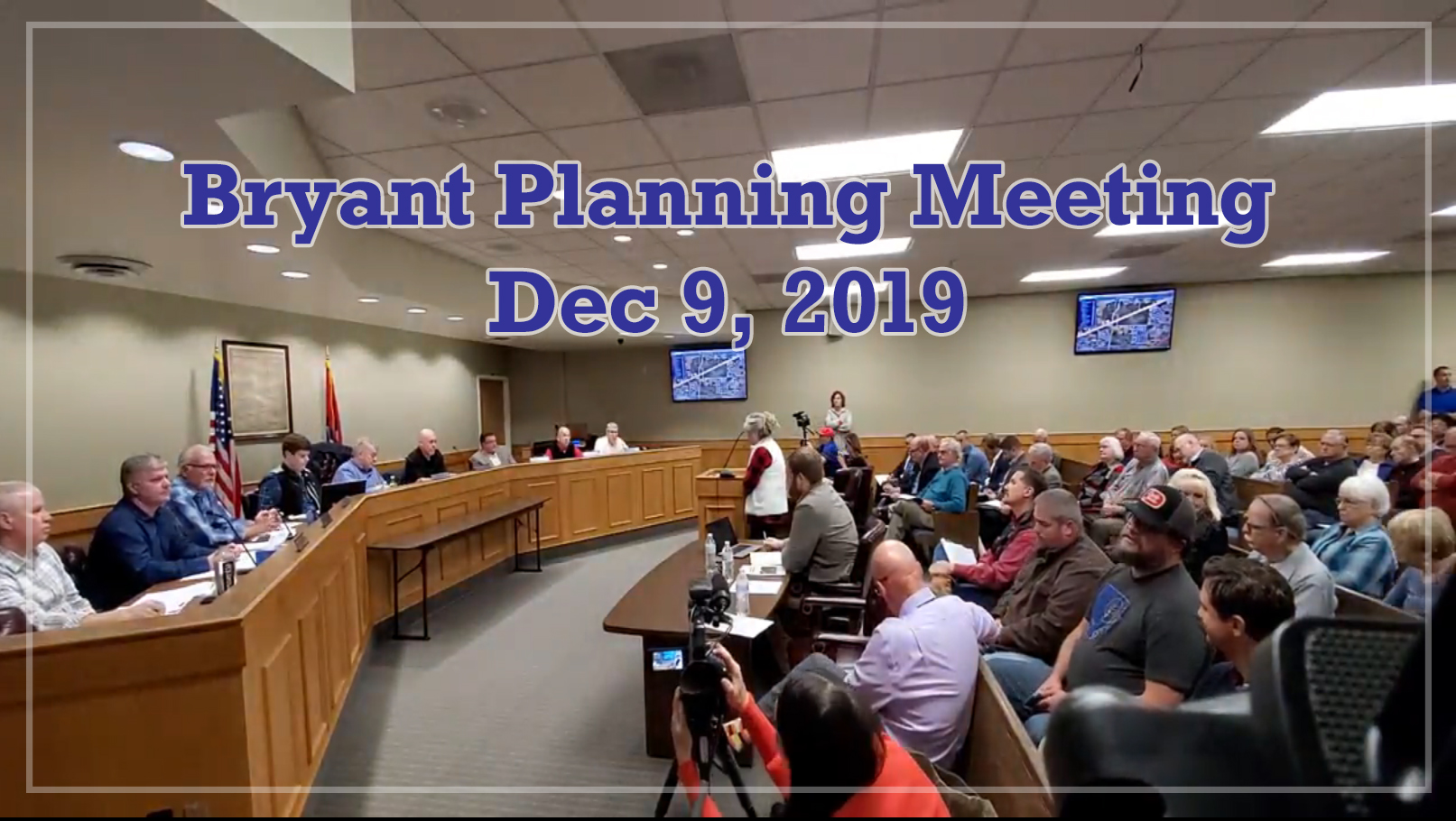 Several Bryant residents came forward to speak in opposition to the large warehouse that LKQ has planned, but in the end, the Planning Committee voted unanimously to approve the development. See video below. There were other items on the agenda for Monday night’s planning meeting, but most of the crowd in the full room came to say their peace on this one. About 60 residents came and about eight representatives for LKQ were also present and eventually spoke for their plans.

Twelve of the neighbors spoke about concerns of their safety, noise levels, wildlife displacement and aesthetic value being compromised. LKQ representatives promised that trees would be kept in the buffer zone, which is platted to be about 50 feet, according to one spokesperson and that most of their trucks are box trucks but that they do have some larger ones. The company also said they modified their plans to move a driveway so traffic wouldn’t exit to Raymar Road, which serves as the border between the development and some of the nearby neighborhoods.

In the end, the Committee members must vote according to whether the company meets their requirements. In this case, the zoning is correct for this type of business, and the company met all the requirements for engineering, environmental and other stipulations set forth. Therefore, the committee voted yes.

Committee Chairman Jim Erwin had to call residents to order several times while LKQ representatives spoke. As the crowd exited, at least one resident, Wanda Jones, loudly addressed citizens in front of City Hall. Jones stated that it is “stupid to have a 300,000 square foot warehouse in a community” and she is “tired of Bryant city officials running our city.” Jones also implored fellow neighbors, “don’t give up, that’s what they want us to do.” The residents plan on appealing the decision. Meanwhile LKQ hopes to begin construction in 2020. 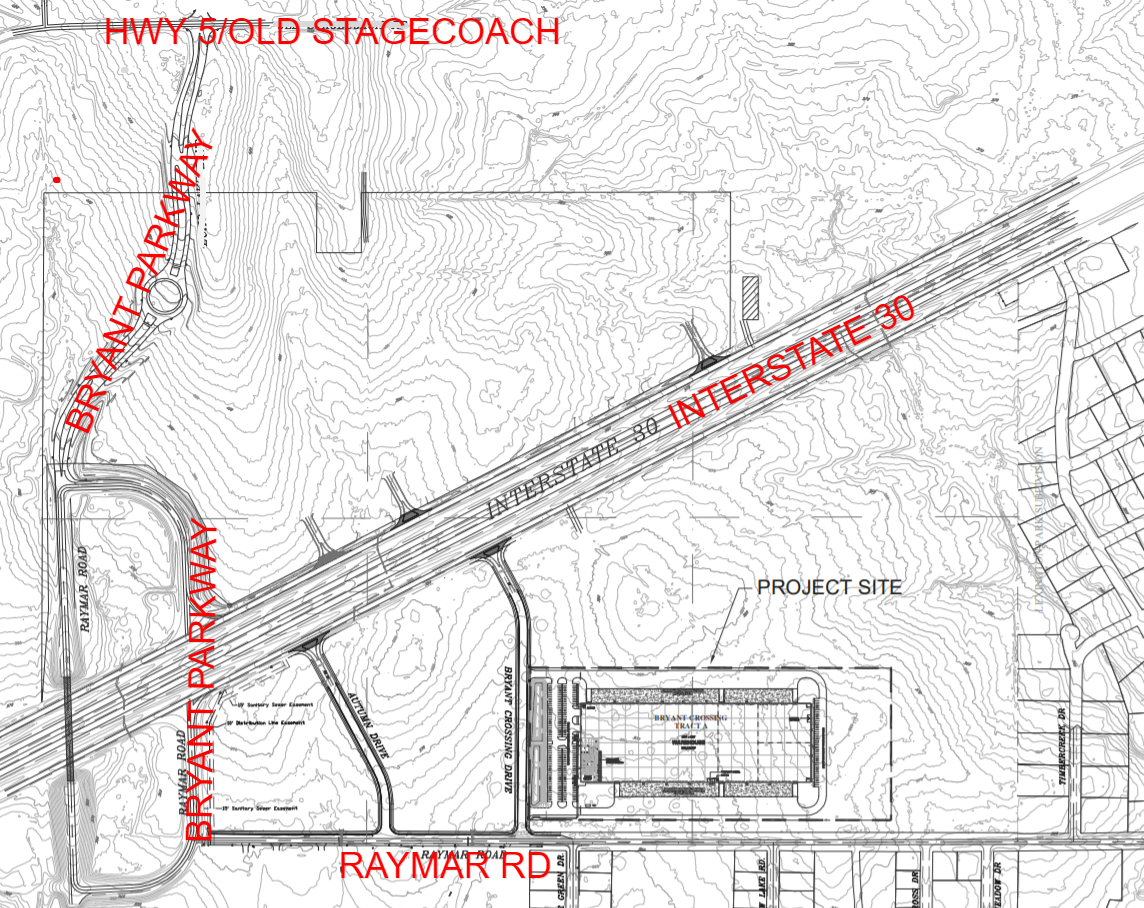 Bryant neighbors near Interstate 30’s Exit 124 are organized in their opposition to a company’s plans to build a very large warehouse at their front door. The neighborhoods connecting to Raymar Road have residents who say they don’t want the warehouse because they are concerned about their quiet community becoming subject to the nuisance of industry and trucking noise and traffic.

One neighbor, Pete Thompson, has put together a flyer detailing the proposal and company. Residents have formed teams and are distributing the flyer to over 500 of their neighbors to encourage them to come to the City of Bryant Planning meeting Monday, Dec. 9th at 6pm. 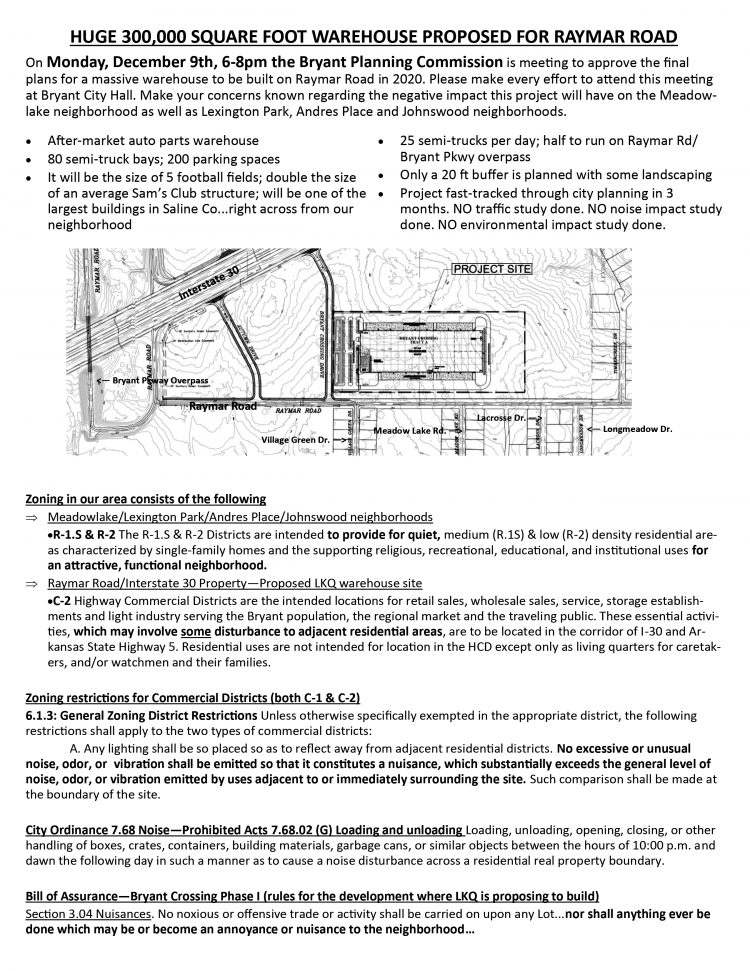 The company looking to build is LKQ, a nationwide distributor of recycled auto parts. The planned structure is reported to 300,000 square feet. The links below are plan documents submitted by LKQ representatives (White Daters and Associates) to the City of Bryant Development Review Committee, seeking their recommendation for approval of the plan. That Committee has not made a recommendation one way or the other. Residents will have the opportunity to voice their opinion at the Planning meeting mentioned above.

We will update this article as more news comes.