The following is the original article concerning the purchase and demolition of Lincoln Square Shopping Center, and the subsequent rise of Kum N Go, and what happened to various stores in the process. You might enjoy the commentary and the trip back.

Readers have been asking me about this, and now I have a reputable source that says Lincoln Square in Benton will be demolished to make way for a new Kum & Go store.

I’m curious to know how this will affect the surrounding businesses, myself. Judy, the owner of Simon Says consignment shop, tells me they’re moving to Edison Avenue in June. They were forced to change locations before the demolition. But I wonder about Frederic’s Salon, ShoTime Printing, and Al’s Barber Shop. And then there are Denton’s Plaza businesses right there on the corner as well. We shall see… 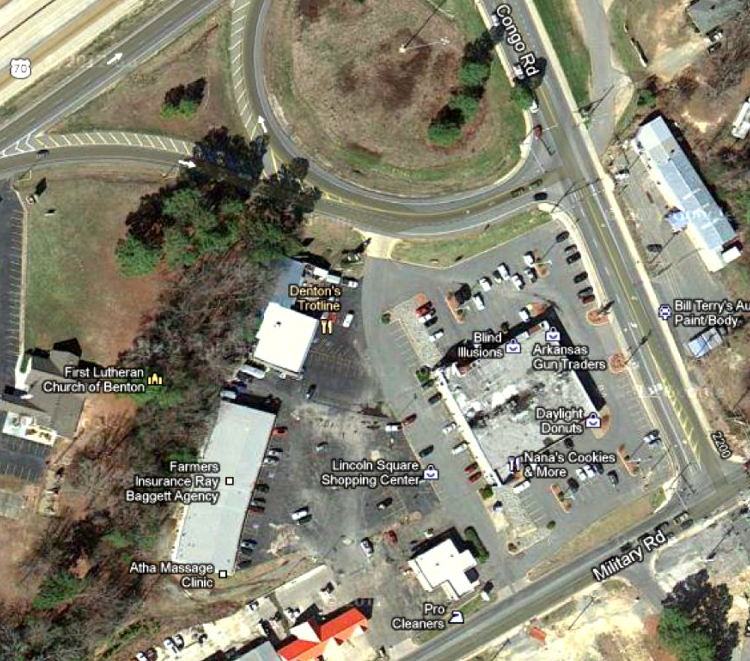 COMMENTS ON THIS BLOG FROM PREVIOUS VERSION OF MYSALINE:

TCBY opened its 3rd store there

Sad to hear about this, but progress must have its way, I suppose.

I wonder if Denton’s Trotline will stay.

I heard that there was a possibility of a Motel 8 there as well. I’d rather have the individual local merchants.

I’m with you, Susan.

Lori, I spoke with Robert Denton just now and he says he will miss the merchants that are currently in Lincoln Square. He isn’t excited about construction, considering how Military Road improvements have made a mess of things for some time, but it’s progress and he anticipates it will eventually be good for business.

I’m glad to hear Denton’s is staying it seems to have become quite the hot spot.

TO BE DEMOLISHED FOR KUM & GO:
Lincoln Square is just the large building on the corner (with the lighter gray asphalt).

NOT TO BE DEMOLISHED:
Denton’s used to own the strip mall to their south (with the darker gray asphalt) and that strip + Denton’s was called Denton’s Plaza. I don’t know what the new owner is calling that strip mall now. The Google map says “Lincoln Square Shopping Center” right in the middle of both the dark and light parking areas, but Lincoln is only to the right of that label.

I love Kum & Go gas stations. They are popping up all over AR. Great slushees.

Shelli Poole on May 19, 2013 at 7:13am
Meghan, it sounds like you need to call the city about the reckless drivers on your street. Let them know that if they can keep one child safe, it’s worth whatever steps they need to take. I’d call your alderman, the Mayor’s office and the Police Department.
Victoria Powell on May 20, 2013 at 8:36pm

The name of what was Denton Plaza is now Washington Plaza. I thought it was clever considering Lincoln Square, but now that it will be no more, I think the name is lame.

Good point, but changing the name now to fit the Kum & Go station probably isn’t a good idea either!

On December 17th, 2013, Lincoln Square would be no more. That rhymed and I feel like I should round it out with a few more lines, but I lack motivation due to my illness Or brain damage or something. Thanks to Ray Baggett for these historical photographs taken in Benton Arkansas. 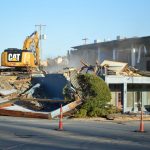 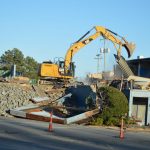 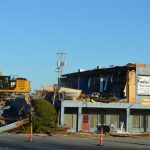 COMMENTS ON THIS BLOG FROM PREVIOUS VERSION OF MYSALINE:

I had no clue it was THIS close to happening. I just heard the rumor it was coming down.

I’m looking back at what I wrote and I must be delirious. I don’t see anything that rhymes either. I’ve been ill (not sure what my deal is) and it’s making me loopy.

Petz Pets , I remember going in there several times .

Mark, do you have any old pictures of your store there or of the building?

How about this:
On December 17th, of the 2013’s,
Lincoln Square was smashed to smithereens.
Daylight Donuts will no longer make dough.
In its place will be a Kum and Go!

No more Al’s Barber Shop or Frederic’s Salon to do our hair,
Or Simon Says Resale for clothes for our kids to wear.

Splendid! Maybe I was seeing into the future when I said something rhymed.

The following is what happened to many of the stores from Lincoln Square. If you have any other info about Lincoln Square businesses, comment below.