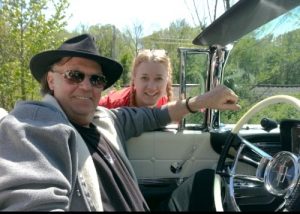 The following is a collection of blogs from a previous version of MySaline.com. It includes photos, radio interviews, and articles by others.

When an accident like Exxon-Mobil’s oil spill in Mayflower happens, you expect some environmentalists to come to get their own eyeballs on how the situation is handled by the responsible party. I was surprised for who I did see while I was in Mayflower today, looking for photos. This guy is an environmentalist for sure, but he’s also a megafamous rock star. Here’s the story.

I was headed to the logistics office to check in with them before taking pictures. I had attempted to go straight to the spill site but the the foreman said I needed to get authorization. So I was waiting in line at the stop sign, wanting make a right onto Highway 89. I was next in line when I saw a gigantic old white convertible to my left, topping the hill over the railroad tracks on 89. It made a right onto N. Main Street, driving right by where I sat.

I whipped a U-ey in the street and bumped into a telephone pole trying to get turned around. Yes, I’m a big dork, but you already knew that so shush and let me tell the story.

<—You don’t really have to click to enlarge this pic. It’s so very irrelevant to the subject.

I followed the huge car – a 1959 Lincoln – down the road back to the Northwoods subdivision, where the pipeline had burst about a month ago, spilling oil and driving residents from their homes. I thought perhaps the obvious out-of-towner driver of the Lincoln would turn into the neighborhood to get their look at the work there. Nope. They kept driving past. I followed. They kept going. The road turned to gravel. They kept going. I flicked my headlights on and off. They kept going. l honked my horn as friendly as possible, so they wouldn’t feel threatened and think I’m a wacko chasing them (maybe I was, but nevermind that). I held my camera (phone) up and snapped off a few shots. I wanted to know what kind of car it was, and at this point, I wasn’t sure if I’d see it again. (I did.) 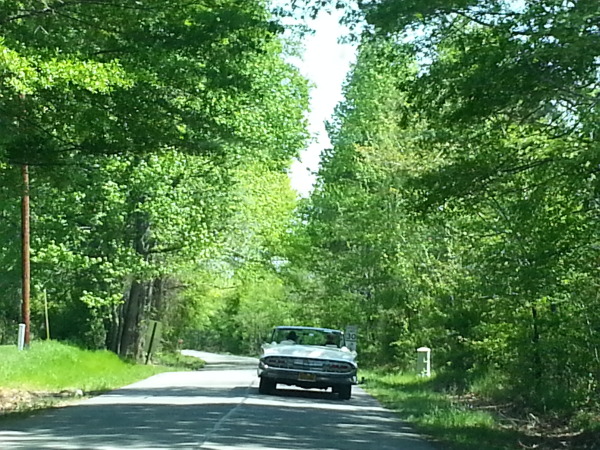 If you know anything about this car, you’ll know who the big rock star is. It’s not very prominent in the above photo, but if you look at the bottom right of the car, you’ll see a camera sticking out like a curb-feeler. The gravel road jostled that baby right off the car and they had to back up to retrieve it. At that point, I had already played the good neighbor and picked it up out of the road. They were grateful enough. I asked the gentlemen if they were looking for the neighborhood with the oil spill. I gave them my card and said I had wanted to take pictures there but was redirected to the logistics office. The man driving the car was wearing big sunglasses and some kinda Indiana Jones hat, but it was obvious to me, it was Neil Young.

Neil and his passenger/assistant, Ben, were headed to the Northwoods subdivision to get some video of the spill site. I’m not sure what else he wanted to do there, but in our short conversation, I agreed to lead them back to the opening of the neighborhood. I also decided that I was there with a camera and came from a short way to get photos for a local blog whereas, they had come across America with two large cameras and had a little more weight to throw around both before and after any video was taken. It was best for me to respect that Neil Young wasn’t here to be a spectacle, but was interested in seeing for himself what exactly was happening with the spill.

However, I wasn’t leaving without asking for a picture with Neil. I mean, Hey Hey, My My. Right? 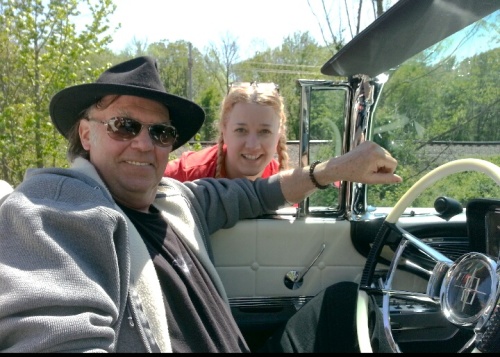 I have to say though, that if they weren’t looking to attract attention, that giant car wasn’t doing them any favors. It brings up a point. If Neil Young is about being green, what’s he doing driving a land yacht like that? It’s gotta eat gas like a crazyhorse. I did a little research and found that there is much more to that car than I saw. This car, measuring 19.5 feet long and weighing 2.5 tons, is a hybrid and gets about 100 mpg. Have a look at the video below, where Neil explains in 2008 that he is in the midst of building this car, and that there are cameras all over it to keep sending data to the number crunchers – not as a “camera for old men backing up the car” as I might have sort of suggested to him.

The name of the company for this project is LincVolt. You can go to www.LincVolt.com and see explanations and photos and videos of the car and its purpose.

This page of the site was of particular interest to me, since it explained why all those cameras are on the car and gives you an idea of the paradox that is efficiency in a large vehicle.

“The Lincvolt team is proving a propulsion system right now that performs with a higher efficiency than any cars we have seen or heard about, and our car is twice the size of those cars with much more power.

There will always be big people that need big cars to travel long distances smartly and efficiently and we are answering that demand with a propulsion system capable of delivering smart powered SUVs and trucks.

Lincvolt has a propulsion system that out-performs the not yet released Chevy Volt and Chrysler series hybrids in power, MPG and overall efficiency. We have more than twice the power with superior MPG on our “long ranger” systems, capable of running on a variety of petro and bio-fuels and natural gas. Smart efficient cars and trucks can be big and safe, carrying huge payloads and performing tasks not anticipated in current designs.

Lincvolt’s departure is imminent. The trip will prove our technology in a 2.5 ton 19.5 foot automobile, making automotive history with an extended range and mpg that has never been attained in a full size vehicle.

Lincvolt’s journey will be carried live on the web at Lincvolt.com, with live real-time statistics on the site. You will be able to view our location, MPG, altitude, speed, battery power, and generator activities as they happen. The public and the automotive community will be able to view our statistics and use the information for the common good. Stay tuned to Lincvolt.com for details of our historic trip across the USA. We will be available to local media on our route.

Thank you for believing in us!”

So there you have it. To learn more about the LincVolt project, connect on Facebook and Twitter.
Scroll to the end to see comments from this article.

The Arkansas Times liked the story and linked to it:

The Reason This Saline Writer Was in Mayflower Monday

A friend of mine noticed there have been trucks coming from the Mayflower oil spill site, turning onto Reynolds Road in Bryant and heading to our county landfill. This had me very curious to know why it was coming all the way from there to here. It’s kind of a distance. I know, because I drove it on Monday (and ended up meeting Neil Young).

I figured the best way to find out what’s going on is to just ask. So I emailed Michael Grappe, the Executive Director at the Saline County Regional Solid Waste Management District. (Why can’t they just call it a landfill?)

[EDITOR’S NOTE – a) It’s now called Recycle Saline. b) Because it’s not a landfill, it’s a county program that helps people recycle and rid of waste responsibly.]

ME:
The contaminated dirt from the oil spill in Mayflower appears to be going to our landfill in Saline. Is it? Where else might it go? What precautions are being taken to contain the crude so that it doesn’t spread?

Exxon, through an audit process, has deemed that we are the only landfill in the state approved to take their waste. This is purely a corporate direction approved and monitored by ADEQ at the Mayflower site around the clock during the Remediation process.

We are only taking oil bearing soil which is placed in subtitle D lined cell that prevents seepage outside the barrier, hence no ground water contamination.

At the site in Mayflower Exxon is reclaiming the oil and restocking it.

Here are the key aspects that I noticed in the reply and you can tell your opinion.

P.S. It looks like the Log Cabin Democrat out of Faulkner County is working on a big story… http://thecabin.net/latest-news/2013-04-23/send-us-your-questions-about-mayflower-oil-spill-and-its-impact#.UXgmorVwrSg

The Neil Young Story Has Legs (and MPG)

The Point 94.1FM and The Buzz 103.7FM both interviewed me about the Neil experience.

Scroll to the end to see links to local and other news sources that picked up this story!

Yes, this is the bumper that bore the brunt of the very vertical obstacle (telephone pole) between me and the legendary rockstar + environmental dude, Neil Young, after “whoever was driving my car” whipped a zippy u-turn, having recognized said rockstar attempting to fly under the radar, albeit while he himself driving a spectacle in its own right, a 1959 Lincoln, 19.5ft long & 2.5 tons, yet garnering 100+ mpg. I like run-on sentences for drama. See www.lincvolt.com for info on the amazing engine that propels that car, and is part of the reason for Mr. Young’s visit to the Mayflower, Arkansas oil spill. P.S.,  As the title would suggest here, a Magic Eraser combined with a dab of H2O and a bushel of elbow grease took the telephone pole’s blood right offa that there bumper. (passenger side) Killer diller.

“Before” photo with telephone pole smudged on it: 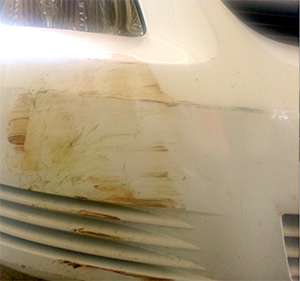 If you’re so inclined toward finding new energy sources, have a lookat this special…

Did you have your pants rolled up with your argyle socks on?  I hope your represented AR well. BTW, very cool story.

That’s awesome Shelli, on all counts!

Carla, I did not have my pants rolled up but as you can see, I was representing with the Laura Ingalls braids.

That’s what Willie told me.

guess you didnt tell him a southern man dont need him around anyhow!!    a great story!!  love it when the unexpected turns out to be good.

That’s the best!  made my day to read about your adventure.

Very interesting Shelli.  Kudos to Neil Young. I’m also a musical fan. I checked out the lincvolt website, also interesting especially the articles about Henry Ford trying to develop an electric type car as early as 1915 together with his friend T. Edison.  The piece titled “What WE’re Up Against” was really noteworthy mainly because it addresses the corruption associated with our govt and the oil industry. And yet we wonder why our little county sheriff’s office here is so “drunk on power!”

RELATED STORIES IN THE MEDIA: