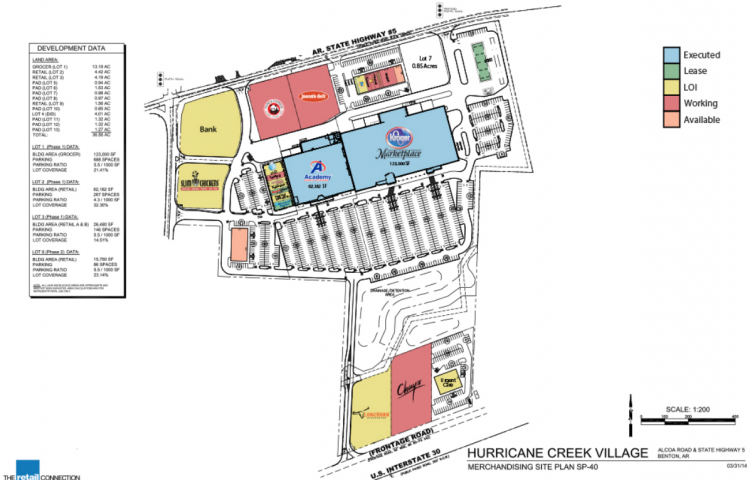 We’ve been talking about this huge project since 2011. It’s to be called Hurricane Creek Village and you can definitely expect a Kroger Marketplace and an Academy Sports in the big block of land bordered by Interstate 30, Alcoa Road & Highway 5 North. There’s a jigsaw border there between Benton and Bryant. The big development called Alcoa Exchange that went in across the Interstate a few years ago was built mostly on Bryant land. This development will be on Benton territory.

You might also expect some other known businesses to sign on with this new property. The Retail Connection‘s site plan shows letters of intent from Longhorn Steakhouse, Slim Chickens, Urgent Care, Tropical Smoothie, Tide Dry Cleaning, AT&T, a bank and a nail salon. Other store deals that are in the works are Jason’s Deli, Panda Express, Chuy’s, UPS Store and a tanning salon.

The development hope to be ready to open next summer and construction begins with a groundbreaking ceremony, 8:00 a.m., Friday, onsite.

Weird. It didn’t show up under the Arkansas search earlier. Here’s the new link for the site plan.

However, you’ll see from this October 2012 blog that there was a link to a site plan on The Retail Connection’s website and the link goes nowhere now.

I’ve not heard that it’s off the table. No word one way or the other.

Any word about the shopping center that is supposed to go at the US67/Haskell exit?