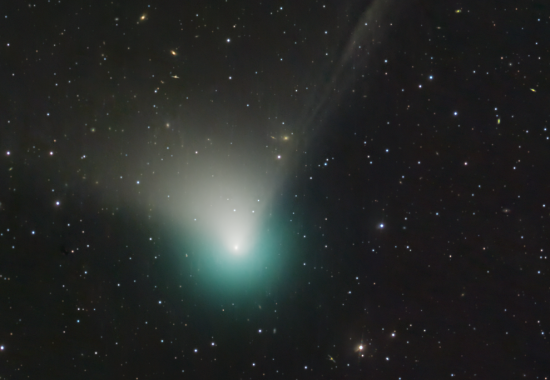 The green comet is pictured from December 19, 2022. Image Credits & Copyright: Dan Bartlett See the full size photo at this link.

A comet will come as close to Earth as it ever has, between Wednesday, February 1st to 2nd, 2023. The  Green Comet will visit about 26 million miles from Earth. That may seem pretty far away, and it is. Consider that Earth’s moon is 238,900 miles away – this comet will be 1,000 times farther. For all the Americans, that’s roughly 45o million football fields long, not counting the end zones.

This comet’s name is C/2022 E3 (ZTF), but we’re going to stick with calling it the Green Comet. (Even if it does sound like the Green Lantern stole Supergirl’s horse. Go ahead, look it up.) Green Comet was discovered nearly a year ago, in March 2022. It is not currently visible with the naked eye, but it has gotten brighter since it was first discovered, and it could become visible without a magnifying device.

Experts say this is the closest the Green Comet will have come to Earth since 50,000 years ago. You may ask how they came to that conclusion. We have to assume that no one took a picture then. So the answer is math. Scientists estimated the Green Comet’s last visit, based on its current path and speed. Do supposed the lack of light pollution would have enabled an Earth inhabitant to clearly view it at the time?

At any rate, in order to see it this time, look to sky in the early morning on February 2nd, in the north to northeastern direction. If you don’t have a telescope, or if for some reason lights or weather don’t cooperate, you can still view this Green Comet, thanks to the Virtual Telescope Project. Find this celestial event live streaming on their YouTube channel.