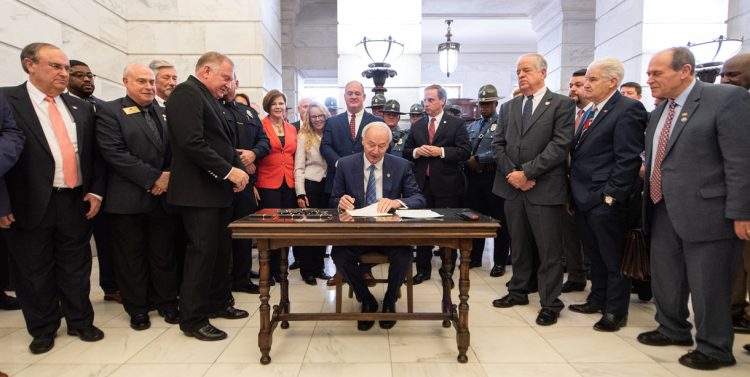 Law enforcement leaders and legislators gathered in the second-floor rotunda at the state capitol today as Governor Asa Hutchinson signed a bill that grants one-time stipends of up to $5,000 to police and probation and parole officers, and a second bill that increases the salary for Arkansas state troopers and other certified law enforcement officers of the Department of Public Safety.

“This was a public service session in which we showed our appreciation and the value we place on our law enforcement officers,” Governor Hutchinson said. “There’s not been a session of the legislature that’s done more to my knowledge for law enforcement.”

Over the past seven years, Arkansas has improved its parole and probation system, mandated crisis-intervention training for officers, and upgraded the state’s 911 system.

“Our support for law enforcement did not begin with this session,” the Governor said, “but we certainly put an exclamation point on it this time.”

Senate Pro Tempore Jimmy Hickey sponsored the bill in the Senate, and Speaker of the House Matthew Shepherd carried it in the House.
House Bill 1026 increases the average annual starting salary for state troopers from $42,357 to $54,000.

HB1206 also funds salaries for five more forensic so that the Arkansas Crime Lab can complete testing of sexual assault kits within 60 days as required by Act 839 of 2019.

Governor Hutchinson also signed Senate Bill 101, which amends the Revenue Stabilization law in part to fund the increase in state troopers’ salaries. The bill also funds an increase in the Department of Corrections budget to bump the reimbursements to county jails from $32 per day to $40 per day. SB 101 also includes money to fund a prison construction project at Calico Rock, improvements at the schools for the deaf and blind, and the Northwest Arkansas Veterans Home.

SB 101 provides $10 million for body cameras, bullet-proof vests, and other equipment “that will make our officers safer and build community confidence in their professionalism.”
The new laws were the result of recommendations from the Task Force to Improve Law Enforcement that Governor Hutchinson created after the death of George Floyd. The task force recommended that Arkansas should pay competitive law enforcement salaries and create a grant program to increase public confidence in the training and professionalism of Arkansas’s law enforcement officers.

“No responsibility is more important for government than to assure public safety,” the Governor said. “Our police officers are risking their lives… and they deserve our support and thanks.”