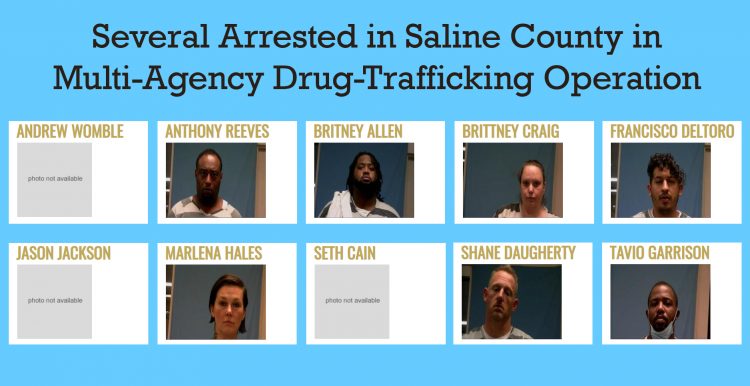 A sweeping law-enforcement operation that involved numerous agencies and targeted members of a drug-trafficking organization responsible for the distribution of multiple kilograms of methamphetamine, heroin, and cocaine in central Arkansas resulted in more than a dozen arrests Tuesday morning.

The organization is alleged to be led by Britney Allen, 33, of Jacksonville. The indictment, which was returned by a Grand Jury on Sept. 11, 2020, and unsealed Sept. 22, named 20 other defendants alleged to be part of Allen’s organization. Law enforcement officers arrested 13 individuals in the early morning hours and served an arrest warrant Tuesday on one defendant already in state custody. Seven defendants are currently considered fugitives (scroll to the end to see defendant list).

This investigation, named Operation Wagon Wheel, was the result of several law enforcement agencies, led by the Drug Enforcement Administration (DEA), attacking the drug-trafficking organization on multiple fronts. During the investigation, which began in 2019, the DEA utilized court-authorized wiretaps to intercept hundreds of drug-trafficking calls, primarily involving Allen. Law enforcement officers, including DEA agents and several local police departments, conducted more than 10 controlled purchases of methamphetamine or heroin. Numerous seizures following local police arrests occurred as well. More than 10 kilograms of methamphetamine, and multiple ounces of heroin and cocaine have been seized, along with more than $50,000. At least eight firearms have also been recovered from the organization.

“This operation has taken 21 drug dealers off the streets of our communities,” stated Cody Hiland, United States Attorney for the Eastern District of Arkansas. “Drugs and violence go hand in hand, and removing firearms from these offenders is a major step towards creating a safer community. We will continue to work with our federal, state, and local partners to keep our district safe from the violence that accompanies drug trafficking.”

“The Postal Inspection Service will spare no effort to disrupt criminal enterprises and present those involved for prosecution,” said Ketty Larco, Acting Inspector in Charge of the Fort Worth Division. “Postal Inspectors are committed to disrupting the activities of those who use the U.S. Mail in the course of their criminal activities. These arrests represent a commitment to safeguarding the Postal Service and its customers, and we appreciate the excellent work by the U.S. Attorney’s Office in addition to partnering federal and local agencies.”

Officers also executed search warrants at various houses alleged to be used by Allen and his associates to house and distribute drugs. The DEA coordinated with numerous local police agencies to adopt state charges into the overarching federal case. In all, the 21 defendants are named in 48 different counts.

The defendants include multiple individuals who have previously been convicted of state felonies, including prior convictions for drug trafficking or firearm possession.

“The damage caused by drugs and violence affects everyone across the nation, including here in the Eastern District of Arkansas,” DEA Assistant Special Agent in Charge Justin King said. “Our neighborhoods deserve to exist without fear and intimidation inflicted by violent drug gangs. The indictments and arrests of these individuals should be a warning to others who prey on the weak and defenseless through their drug trafficking and violent acts. We will continue to work with all of our law enforcement partners to relentlessly pursue these violent criminals and drug traffickers plaguing our communities.”

The defendants arrested today will appear before U.S. Magistrate Judge Patricia S. Harris on September 23, 2020, at 2:00 p.m. for plea and arraignment. The case, docketed as Case No. 4:20CR00267 DPM, is pending before U.S. District Judge Lee Rudofsky, and the trial date will be announced at plea and arraignment. The case is being prosecuted by Assistant United States Attorney Chris Givens. 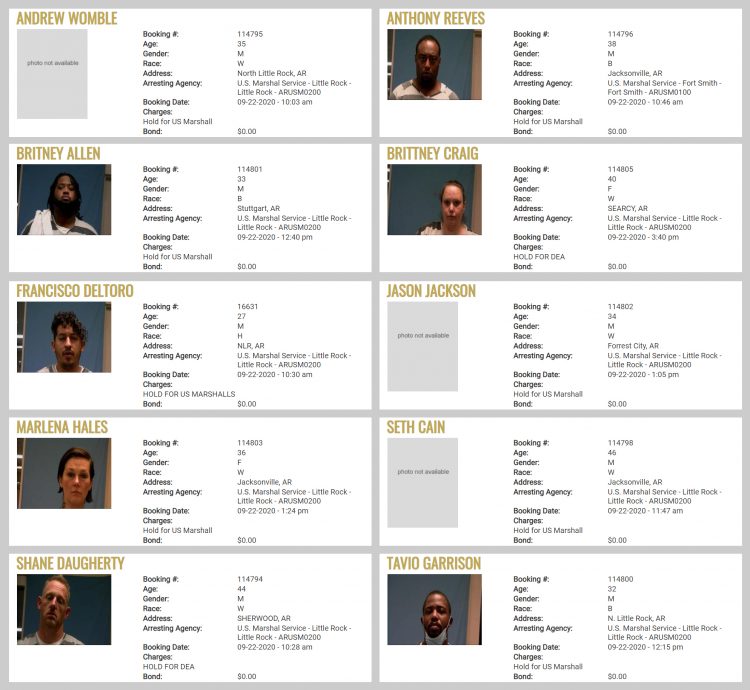 Individuals below in orange are being held in Saline County custody.

The defendants charged include:

An indictment contains only allegations. Defendants are presumed innocent unless and until proven guilty.