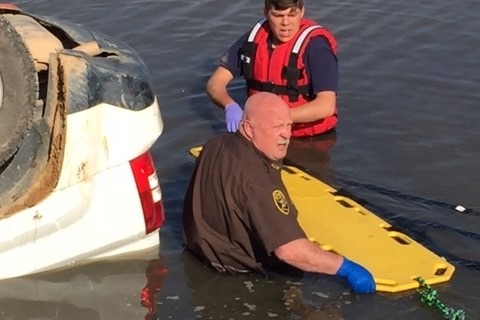 After a Sheriff’s Deputy learned he has throat cancer, a local law enforcement organization created a fundraiser.

Dep. Jack Campbell of the Saline County Sheriff’s office is used to helping others since starting as an officer in 1999, but now he is the one who needs help. Jack is the one who was awarded the Law Enforcement Officer of the Year Award by Attorney General Leslie Rutledge last year for his constant efforts to help the citizens of Saline County.

He was diagnosed with throat cancer in August and has been driving to get radiation treatment in Little Rock on a daily basis. Meanwhile, he still has his regular job as the sole code enforcement and animal officer for Saline County. On top of that, he is the caretaker for his mother.

Campbell’s law enforcement family has set up a fund for his expenses related to his medical treatment. Members of the Saline County Deputy Sheriff’s Association (Lodge #73 of the Fraternal Order of Police) have set up a Go Fund Me account so the public can give back to him.

“Jack has always gone well above and beyond his call of duty to help anyone that he was able to, and it’s time that we do the same for him,” stated Lt. Joe Traylor.

Many in Saline County have encountered Campbell after having issues with a loose cow, a chicken attack, neglected horses and more. I personally was Jack’s neighbor at one time and witnessed him take care of a baby deer in distress, along with having to take a vicious dog away from the neighborhood. I have also been pulled over by him, and he was as nice as can be.

According to the fundraiser description, Jack has received numerous complimentary letters from citizens and countless accolades from Sheriff Rodney Wright, each time his response is the same: “I’m just doing my job, sir.”

Please, let’s help him out with whatever amount you can afford, and then share this article also. Here’s the fundraiser link: https://www.gofundme.com/f/jack-campbell-benefit-fund