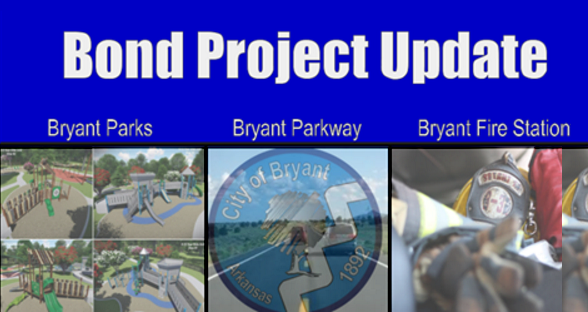 Bryant Mayor Jill Dabbs has released a timeline announcement for projects to be completed under the bond that voters approved in August. The following is the letter Dabbs distributed to media on Wednesday March 29, 2017.

From the Desk of Mayor Jill Dabbs

On August 9th, 2016 Bryant voters approved a bond refinancing which allowed the city to redirect $23 million toward some much needed improvements in parks, fire, and streets.  A lot has been going on since that election to get these enhancements underway!

Let’s take a look at the timeline and some exciting updates.

This week, the city will receive a recommendation on shade structures after meeting with White-Daters, Baldwin & Shell and Black Corley Owens.  These structures will be the first of major upgrades to the grounds at Bishop Park in regard to the bond money.  Ken, with Black Corley Owens, is continuing to work with the Parks Director and staff to finalize changes that will be made to the actual center at Bishop Park.  On Friday, the Bryant Parks Department along with Mickey from Baldwin Shell will be meeting with an equipment representative regarding the all-inclusive playground at Mills Park allowing us to begin moving forward on that project.

The floor plans are now complete for our new fire stations, and elevations will be completed next week. These plans will be available for council review during the April City Council meeting. Property negotiations are continuing for both fire stations and park lands, and we are optimistic that a decision will be announced within the next 30-60 days.

Lance Penfield, with Baxley, Penfield and Moudy is moving toward finalizing right-of-way acquisition for Bryant Parkway South.  Garver Engineering is working out the alignment issues around the Saline County Airport and Alcoa obstructions. Garver is hopeful the feasibility study along with the preliminary environmental study on the southside will be ready to present to council in April.

As you can see, there is a lot going on behind the scenes to get these projects ready to roll out.  We are excited to keep you updated as our timeline becomes more exact.  If you haven’t already, make sure you sign up for City of Bryant notifications via the notify me option on our city website www.cityofbryant.com  to receive updates pertaining to this project as well as other news and events for the city.  For questions regarding this project you can contact the mayor’s office at 501-943-0302 or email [email protected] .