I went to the Bryant Farmer’s Market last Saturday. I took pictures of all the vendors there. I didn’t realize just how many exhibited their wares there. It is not all vegetables as the name would indicate. I believe it is open from 8 until noon officially. I will tell you that some of the vendors are there as early as 6:30 at times setting up. Depending on the heat, they may start packing up by 11am to go home. I stayed 2 hours talking and taking pics. Despite staying in the shade the whole time, I felt a bit yucky after that amount of time in the heat.

All kinds of tempting baked goods. I bought a berry cobbler which was loaded with raspberries and blueberries. There may have been a third berry. It was great with vanilla ice cream for Sunday lunch. 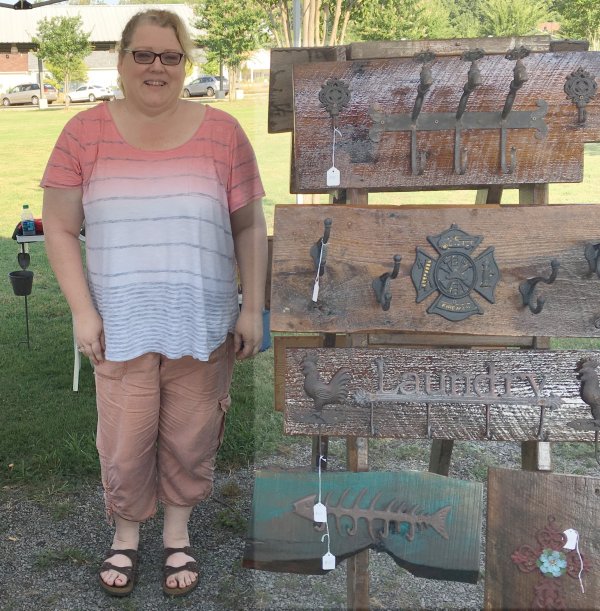 I bought from both of these vendors. I got a pot of banan trees.

My new wood plaque is in my dining room. My hubby picked a different one than I would have, but I like my bird hooks. The pictures: two of my grandchildren. I’m not a very good portrait artist.

Mostly canned goods with a rustic flair. Later, she will probably be selling the Halloween art work, too. 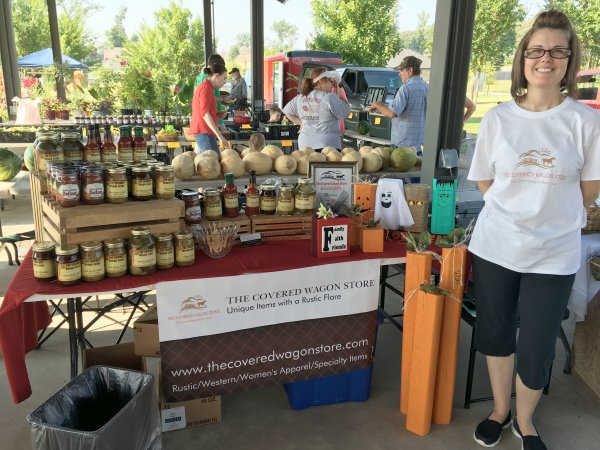 Anyone wanting a special pen or duck calls, Randy is your man! I got a bar of stain remover soap at this stand. While it did not remove all of the ink from the gel ball pen which broke and stained my car seat, it did make it a bit lighter. 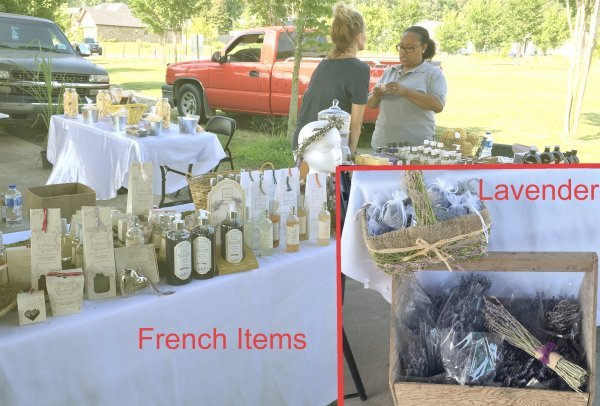 This gentleman makes a recipe handed down in the family, Granny Peg’s peanut brittle. It was very good – not as sweet and dense as the recipe that I make. It was light and crunchy. YUM. He was keeping all but one in his ice chest so the humidity would not get to it. The Guthrie’s are a first year farm family with organically grown vegetables. The eggplant and squash were so pretty. That is what I bought. There were other veggies. They had some other cutsey items as well for decorating. (It was really hard to get the Guthrie’s faces showing under the shady tent with everything else in the bright sun. But I am the one who insisted they pose that way) 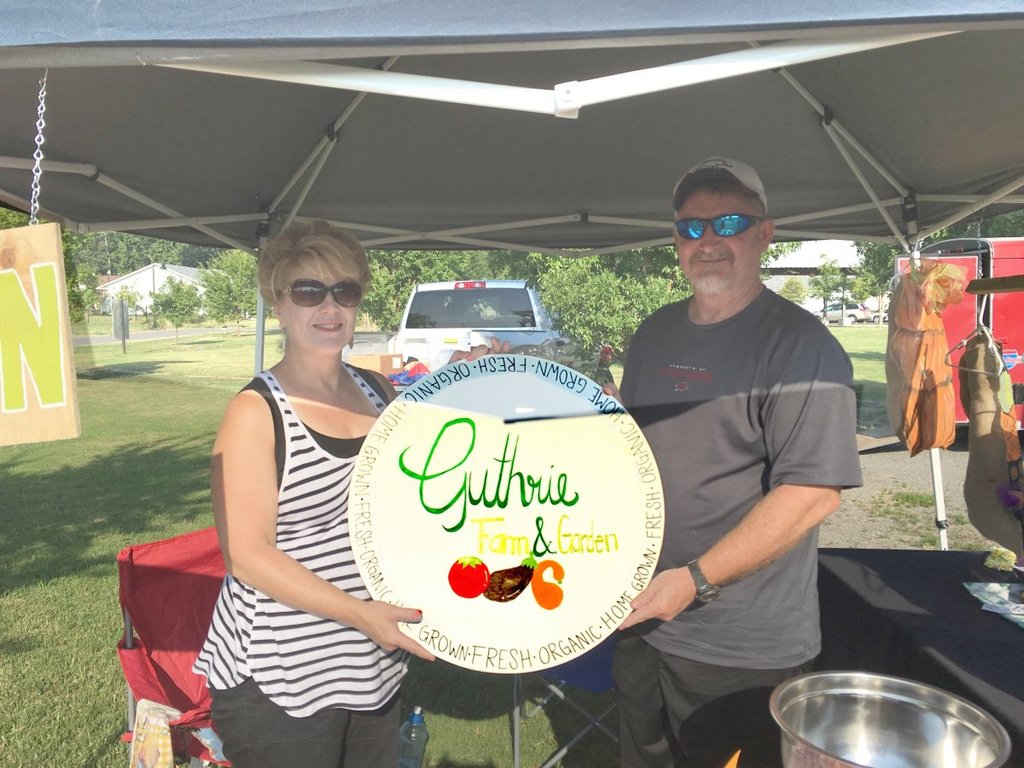 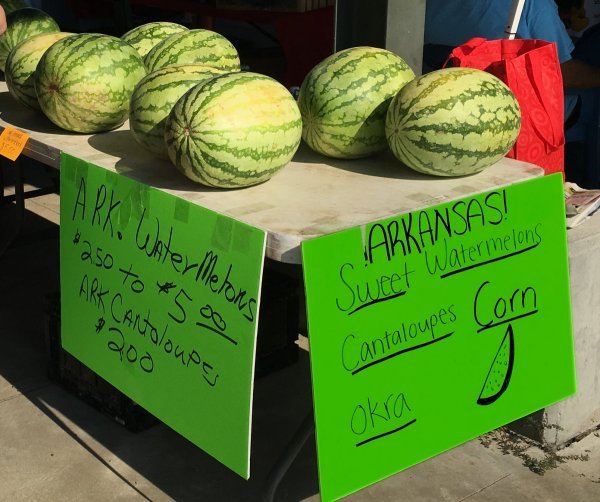 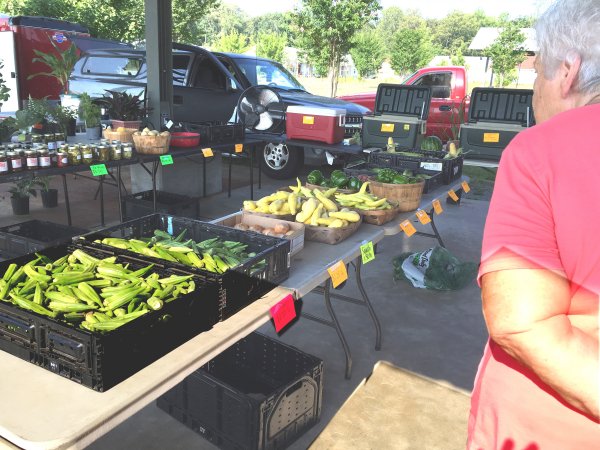 Mary’s Place had all sorts of stuff. I am partial to Richard”s honey. It doesn’t have all the bee pollen strained out. Allergies are most times helped by adding pure honey to your diet. And the bench below is from MP. 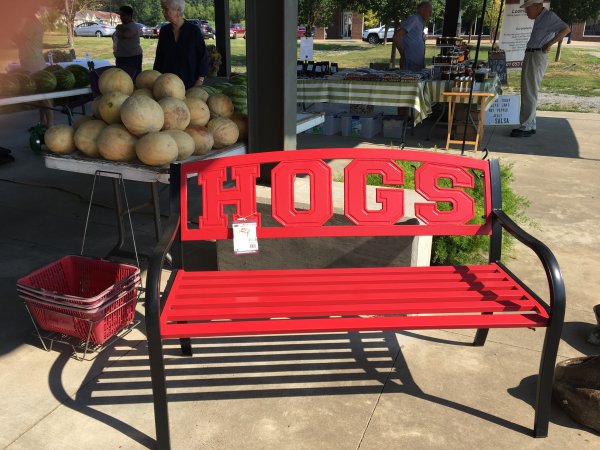 I tasted and considered it: SALSA – good! But I had already bought too much by the time I got to this booth. Cute wreaths. She will make to order. I really liked the frogs and owl. 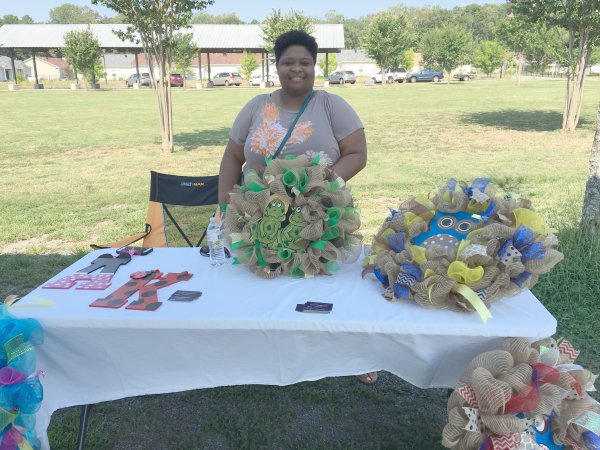 Fresh Pork, no hormones.They raise it themselves. USDA Inspected.  I bought country sausage. They were sold out of pork chops by the time I got there. It was so good. I already knew Krystal from her work at the Boys and Girls Club in Benton.

I almost missed this lady. She sells chocolate stuff like popcorn covered in chocolate. If you dawdle talking too late, people get hot and start leaving. Everyone was good sports about letting me take their pictures. 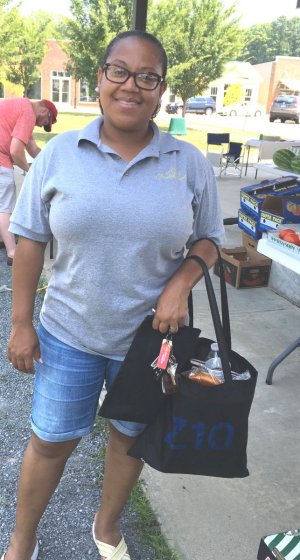 I hope that I put pictures of everyone I talked to in my article. ALL of these people are your fabulous neighbors. It was fun to talk to everyone. As a community, we need to support each other. If you need any of the items offered here, be at the Bryant Farmers Market Saturdays during the summer and maybe a month earlier and later 8- Noon. Go north on Reynolds Rd until it ends at Hwy 5. Go straight across at that red light onto Commonwealth. Go all the way to the end of the street. You can’t miss it.