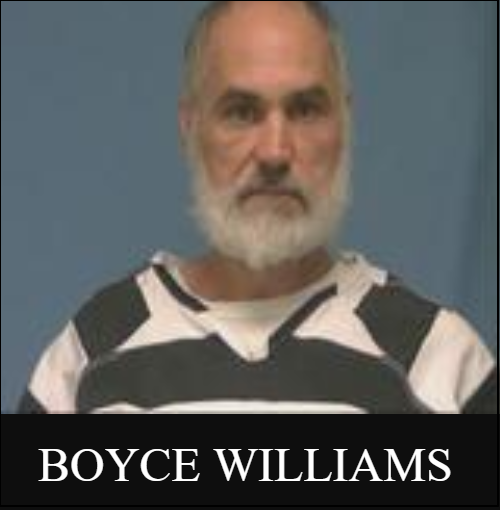 A Traskwood man got 100 years in prison after violently assaulting his ex-girlfriend and holding her hostage.

Prosecuting Attorney Chris Walton announced that on August 22, 2019, Boyce Wayne Williams, 45, of Traskwood was sentenced by a jury to 100 years in the Arkansas Department of Correction.

On October 20, 2018, officers with Haskell Police Department responded to the victim’s address where Williams was in the shower. He had held the victim against her will for several hours. When she was finally able to make a call she called 911 and immediately deleted the call while he was in the shower. Chief Michael Watson arrived and the victim told him she just wanted Williams off of her property and ordered not to return. Chief Watson ordered Williams to leave the property and not return as did the victim in Chief Watson’s presence.

During the morning hours of October 21, 2018, Williams busted in the victim’s upstairs bedroom and began yelling which awakened the victim’s teenage son. Her son came up to the bedroom where he saw Williams flipping the bed mattress with his mother on it and told Williams to stop. Williams then told her son, “that he would hit him,” but then apologized and convinced the boy that he was leaving, so the boy returned downstairs to sleep.

However, Williams put a gun in the victim’s mouth and told her “she better be glad it was a BB gun,” held a knife to her throat stating, “I should just slice your throat open,” cut her boxer shorts and bra off of her, held her down while he plucked hairs out of her nose, held his hand over her mouth to keep her from screaming, slashed holes in several pairs of her jeans, cut the wires to her air conditioning unit all while punching her in the head and threatening her.

Around 5:50 a.m. she convinced Williams that if she did not show up for work that her co-worker would come looking for her. Williams allowed her to get dressed, walked her out to her car and told her, “she had better not call the cops because he was going to work with her.” He left before her with a friend who came to give him a ride. While on the way to work, she secretly called 911 on speaker and requested they meet her at her place of employment with their lights and sirens off. Her co-worker testified that when the victim came in she was hysterical and looked like a “hot mess.” Williams came in shortly after and followed her to the back and told her, “you better not call the cops or I will kill you and everyone around you.” He then left. The co-worker heard this statement and would testify to it in court.

Chief Watson again responded to the scene where he was obtaining the details when Williams called the store. Chief Watson, who was wearing his body-camera, told the victim to put the phone on speaker and he recorded the conversation where Williams admitted to “slapping the victim, sticking a BB gun in her mouth and cutting her boxer shorts off of her.” At that point, Chief Watson informed Williams that he would be seeking a warrant for his arrest and ended the call. The victim would go on to stay in a women’s shelter until Chief Watson informed her Williams had been arrested.

During the one day trial, jurors heard from the victim, her son and daughter, her co-worker and Chief Watson. They were also able to see footage from Chief Watson’s body camera where he informed Williams he was not to come onto the victim’s property, and the footage of the phone call at the victim’s place of employment. Jurors also heard about Williams’ lengthy criminal history which included several violent offenses and weapons convictions and that he was currently on parole.

In addition, Walton argued that Williams “continually broke rules. He broke rules in prison, he violated his parole by committing new crimes, and he ignored a police officer’s order to stay away from the victim’s house.”

The prosecutor’s office introduced documents detailing criminal history dating back to the 1990s.

Finally, Walton argued, “Williams had used weapons in two of his crimes.”

“This is the type of man our office thinks should receive a high sentence,” Walton argued. The jury agreed and they gave him a maximum sentence of 100 years.