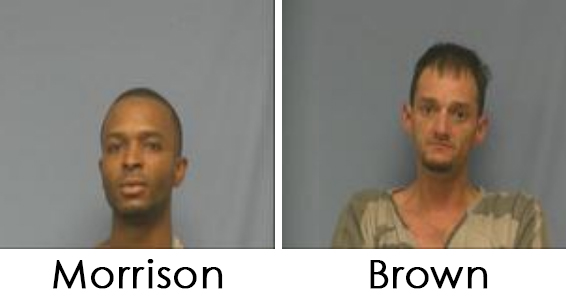 In response to citizen complaints, the Benton Police Department Special Investigations Unit, which is comprised of detectives from the BNPD and the Saline County Sheriff’s Office, conducted an investigation into suspected narcotics related activity at 324 S. Second Street in Benton. The investigation revealed evidence that methamphetamine was being distributed from the home.

As a result of the investigation, a search warrant was obtained and executed at the home just after 8:00 a.m. on Monday, December 18, 2017. Officers seized approximately two ounces of suspected methamphetamine, quantities of marijuana, assorted drug paraphernalia, and a loaded handgun from the home during the execution of the search warrant. Two individuals were taken into custody, and their charges are as follows:

Other arrests are possible in the near future as the investigation progresses. The Benton Police Department would like to thank the citizens for reporting concerns of illegal activity at the home at 324 S. Second Street.

Anyone with information concerning criminal activities conducted at the residence or with the arrested, are encouraged to contact the Benton Police Department at 501-778-1171 or 501-315-TIPS. Individuals also may send us anonymous information to CRIMES (274637) with the keyword BNPD in the body of the text or go to www.crimereports.com to leave a tip. A crime tip can also be submitted via the official Benton Police Department app found on iTunes and Google Play.