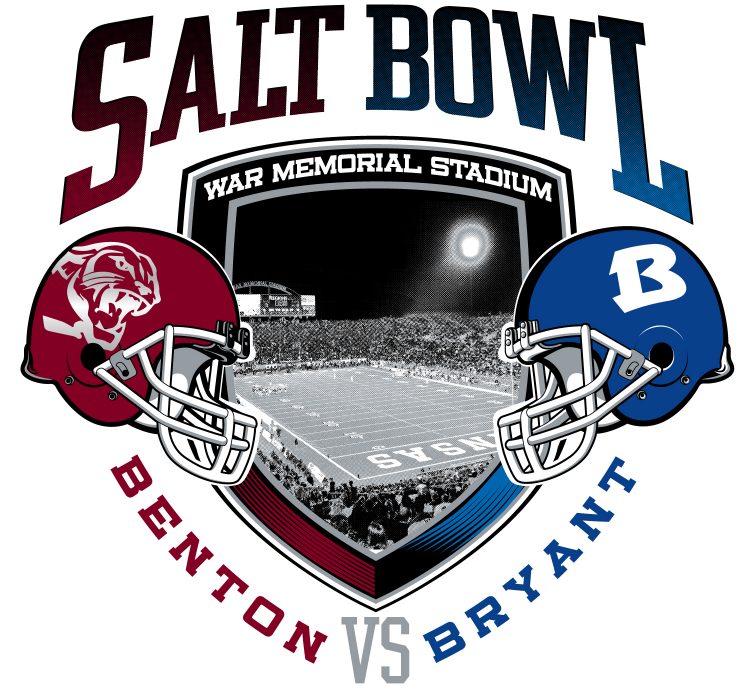 There’s that big beautiful logo. Isn’t she pretty? It wouldn’t even matter if it wasn’t designed well, because the beauty of it is that Benton and Bryant football fans have this milestone game each year to pay homage to the huge rivalry between the Panthers and Hornets. The Salt Bowl Committee has done their work in planning out all the details, and they have released the following statement: 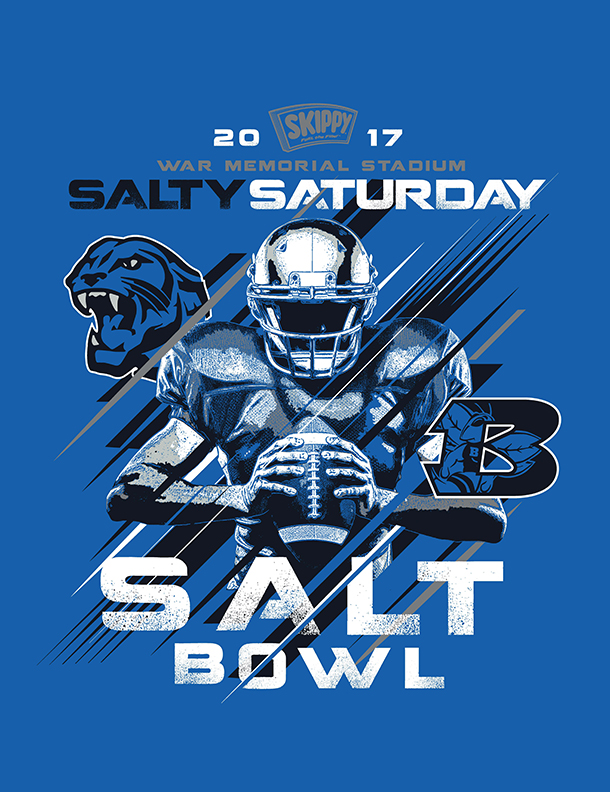 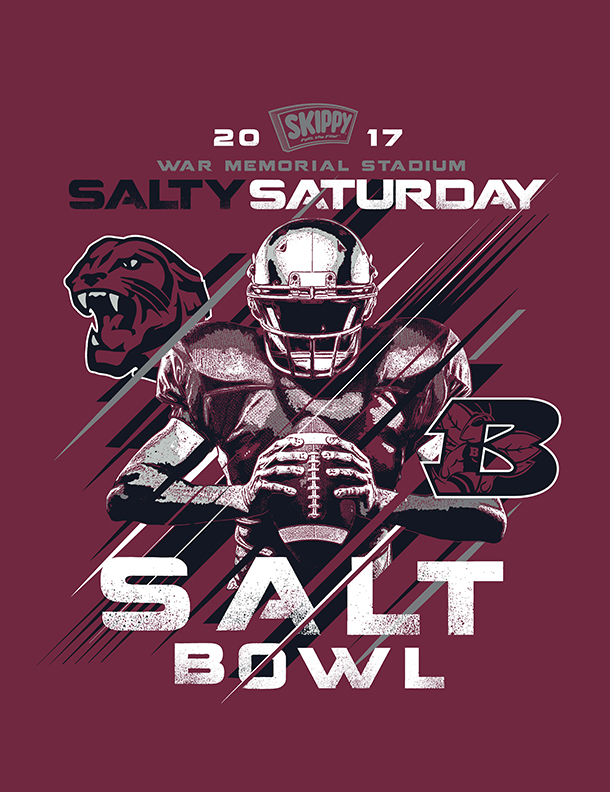 The Salt Bowl Committee is pleased to announce the plans and theme for the 2017 Salt Bowl game between the Bryant Hornets and Benton Panthers. As you will recall, last year’s game went down to the final play of the game in front of 30,613 fans at War Memorial Stadium when Benton was stopped 10 yards short of the end zone to preserve a 10-7 win for Bryant.  We expect another great game for Salt Bowl 2017.

The Salt Bowl Committee website is, www.saltbowlar.com.  The game and activities can also be followed Facebook, Twitter and Instagram @SaltBowlAR, we will be utilizing the hashtag #SaltySaturday to mark the first time the Salt Bowl will be played on Saturday night!

Tickets and t-shirts will go on sale Tuesday, August 1, at all Big Red Stores in Saline County.  Tickets are $10 each and include a Salt Bowl t-shirt.  The committee urges everyone to buy their tickets and t-shirts early. Tickets are available at the gate on the day of the game for $8, but that price does not include the t-shirt. Only AAA passes will be accepted.

For the first time this year, there are also Indoor Club Level tickets available, tickets are $25 which includes a Salt Bowl T-shirt and can be purchased at either the Benton Chamber of Commerce or Bryant Chamber of Commerce.  They will also have parking passes available for purchase for $25.

Starting today, go to Chick-Fil-A Reynolds Road in Bryant and sign up for the chance to be “Kickin’ for Chicken”.  Sign up between August   1 and game day, names will be drawn and they will be given the opportunity to kick a field goal at halftime to win a year’s supply of chicken from Chick-Fil-A.

Fans can also take their Salt Bowl ticket between now and September 30th to Chuy’s Restaurant and receive a free queso.  Available at both Chuy’s locations in West Little Rock and North Little Rock.

The Salt Bowl Committee is always pleased to be working again with three great organizations to give back to our community: The Arkansas Foodbank, The American Cancer Society and the Arkansas Blood Institute.

The Arkansas Foodbank will be partnering with Skippy Foods for the annual Peanut Butter Drive from August 14th through August 31st to provide food for those in need in our community.  Schools from Bryant and Benton will be competing to see who can donate the most peanut butter, with a goal of 25,000 pounds, and then Skippy Foods will again provide a matching gift.

The American Cancer Society will have its annual “Celebrity Waiter” event on Monday August 21st 5:00 p.m. at Larry’s Pizza in Bryant.  Come out and enjoy a great night of pizza, meet local celebrity waiters and waitresses, and give generous tips to help bring the fight to cancer.

The Arkansas Blood Institute will be holding Blood Drives at both high schools.  The Benton High School blood drive will be held on September 13th, and the Bryant High School Blood Drive will take place on September 7th.  Both schools will be competing for a trophy to the school that donates the most pints of blood.

A coaches’ and players’ press conference will be held at War Memorial Stadium at 5:00 p.m. on Monday, August 28th.  Coach Brad Harris, Coach Buck James and two players from each team will be available to speak about this year’s game.

There will be two community pep rallies at Everett Buick GMC the week of the game.  The Bryant Community Pep Rally will take place on Tuesday, August 29th, at 6:00 p.m., and the Benton Community Pep Rally will be held on Wednesday August 30th, at 6:00 p.m. as well. There will be free hot dogs, drinks and Kona Ice at each rally.  Drive Time Sports on 1037 The Buzz will broadcast live from Everett Buick GMC on Wednesday the 30th.

In addition beginning at 3pm, businesses, non-profits, churches, colleges etc. will be showcasing themselves, join us on the east side of War Memorial Stadium.  Also at 3:00 p.m., Saline County banks and credit unions will be passing out free hot dogs and drinks, and over 50 vendors will be set up to visit with and enjoy and Midtowne Church will be back with their Kids Zone of inflatables for the kids to enjoy!  If you are interested in a booth space, contact the Bryant Chamber of Commerce at 501-847-4702.

The gates into War Memorial Stadium will open at 5pm. Pre-game festivities will begin at 6:30 p.m. with recognition of the Future Panthers and Future Hornets and cheerleaders, as well as our Community Service Awards, the Rob Patrick Award and the Donnie Burks Award, all sponsored by Westrock Orthodontics.

At halftime, the cheer and dance squads will perform, the Benton and Bryant bands will again perform together, and we will have the Kickin’ for Chicken and Throw Like a Pro contests.