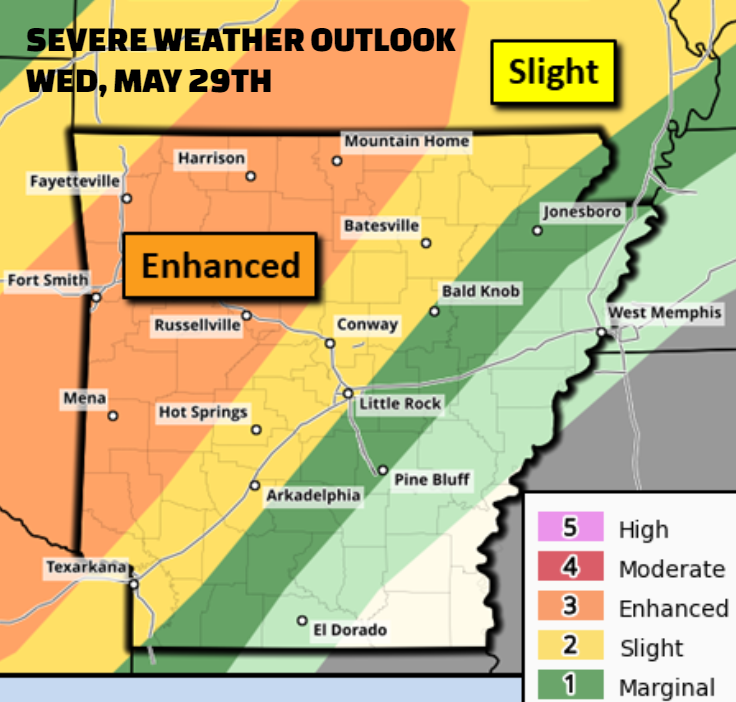 More rain will add to significant flooding is expected along the Arkansas River across all of Arkansas this week and into next week, according to Meteorologist Dennis Cavanaugh of the National Weather Service in Little Rock. The following is a flood statement and weather forecast for the next few days:

Flooding moves down river basins and crests relatively slowly from one location to another as a flood crest or wave moving down river. As of Tuesday afternoon, the Arkansas River was beginning to crest in far western Arkansas. The flood wave is expected to crest near Fort Smith at Van Buren on Wednesday. It is expected to crest at Dardanelle and Morrilton on Friday and Saturday, at Toad Suck on Sunday, at Little Rock on Monday, June 3rd, and at Pine Bluff on Wednesday, June 5th and Pendleton on Friday June 7th.

Major to record flooding is expected at all points along the Arkansas River in Arkansas. This will likely cause flooding of property near the river, especially in low-lying areas. Impacts will be felt well ahead of the forecast crest, so our best advice is to avoid going near the river, especially for any recreational purposes, during this period of high flow/flooding. A record flood is forecast along the Arkansas River from Toad Suck to points northwest. This flood along the river is expected to be the worst ever recorded flood along the river! Make sure to follow all instructions from local safety officials, and never drive past a barricaded/closed road sign. We want everyone to make it through this flood safely.

We realize that it’s not raining in Arkansas, yet this flood is ALREADY in the Arkansas River. It is going to happen, take precautions now to protect your life and property near the Arkansas river before it’s too late.

Adding to that situation, a round of heavy rainfall is expected to fall over parts of western Arkansas from Tuesday through Wednesday where 3-4 inches of rain is in the forecast. If this doesn’t amplify the flooding on the Arkansas River, it will at the very least prolong the flooding carrying significant impacts into the second week of June across the state along the Arkansas River. A flash flood watch is in effect for much of west central to northwest Arkansas Wednesday as a result of this heavy rain with ongoing river flooding.

Severe weather will also be possible with these additional storms with the primary threats being damaging winds, heavy rainfall and isolated tornadoes. The primary threat for severe storms is Tuesday night and again on Wednesday.