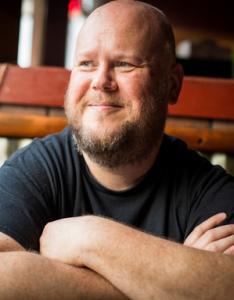 Aaron Sarlo will perform live in Concert in Benton on Saturday, October 14, 2017 6:00 – 7:00 p.m. at the Benton location of the Saline County Library. Aaron Sarlo is a musician and comedian from Little Rock, Arkansas, founder of the seminal power pop band Techno-Squid Eats Parliament and punk band, The Dangerous Idiots. A veteran of the stage, Sarlo has performed in front of thousands, at venues across the United States and Canada. Aaron came in second place in the 2017 World Series of Comedy regionals, held at The Loony Bin Comedy Club in April 2017, and performs stand up comedy around the South. This is an 18 and over program. Guests must have ID to attend. Everyone will be carded