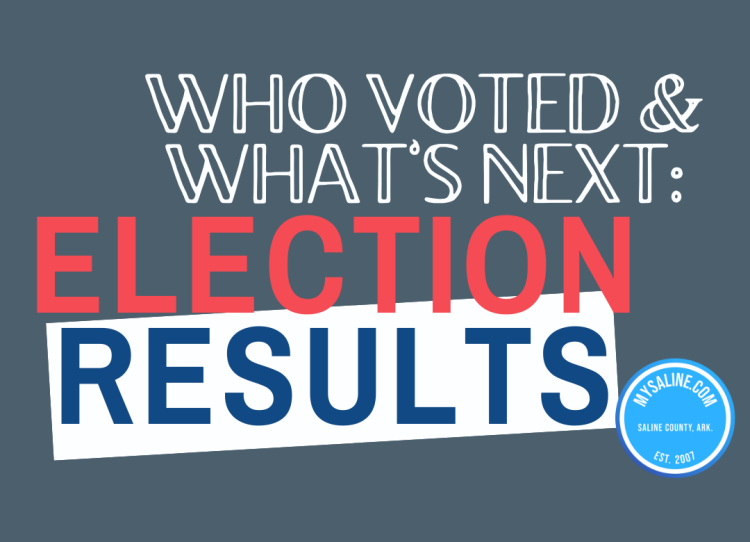 Do you want to see charts and color–coding and percentage comparisons? This is all that, and more! You’ll also see the candidates you need to be looking at for the next election. Well, at least the ones who have filed for office so far…

After months and months of political announcements, advertisements and online discourse about who is the best candidate, the 2022 Primary Election has decided who will represent their party in the next round. That round will be the November 8th General Election. Let’s look at some stats and find out who our Primary winners will face in the Fall.

How many of us voted?

Let’s cover some highlights from the Secretary of State’s report on voter turnout. That means how many of us are eligible to vote (registered, alive, etc.), versus the number of us who actually voted. Here’s a link to the table of all counties, ranked by voting percentage: www.mysaline.com/2022-primary-counties-turnout.

I wasn’t sure what to title this subsection, so I’ll just go with, “We’re Terrible at Voting and We Should Be Embarrassed About the Amount that We Complain.” 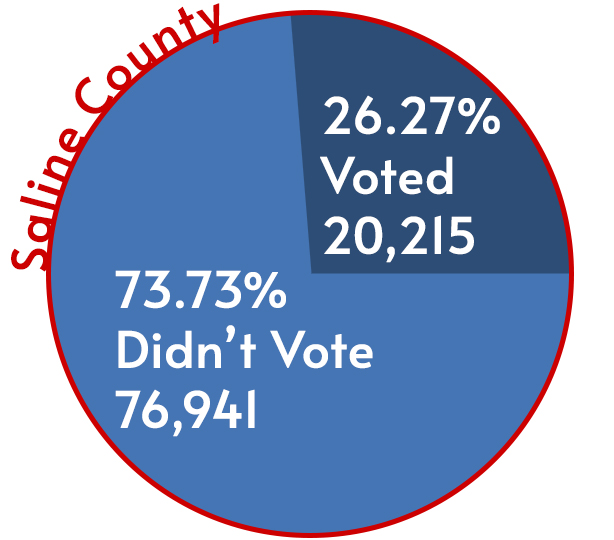 Saline County did only slightly better than the state average. There are 76,941 registered voters in the county. Out of that number, 20,215 actually voted in the 2022 Primary. That’s 26.27%. This abysmal number ranks our county at #55 out of 75 counties.

Compare that to Saline’s Primary voting other election years:

So we do see that voting percentages are higher in a presidential election year. Still, it’s well under half of the votes possible. Searcy County was the #1 county, with 44.41% of its registered voters actually voting.

Who is moving to the next round?

You can see the contest bracket of candidates at the following link to find everyone who was on the ballot for the 2022 Primary Election: www.mysaline.com/2022-elections-candidate-bracket.

For starters, there were 14 candidates that easily won their races, considering they ran unopposed. They were all Republican incumbents in county office. Voters must have liked them since no one challenged them.

On the other hand, if you didn’t like them, it didn’t bother you enough to run against them or find someone who would. I will take that back – in the County Clerk’s race, there was an attempt by an Independent candidate, Tonya Morgan, who hoped to run against incumbent Doug Curtis, but she didn’t get the required number of signatures to make it to the ballot.

In the candidate contest bracket, you’ll find those unopposed Primary candidates already resting in the Winner column. There are also several candidates who did not have an opponent in their party, but must still face the opposing party in the General.

The unopposed candidates aren’t the only ones who sailed to the November General Election. There are several Independent or write-in candidates. Because they don’t belong to an official political party, they don’t run in the Primary, regardless of how many of them there are.

There was one County race with three running, and that normally has great potential to result in a runoff. For a race to be won, that candidate has to get 50% of the vote AND and least one additional vote. In the County Treasurer race, Holly Sanders, our current County Tax Collector, is also good at collecting votes. She ended the Primary election with 64.62% or 10,528 votes, whereas her opponents Ragan Kyzer and Thomas Burchfield received 4,154 (25.5%) and 1,611 (9.89%) votes respectively.

A Judicial race was not close in the County, but it was a statewide position, so that made a difference. That made it very close. The numbers for State Court of Appeals District 6, Position 2 are now all in from every county at this writing,  but Judge Stephanie Casady already called to concede to Wendy Wood in the wee hours after the election.

The numbers in Saline County:

The numbers in Arkansas:

While there are a few numbers left to count in that race, it is not likely it will change the result. I’ll certainly come back and change this section if it does.

Ok let’s wrap this up. For Saline County voters on November 8th – not counting Municipal races, we will have 22 candidate races on the ballot. There are a few county races left that garnered opposition from another party. It’s mostly State and Federal races. We’ll also have some ballot initiatives to vote on in the General, but we’ll cover that in a separate article.

Return to the main page for Elections Info at:
www.mysaline.com/2022-elections/