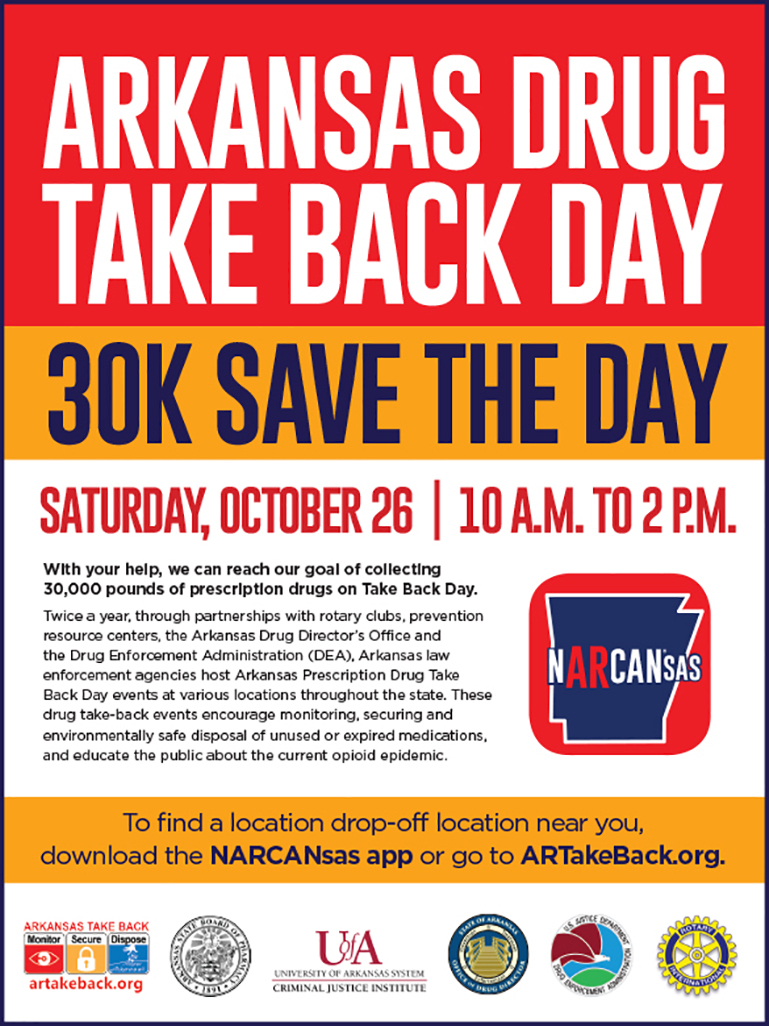 Among the many goals of the 18th Arkansas Drug Take Back Day is the opportunity for Arkansas residents to set a new record by dropping off 30,000 pounds of prescription medications. The“30K Save The Day” theme also promotes the overall goal of saving lives.

“We’ve come close in years past to reaching the 30,000 pound goal,” said Arkansas Drug Director Kirk Lane. “The more we can get people to monitor, secure and properly dispose of the medications, the more we can save lives through less accessibility of those that can intentionally or unintentionally abuse or misuse them. The educational opportunities about prevention with “30K Save The Day” is also an important goal, alongside the collection and environmentally safe disposal aspect.”

The “30K Save The Day” Arkansas Drug Take Back Day will be from 10 a.m. – 2 p.m. Saturday, October 26, 2019, and will include more than 250 locations across the state. Hundreds of volunteers and first responders will be at those locations encouraging citizens to dispose of unused or expired medications and officers will not ask for any identification or other questions regarding the prescriptions being dropped off. The prescription medications will later be counted for statistical purposes and destroyed at a facility in an environmentally safe manner.

Prescription medicines are a toxic waste and pose a danger to people, pets, and the environment if they are not disposed of properly. Medicines flushed or poured down the drain end up in the waterways, affecting our drinking water.

To find locations throughout the state, visit https://www.artakeback.org/take-back/collection-sites/ ) and type in your zip code. The site will continue to update locations throughout the month until the event date. While there, be sure to download the NARCANsas app- a free resource containing tools to administer naloxone, an opioid antagonist, in the moment of an opioid overdose and continued steps to save a person’s life. Though it should be used in an emergency situation only, Naloxone has no effect on non-opioid overdoses.
In Arkansas, there were 379 drug overdose deaths in 2016, which increased to 411 drug overdose deaths in 2017. Arkansas ranks second in the nation for per capita opioid prescriptions, at 107 per 100 residents; the national average is 58.7 prescriptions per 100 persons. In nearly a decade (since 2000) deaths involving opioids has increased by 200% in the U.S.

Two-thirds of teenagers & young adults who report abuse of prescription medications say they get the majority of the medications from friends, family & acquaintances.

The nARcansas app was created in a partnership with the Office of Arkansas Drug Director, Criminal Justice Institute, Division of Aging, Adult and Behavioral Health Services and Team Si. Naloxone is available for purchase by the public at pharmacies throughout Arkansas.