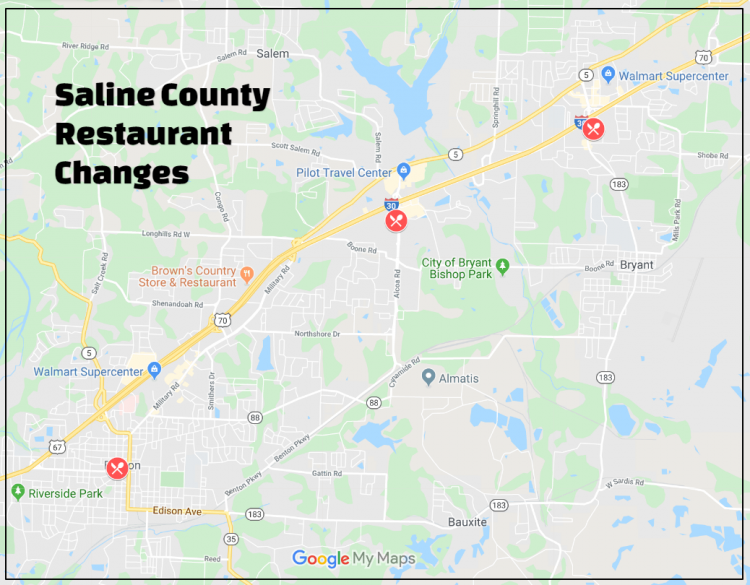 Two Saline County restaurants will close temporarily for renovations – each for about a month. Just Ice Cream in downtown Benton, and Chick-Fil-a on Reynolds Road near Interstate 30. Buffalo Wild Wings at Alcoa Road near I-30 has had their building sold. This info is all according to management at each restaurant.

I can’t tell you yet what’s in store for Just Ice Cream at 113 N. Market Street in historic downtown Benton. They are somewhat keeping it under wraps. But it’s going to be good for business. They closed their doors on Saturday December 21st and they hope to be back open in February 2020.

I can tell you what renovations Chick-Fil-a at 2232 N. Reynolds Rd in Bryant is making – you can see the plans in this link – but according to management, they don’t have a definite date to begin. So if you’re a fan, get it while you can.

There are other locations of CFA of course and you could also drive to Little Rock to get the Loblolly ice cream that JIC serves, but I’ll always encourage you to shop and eat in Saline County.

Now about Buffalo Wild Wings at 7206 Alcoa Road in Bryant…

A manager there stated that the building has been sold, but “as far as I know,” she said, the restaurant will stay.

The asking price shown at Crexi.com is over $2.5 million. It does not show as sold on the listing, nor does it show as sold in the County Assessor’s data online. It’s not hard to find poor reviews for this location on the internet, in fact, I believe they have taken down their official Facebook page. Some in the restaurant business say that a building being sold is the first step to tenants being ousted. That said, it’s possible if not probable that BWW could turn it around.

Watch MySaline for updates on these restaurants.